The Only Woman Running for President in Her Country 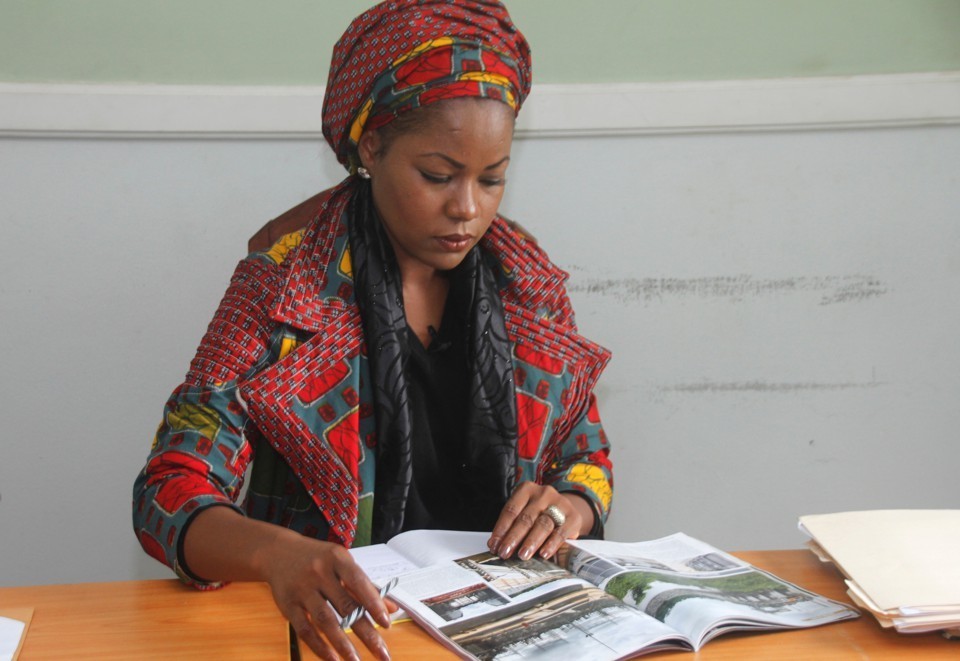 “What I saw in America, I tried to emulate in Liberia.”

The West African nation of Liberia will hold its general election on October 10th. It’s a significant moment for the country, which has suffered through not only 14 years of a bloody civil war that ended in 2003, but also an Ebola outbreak beginning in 2014 and falling commodity prices that have impeded its fragile recovery.

On the day of the vote, President Ellen Johnson Sirleaf will step down after 12 years in power. As the country’s first female president and Africa’s first elected female head of state, she’s enjoyed popularity abroad, but at home her administration has been dogged by accusations of corruption. Twenty candidates are running to replace her. Only one is a woman.

MacDella Cooper is that woman. Born in the 1970s in Monrovia, she spent her childhood between the Liberian capital and her family’s home in the countryside—until the violence of the civil war upended her life. Her stepfather was killed and her mother fled to the United States. In 1990, she became one of the hundreds of thousands of Liberians who fled their country and sought refuge abroad. She settled in the Ivory Coast before finally obtaining an American visa. She was 16 when she arrived in the U.S. in 1993.

Living with her mother in New Jersey, she won an academic scholarship to study electronic communications at the College of New Jersey. She then worked in Manhattan and began a career as a model. In 2004, she founded the MacDella Cooper Foundation, a charity dedicated to fighting poverty. She returned to Liberia in 2005 to confront the trauma of her past, ultimately deciding to stay. Our conversation about her experience as the only woman running for president, which follows below, has been edited for clarity and length.

Annabelle Timsit: Although you’re not currently projected to win the election, if you were elected, you would become the African continent’s fourth elected female head of state. What does that mean to you?

MacDella Cooper: It would be a great step in the struggle for the women’s movement. A lot of people talk about “women’s empowerment” across the continent—especially in Liberia. People talk a lot of talk but rarely take a lot of action. I think people who are serious about getting women involved will put financial support behind women candidates. A lot of people want to see women heads of state but nobody wants to financially support women-led initiatives—and by this I mean women’s political campaigns or political careers.

We need to start supporting women, not just morally, but financially, so that we can stop wishing that the men would change the world for us, but instead create a world that works for women.

Timsit: Has that been difficult for you, getting financing for your campaign as the only woman running for the presidency?

Cooper: Oh, absolutely. Men have created a great club, and they support each other; when a guy steps up and says he wants to run, then all of his colleagues rally around him and give him financial strength and support. But women have not been entrusted with enough financial power, and so when a female rises up and says she wants to run, people question her and say, “If you expect financial support, don’t think it’s going to be us.” … I have been financially supporting my entire campaign.

Timsit: Did you receive the support of President Johnson Sirleaf as the only woman running to replace her? And do you feel like her legacy has impacted your political candidacy at all?

Cooper: From the first day I made my pronouncement that I was going to enter this race, a vast majority of young people, men, and maybe even some women said: “A woman again? Oh no, we’ve already given one woman a chance, we don’t think we want another woman here.” The second [response] was, “This woman [Johnson Sirleaf] really disappointed us, and we don’t want to trust another woman with the nation’s responsibility.” But at the international level, a lot of people respect Madame Sirleaf and so they said, “Well this is great, I’m sure Madame Sirleaf has been a great role model to you and encouraged you to step into the political arena.”

I’m grateful that she came in before me and established 12 years of peace for this nation, because it allowed me to come home. So, irrespective of what has been said and whether her legacy tarnished my potential, I think she was the only candidate during that 2005 election that could have done the job that she did so far, because when it comes to peace and negotiations, I think that women stand a better chance and are better negotiators. … She was the peace president; I’ll be the education and development president.

Timsit: Do you think this 12-year peace is here to stay, or could this election challenge it?

Cooper: The peace that Madame Sirleaf has sustained for the last 12 years has become extremely fragile and, depending on what direction we go to for this election, it could be tarnished, or we could build upon it. At the moment, 85 percent of the population is still underemployed; [people] are living on less than a dollar per day, they still don’t have opportunity, and children are uneducated and don’t have access to healthcare. There are still whole parts of the country that are isolated because of bad roads, so things become extremely expensive on the other side of the country. And so those things keep the peace fragile. Right now, if any crazy person comes in and offers something better, of course those 85 percent will run after anything they deem better.

This is why I’m pushing the fact that we need to feed the nation; we have to give affordable housing to the average citizen; we have to create jobs. … Liberia works for 15 percent—the privileged few—and we want to make Liberia work for a larger number of the country’s population.

“I am going to establish a country that will serve its young people the same way America served me.”
Timsit: Can you tell me about how your background and your experience as a refugee has shaped your political views?

Cooper: I really grew up in a state where politics was something you could not be a part of. I found myself in a country with a dictator; you could not speak about politics, you could not mention anything about your dissatisfaction or about anything your leaders were doing, otherwise your family would disappear.

By the 1990s we found ourselves in a major civil conflict, where we were running for our lives. My stepfather, who raised me, lost his life and my mother was out in the diaspora. We were in a war, and I ended up living around the world as a refugee and in parts of Africa, and eventually I migrated to the United States. On the first day that I arrived in Newark, New Jersey, I carried my possessions in one plastic bag—that’s all I had. I lived in one of the poorest neighborhoods, eventually worked my way through high school, got a full academic scholarship, was able to attend an American university, where I studied and did my best, and after university I was recruited by corporate America to go work in New York City.

Life changed overnight, and I give a lot of credit to the education system and the educational opportunity given to even the poorest person. I give America a lot of credit for its structure, which I’m sure a lot of Americans would say is not enough, but for someone like me, who was coming from a poor, war-torn country, it was like living the American Dream. … I saw how a society could be run and how an extremely poor person could rise to a certain status in society just based on their ability to perform. … And so I decided: when I come back to my own country, I am going to have to establish a country that will serve its young people the same way America served me.

What I saw in America, I tried to emulate in Liberia. I realized that, if I went into some form of leadership, I could influence policies to protect women and young girls, empower our youth, and help create jobs.

Timsit: You gave an interview to Voice of America recently in which you said that you were a “new breed of politician.” Can you explain what you meant by that?

Cooper: For too long, our politicians have been running for the sake of power. It’s all about “I’m the big shot, I’m the one who makes the decisions.” It was never about the people, and it was never about trying to create a society where the next generation will inherit a nation that they will be proud to call home. And so my generation, we’re not interested in just obtaining power or wealth for ourselves, we’re interested in building our nation, so that we can stay here and not keep running and trying to get visas to try to go to America or Europe or wherever.

Timsit: If you could tell Americans or Europeans one thing that they should understand about Liberia, what would that be?

Cooper: Liberia is a great, beautiful country. My fondest memories come from the rural areas where I grew up. Even in the midst of the crisis and chaos happening across the nation, it was still a beautiful country with lots of opportunities for investment. … When I say beauty, it’s not just the visual aesthetics. It could be a very peaceful country if we just balanced our act in government. Yes, I got great opportunities in America. But I love Liberia; Liberia has made me everything I am.