One of the World’s Most Dangerous PIaces For Aid Workers

UNITED NATIONS, Oct 19 2017 (IPS) – I will travel to the Central African Republic early next week to spend United Nations Day with a peacekeeping operation in order to pay tribute to peacekeepers across the world. 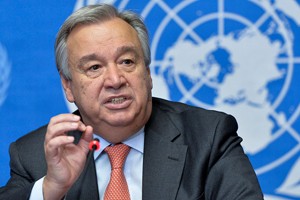 Peacekeeping operations are among the international community’s most effective tools for meeting the challenges of global peace and security. Peacekeepers show tremendous courage in volatile environments and great dedication in helping countries rise from the depths of armed conflict.

I thank the uniformed and civilian personnel for their contributions and the troop contributing countries for their commitment and generosity. This service too often claims the lives of those who serve. Since the beginning of the year, 67 peacekeepers have died in the line of duty. We honour their sacrifice.
In the Central African Republic, 12 peacekeepers have been killed from hostile acts this year alone. It is important to remember that five years ago, the Central African Republic was experiencing mass atrocities, and United Nations peacekeepers helped avert the worst.

Today, the situation remains very troubling. My visit also aims to draw attention to a fragile situation that is often far from the media spotlight. Across the country, communal tensions are growing. Violence is spreading. And the humanitarian situation is deteriorating.

Despite these rising needs, humanitarian personnel and aid workers are being targeted and access restricted. This year alone, 12 humanitarians have been killed in the Central African Republic, making it one of the world’s most dangerous places for aid workers to serve.

Meanwhile, our appeals for emergency aid are only 30 per cent funded. My upcoming visit will be an opportunity to engage with the Government and others in order to ease suffering, halt the current backsliding, and strengthen international support for peace.

I also aim to give impetus to the new United Nations approach to addressing and preventing sexual exploitation and abuse. We know that the good work and the tremendous sacrifice of peacekeepers around the world has been tarnished by the appalling acts of some UN personnel who have harmed the people they were meant to serve.

I am pained that some peacekeepers are alleged to have committed egregious acts of sexual exploitation and abuse against the people of the Central African Republic. During my visit, I will be accompanied by Jane Connors, who I appointed recently to serve as the Organization’s first Victims’ Rights Advocate. We are determined to ensure that the voices of victims are heard – I will myself be ready to meet with victims and their families – in and beyond the Central African Republic. Victims must be at the centre of our response if we want our zero-tolerance policy to be successful.

This is a critical moment for the Central African Republic. Much has been accomplished, including the election of a president and a government, following the inclusive Bangui Forum.

A special criminal court has been established with the help of the United Nations to ensure accountability, and in several aspects there has been progress towards recovery.

We need to do everything we can to preserve these achievements, support the UN peacekeeping operation and sustain peace. I have just asked the Security Council to increase the ceiling of troops in the Central African Republic and also to increase their capacity, their mobility and their ability to address the very dramatic challenges they face.

But there is no military solution to this crisis. We will continue to cooperate with the African Union and strongly support the African Initiative for Peace and Reconciliation, and I urge all partners to move this process forward, under the leadership of the Government of the Central African Republic, in line with the so-called Libreville Roadmap.

The country has seen enough brutality, enough division, enough conflict. It is time to consolidate the fragile gains and transform them into a sustained investment in peace and stability for the people of the Central African Republic.