In 2007, for the first time in history, United Nations forces operated an unmanned aerial vehicle — a small prototype for a short period by the UN mission in Haiti. In 2013, the UN officially launched drones (formally known as unmanned aerial systems, or UAS) for surveillance in a peacekeeping mission. 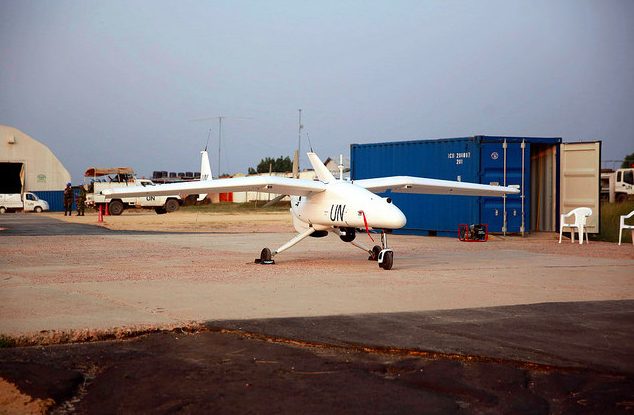 Despite the controversies around their use, especially concerning the uncertainty of how the data that are gathered are secured and used, drones became important to securing day and night real-time imagery to the peacekeepers deployed in the Democratic Republic of the Congo. The objective was to monitor some of the illegal armed groups in the eastern half of the country, along with protecting the civilian population better.

During a research trip to Goma in the region in 2015, I witnessed the use of drones by the UN mission there, called Monusco. Its UAS chief told me that as long as the five drones operating in the country provided situational awareness, they were considered an asset for the whole UN system, both in the field and in New York, at headquarters.

Adopting a similar line of thinking, the final report of the expert panel on technology and innovation in the UN peacekeeping department endorsed the drones’ use with full transparency, highlighting that they can bring advantages to a peacekeeping operation in safety, security, situational awareness and command and control.

In great part related to the controversies around the ethics and effects of using this technology, UN missions have only been operating unarmed drones, and so it will remain — representing a stark contrast with the fuzzy boundary between the use of armed and unarmed drones used by the United States military, especially in the “war on terror.”

Moreover, the UN has often adopted a cautious stance on the further development of unarmed drones and related technologies. For instance, in 2013, a Human Rights Council report called for a moratorium on the development and use of lethal autonomous robots.

While the use of armed drones for military purposes became popular in the 1990s, the use of unarmed ones for nonmilitary tasks is still emerging as an innovative tool for preventing conflicts. They have proven particularly useful in monitoring and surveillance, providing information for protecting civilians and preventing conflict breakouts. They can also be used for remote sensing, to extend wi-fi connectivity or to bypass areas with poor or no infrastructure.

Perhaps their main advantage in conflict-affected countries is the cost-effective provision of imagery from remote locations that otherwise would be extremely difficult to access.

One of the most promising examples of drone use in conflicts today involves real-time monitoring in Mali. The landlocked country, based in the Sahel region, has a plethora of different landscapes, from the Sahara in the north and the mountains in the northeast to the savannah in the south. This challenging and diverse terrain presents difficulties for humanitarian and development missions in the already turbulent country, which has been rocked by separatism and is subjected to sporadic, lethal attacks by extremist groups.

The United Nations Development Program is using drones — combined with satellite imagery — to enable real-time monitoring to support activities of humanitarian and development workers in the field, particularly those operating on community development for emergency services. The drone project is mapping the UN Development Program’s presence in Timbuktu and providing information about geography, adverse natural and anthropogenic hazards, besides providing updates on projects in the region.

Despite these abilities, the feasibility of using drones more widely for conflict prevention initiatives remains uncertain. For instance, in 2014, the UN Office for the Coordination of Humanitarian Affairs released a policy brief advising against their use. The agency’s main concerns focused on the association of unarmed drones with armed ones, causing fear and raising issues of privacy.

These caveats underscore the need to disseminate awareness of the advantages of unarmed drones in preventing armed conflicts, along with the differences in design and purpose of armed ones.

Nonetheless, surveillance with drones in peace operations remains a thorny issue, considering that it raises a wide gamut of legal and ethical questions. While addressing these concerns is necessary to ensure that such technologies are used in ethical, effective and legitimate ways, there is clearly a need to ponder how their use changes across different contexts.

For instance, what are the differences and similarities between the use of high-technological surveillance system in London and the use of government-authorized surveillance drones in Timbuktu?  How do these different contexts shape the legal and ethical dimensions of using drones to prevent violence, whether urban crime or armed conflict?

Rather than shelving the technology, international organizations should lead debates on the use of unarmed drones for conflict prevention, whether for monitoring a range of actions, from development projects in remote locations, shipments of illegal armaments and forced migrations to the threat of violence and genocide.

Think of past genocides: would the events have unfolded in the same way had drones been available and deployed? Alternatively, in current trouble spots: would protection of civilians in the Central African Republic or Somalia be enhanced through the use of drones? Collaboration with civil society entities, as well as the private sector — for instance, the drones in the Democratic Republic of the Congo were produced and are operated by an Italian company — will be essential in promoting regulation of drone and related emerging technologies.

In conflict-affected countries, there is no reason to crowd the skies with drones, but there is clearly a need to keep an eye in the sky when and where it is possible or even necessary to resort to drones. While no technology saves lives in and of itself, there is a growing need to explore the potential of new technologies for preventing violence in war zones.