Problems encircling the United Nations Human Rights Council are verging toward a major crisis. The same crisis had engulfed its predecessor, the Commission on Human Rights, leading the secretary-general at the time, Kofi Annan, to call to replace it with the Council. 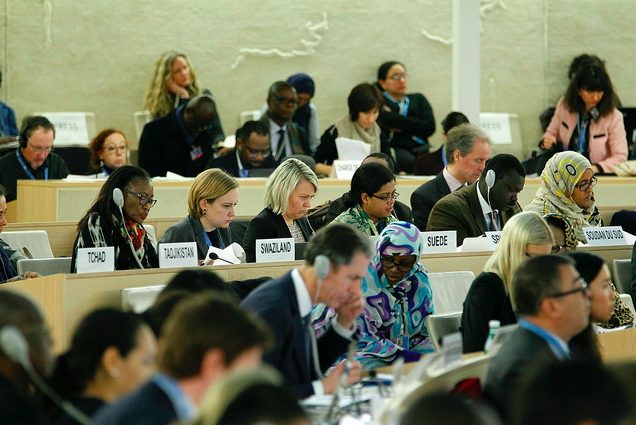 But the same problems affecting the former Commission now affect its successor, and the United States, which just announced it will exit Unesco, is openly signaling its intention to leave the 47-member Council unless it is reformed according to specific criteria, having convened a meeting with several delegations on Sept. 19 at the UN in New York to discuss the problem.

Leaving the Council would be catastrophic for the human-rights body. The troubles engulfing it can be remedied. And given that the General Assembly is casting its annual vote to elect 15 new members to the Council on Oct. 16, it’s important for the body to take action now as the US is ready to pounce.

There are four major problems hurting the Council: first, countries grossly violating human rights are still elected as members to the body; second, its agenda is considered biased by the US and other countries; third, the Universal Periodic Review is mainly a diplomatic exercise in which countries of doubtful virtue shower platitudes on their bedfellows; fourth, the special procedures system of fact-finders and analysts is breaking down under its own weight and lack of rigor in many instances. Each of these matters can be fixed.

First, the issue of membership: Afro-Asia is now allocated 26 of the 47 Council seats. It would be fairer to give the other three regions, Latin America, Eastern Europe and Western Europe, a corresponding number of seats. They should have among them 27 seats. How seats are distributed among the three regions can be negotiated. Adding two seats to each of the three regions would resolve the problem, totaling an overall membership of 53 states, the size of the UN’s Economic and Social Council.

The system of elections to the Council: Annan sought to remove bloc nominations, by which some regional groups decided among themselves on a slate of candidates corresponding to the number of vacancies.

Unfortunately, this process remains largely the case. For the Oct. 16 election, for example, the African group has four candidates, including the Democratic Republic of the Congo, to fill four open seats, virtually ensuring that Congo, which regularly sacrifices human rights for political gains, will win if it receives a majority of votes.

The way to end this pattern is to have the General Assembly, the parent body of the Council, decide that elections should be held as follows:

• Countries should apply to become members individually, setting out their qualifications.

• For each region, there must be at least 50 percent more applications than vacancies, allowing for real choice.

• Accredited nongovernmental organizations should be asked by the Secretariat to offer written observations on the human-rights records of candidates, with concise summaries circulated in the General Assembly before it votes on the candidates.

• Elections for the five UN regions should be done by the General Assembly only when these conditions are met.

The system would not be perfect. Britain, China, France, Russia and the US all have human-rights blemishes if not open wounds, some more than others. But they would have to compete for membership, like all other countries. And all candidates would continue to be subject to a two-term limit.

The second problem with the Council is the structure of its agenda: it holds three sessions a year with the same program, thus contributing to a lack of focus. The General Assembly could decide that the Council’s three regular sessions should be allocated as follows: the first devoted to civil and political rights; the second to economic, social and cultural rights; and the third to strengthening national protection systems, based on the reports under the Universal Periodic Review process.

The agenda for each session would have three items:

• Review of situations of international concern: report of the High Commissioner for Human Rights (all three sessions)

Restructuring the agenda would remove its selectivity and provide the Council more focus; in particular, it would help deal with the third problem affecting the Universal Period Review process, which is a lack of positive outcomes. The review has also lacked a focal point. This can be remedied by the Council deciding that, in plenary, it would concentrate its third session on discussing with each government how its national protection system might be strengthened. Human-rights protection must take place at home, inside countries. Focusing on improving the protection system of each country would give meaning and purpose to the review.

Finally, the special procedures system of fact-finders and analysts: some 50 mandate-holders now submit to the Council more than 5,000 pages of reports and recommendations every year, and neither the Council, governments, nongovernmental organizations nor the wider public can follow or digest their work.

It would be far more useful if each special procedure mandate submitted a four-to-five-page “highlight” of its main findings that would be gathered, translated and published in an annual report. The Council and the rest of the world could then follow the work of the mandates. The full reports could be published digitally in their original language, yielding enormous savings in documentation costs. More important, this method would clarify a system shrouded in mist.

General Assembly decisions on these four items of reform to the Human Rights Council can help avert a crisis for the world body.