Hundreds were hurt when police attacked voters as they tried to stop them casting ballots in a Catalonia independence referendum. 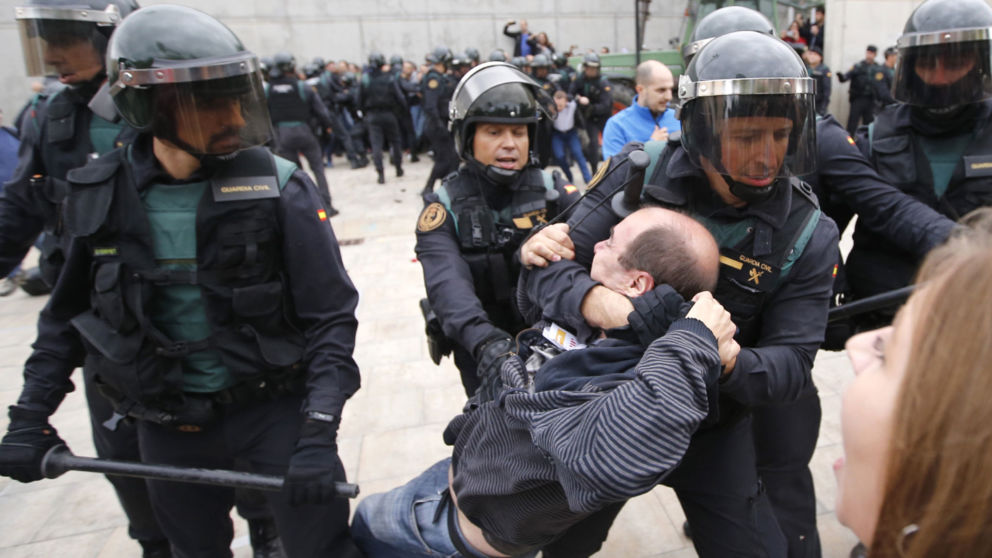 Top EU officials have urged Madrid’s government to avoid further “use of force” in the Catalonia crisis and to talk to separatists.

It comes after an illegal independence referendum where voters in the region overwhelmingly backed splitting from Spain.

More than 800 people were reportedly injured when riot police attacked voters with batons and rubber bullets as they tried to stop them casting ballots at polling stations.

The images on Sunday shocked Spain and led to heavy international criticism, including by the United Nations.

Spain’s interior minister Juan Ignacio Zoido said officers had simply tried to remove election material, but in some cases people had resisted them.

He also said thousands of police reinforcements sent to the region would be staying as long as needed despite Catalonia’s elected leader Carles Puigdemont wanting them to leave.

European Council President Donald Tusk said he had spoken to Spain’s Prime Minister Mariano Rajoy and had “appealed to find ways to avoid further escalation and use of force”.

The country’s government was holding emergency talks after Mr Puigdemont declared the region – which accounts for a fifth of the nation’s GDP – had “won the right to an independent state”.

The UN said it was “very disturbed” by the violence and said police responses must be “proportionate and necessary”.

Around 90% of those who took part in the referendum reportedly supported making Catalonia an independent republic.

Mr Puigdemont has said he would present the results to the region’s parliament, ruled by majority separatist politicians, which has the power to adopt a motion of independence.

However, the EU Commission said the poll was “not legal” under the country’s constitution and a Spanish court had banned it.

Some 42% of people had their say but many anti-separatists were thought to have stayed away and not voted.

The commission issued a balanced statement that voiced trust in the Spanish government’s ability to manage the “internal matter”.

But it also called for talks and reminded Madrid of a need to respect citizens’ basic rights.

The commission said: “We call on all relevant players to now move very swiftly from confrontation to dialogue. Violence can never be an instrument in politics.”

Mr Puigdemont has called for mediation by the EU to resolve the stand-off with Madrid, saying: “It is not a domestic matter. It’s obvious that we need mediation.”

He insisted the vote was valid and binding.

On Sunday, Mr Rajoy thanked police and said they had acted with “firmness and serenity” in clashes with voters.