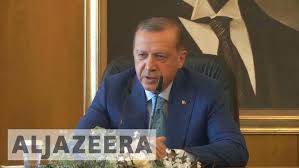 Only one fighting force in Syria is practically speaking taking on Daesh (ISIS, ISIL) on the ground, and that is the Syrian Democratic Forces, the bulk of whose fighters are leftist Kurds of the “People’s Protection Units” (YPG). They are joined by some rural Arab clans of Syria’s northeast, but I think the US Pentagon exaggerates the number of Arabs involved. The SDF is mostly Kurds, i.e. it is mostly YPG.

This weekend, the YPG fighters made another advance against Daesh, in the small town of Tabaqah due east of the Daesh capital, al-Raqqa. Tabaqah probably had a population of about 80,000 in 2011 when the Syrian civil war began.

The SDF announced that they had made enormous progress in Tabaqa, a strategic town that is key to controlling the biggest dam in Syria. The campaign there is called “Euphrates Fury,” which aims at liberating the town’s population from Daesh/ ISIL.