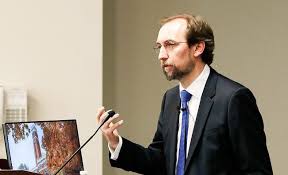 The U.N.’s top human rights official said Tuesday he is alarmed by what appears to be a “widespread pattern” of rallies in Burundi in which members of a pro-government youth militia chant a call to “impregnate” or kill opponents.

An online video emerged this month of an incident in a rural province involving the Imbonerakure militia. It showed members singing in the local Kirundi language: “Impregnate those opponents, so that they give birth to Imbonerakure.”

Burundi’s ruling party criticized the song. The party normally supports the Imbonerakure, despite accusations of rights violations perpetrated by its members.

“The grotesque rape chants by the young men of the Imbonerakure across several provinces in various parts of Burundi are deeply alarming — particularly because they confirm what we have been hearing from those who have fled Burundi about a campaign of fear and terror by this organized militia,” the high commissioner for human rights, Zeid Ra’ad al-Hussein, said in a statement.