Turkish Democracy in Trouble, but not Because of Presidential System 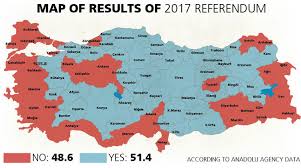 Turkey’s historic referendum on Sunday will move the country from a parliamentary to a presidential system. Many observers are sounding a death knell for Turkish democracy as a result, but the move to presidentialism in and of itself isn’t the problem.
Interestingly, Erdogan won with a similar demographic profile to that of the 2016 US presidential election. Erdogan’s constitutional change largely triumphed on the basis of rural and provincial voters but was rejected by the big cities. Turkey’s equivalent of the Red States drove the change.
Turkey is in essence moving from a British parliamentary system to a French presidential one.
In a parliamentary system, there is no strong separation of powers, since the prime minister represents the executive but he is elected by and functions within the legislature.
In a presidential system, the is a separation of powers and parliament is not so beholden to the executive.