The Last time there was this much CO2 in the air, Florida was under Water 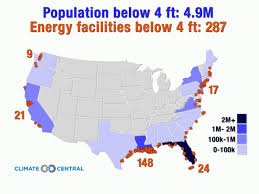 The Mauna Loa Observatory in Hawaii has reported that in April, for the first time in human history the level of carbon dioxide in the atmosphere has exceeded 410 parts per million (ppm). Carbon dioxide (CO2) is a powerful greenhouse gas that prevents the sun’s heat from radiating back out into space once it strikes the surface. It is because Venus’s atmosphere is mainly CO2 that the planet is a torrid hell-hole where metals melt on the surface.
New scientific estimates are that the last time there was this much carbon dioxide in the earth’s atmosphere may have been the Pliocene, some 4.5 million years ago. Some earlier estimates suggested that it had been 24 million years since we had this much CO2. In past eras, carbon dioxide levels tended to go up mainly because of volcanic eruptions. The CO2 gradually gets scrubbed back out of the atmosphere by going into the ocean or by binding with igneous rock, over hundreds of thousands or millions of years. In the meantime, more CO2 means more heat.
Although the Pliocene was cooler than the preceding era, the middle Pliocene was still substantially hotter than the earth is today.