Photo Essay: These Sculptures Tell the Story of the First Japanese Americans Sent to Camps

The memorial wall is 276 feet long—one foot for every Japanese person who lived on Bainbridge Island in 1942. 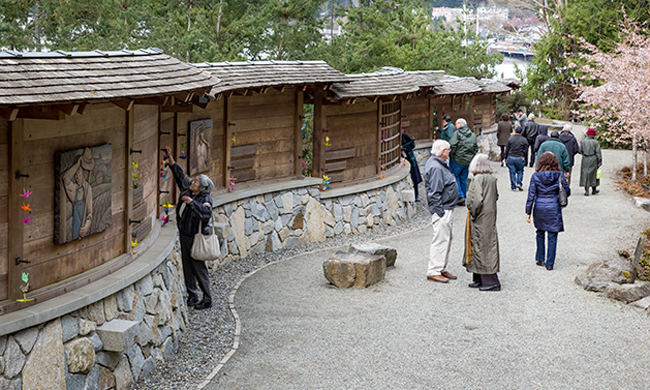 Seventy-five years ago, U.S. soldiers took 227 people with Japanese ancestry from their homes on Bainbridge Island, Washington, to Seattle and put them on trains headed for concentration camps. They were the first in the nation to be rounded up after Executive Order 9066. Eventually, 120,000 people were made to live for years behind barbed wire. In 1988 the U.S. government formally apologized, and reparations were paid. Every March 30, the community of Bainbridge gathers to heal. It built a memorial to those first victims, and it’s now a satellite of the National Parks Service Minidoka National Historic Site. It is a wall 276 feet long—one foot for every Japanese person who lived here in 1942. Along the memorial wall are six friezes by Seattle artist Steve Gardner, who believes the sculptures are particularly relevant today. Gardner remembers the Japanese community’s insistence that his works not merely tell a story: “Their hope was that it would resonate with people in a way that would make them treat others with love,” he said.