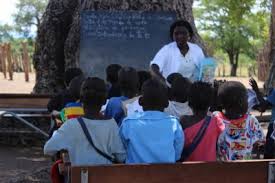 IBTimes UK visits a school in Tete, where teachers are using theatre to educate pupils on child marriage.

IBTimes UK visited a school in the Changara District, in Mozambique’s Tete province, where teachers are using theatre to educate pupils on topics such as child marriage. Although the Mozambican government has outlawed it, the phenomenon is still widespread across the country due to poverty, inability to access education and cultural practices.

In Mozambique, the legal age of marriage is 18, or 16 with parental consent. But the UN International Children’s Emergency Fund (UNICEF) estimated in 2016 that around one in two girls is married before her 18th birthday.

More than a quarter are married before the age of 15, with the phenomenon being more prevalent in the northern part of the country. Most of the girls have their first child within the first 15 months of the marriage.

Anabela Arnaldo, a first grade teacher at the school in Chengara, believes that theatre is a powerful tool that can help tackle child marriage.

“The aim of the play is to teach that we should not accept the fact that children get married at an early age. Children have to study, only when they grow up and find a job, they can look for a partner,” she told IBTimes UK.