Is Trump Taking Us to War Everywhere? 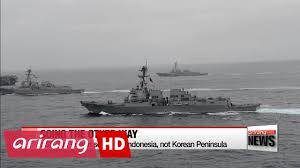 No one expected Trump to be a peace president, but he seems bent on taking us to the verge of World War III.
No one ever expected Donald Trump to be a peace-loving president. On the campaign trail, he endorsed torture, said he’d bomb the families of alleged terrorists, and spoke gleefully about the president’s power to launch nuclear weapons.
But threatening war with multiple countries over a few weeks goes beyond even that. Tough-guy, hit-them-before-they-hit-us foreign policy is back with a vengeance.
Under Trump’s orders, earlier in April the military dropped the largest non-nuclear bomb in its arsenal — known as MOAB, or the “Mother of All Bombs” — on Afghanistan. Outside of Hiroshima and Nagasaki, there’s simply no precedent for the use of such a large weapon, which carries grave risks of civilian casualties.Shortly before that, Trump ordered a military strike on Syria, apparently without informing either Congress or the State Department. Meanwhile, the White House is rattling its saber at North Korea and pondering an expanded military role in both Somalia and Yemen.
In all of these situations, Congress has not only the right but the responsibility to carefully review any authorization of military strikes. Yet so far this president, like others before him, has taken pains to keep the people’s representatives completely out of the loop about his plans for the wars we’re already fighting, as well as for any new ones he might start.