By Manveena Suri, CNN,
17 March 2017. New
Delhi (CNN) Over a million Muslims from across India, the majority of them
women, have signed a petition to end the controversial divorce practice of
triple talaq. Triple talaq is an
Islamic practice where a man can divorce his wife by saying
“talaq,” the Arabic word for divorce, three times. 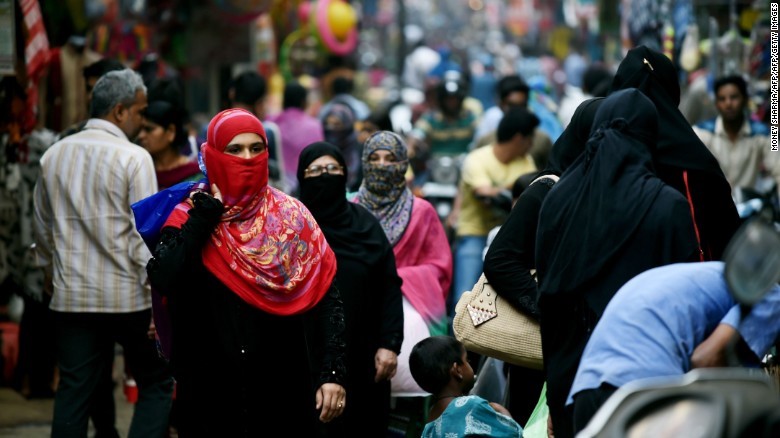 India is home to the world’s second-largest
Muslim population.
India is one of few countries with large
Muslim populations not to have banned triple talaq.
The petition was started by the Muslim
Rashtriya Manch (MRM), an Islamic organization affiliated with the right wing
Hindu group Rashtriya Swayamsevak Sangh (RSS). The RSS is linked to Indian
Prime Minister Narendra Modi’s ruling Bharatiya Janata Party (BJP).
“For a long time when we were not
in the government, the BJP had, and still has, the ideology that gender
equality is a must, irrespective of religion or caste,” BJP official
Sidharth Amarnath Singh told CNN.
The positive response to the petition
has been linked with BJP’s recent success
in state elections in northern Uttar Pradesh.
“The fact that the BJP was able to get
Muslim votes in Uttar Pradesh … suggest that the party and the central
government need to heed the voice of the Muslim women,” MRM national
coordinator Mohammad Afzal told magazine India Today.
Last week, Modi’s party won in a
landslide, taking 312 seats out of a total of 403, the biggest majority for any
party in Uttar Pradesh since 1980.
According to the most recent census,
Muslims make up 18.5% of Uttar Pradesh’s 200 million-strong population, the
largest state in India.
Elected as a lawmaker for Allahabad
West, a constituency where 90,000 of the total 400,000 voters are Muslim, Singh
noted that although Muslim women may have supported the BJP, it didn’t
necessarily bring the party more votes.
“The women didn’t come out, and I
was told subsequently, that the reason they didn’t was because they believed in
stopping triple talaq,” he said. “Generally it’s been that they vote
against the BJP so if you don’t vote for anybody, it’s a plus for us.”
India is home to one of the largest Muslim populations in the world, but unlike most Muslim-majority countries, it has not
banned the practice of triple talaq. In Pakistan and Indonesia, the practice
has been outlawed for years.
According to the Quran, a man must
consider his decision for a period of three months after he initially declared
talaq. A divorce is only granted after the remaining two “talaqs” are
stated.
The three-month period should allow for
introspection and counseling between the couple and their families. The
reality, however, is that a woman can be forced out of her home with little
notice. Increasingly, it’s even being delivered by phone, email or text.
In recent years, the movement against
triple talaq has picked up, and India’s Supreme Court is due to begin ruling on
its constitutionality later this month.
India Prime Minister Modi has also
spoken out against the practice, saying India cannot allow the lives of Muslim
women to be ruined by three words said on the phone.