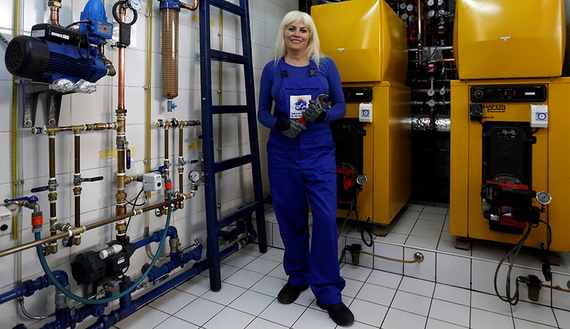 Khawla al-Sheikh, a plumber and a certified trainer, poses in the basement of her home, where she gives training courses in plumbing to other women, in Amman, Jordan, Feb. 23, 2017. (photo by REUTERS/Muhammad Hamed)

AMMAN, Jordan — A number of Jordanian and Syrian women are defying social norms by working outside the home. On top of that, a few of them have ventured into a profession that has long been the sole preserve of men — plumbing.

In the city of Irbid, 62 miles north of Amman, five path-breaking Jordanian and Syrian women wear the blue uniform of the trade, having established the first female plumbing company in 2016. The Syrians found their way to plumbing in an effort to provide for their families, who fled to Jordan during the civil war raging in their home country since 2011. The conflict, unsurprisingly, has dealt a blow to their savings. Meanwhile, bad economic conditions, unemployment and poverty drove the Jordanian women to the trade.

Safa Sukariya, fleeing war in Syria, settled in 2013 in Irbid, leaving behind a Damascus accessories shop, her only source of income. Without a job or other income, Sukariya began looking for work that could provide for her and her three kids.

Sukariya told Al-Monitor that she began plumbing two months after attending a grant-based training course in 2015 sponsored by the German Center for International Cooperation in partnership with the Hakama Vocational Training Institute. “Society did not initially accept the idea, but over time people began to tolerate the existence of a workshop for women who live alone, especially Syrians who have lost their husbands in the war,” Sukariya said.