An Onslaught of Islamist Violence Is Europe’s New Normal

Last Thursday, in an attack that has started to feel routine, Karim Cheurfi opened fire on French police on the Champs-Élysées in Paris, killing a police officer. Cheurfi then wounded two others before he was shot and killed. Police later found a note in which he expressed support for the Islamic State, which later declared him their “soldier.” 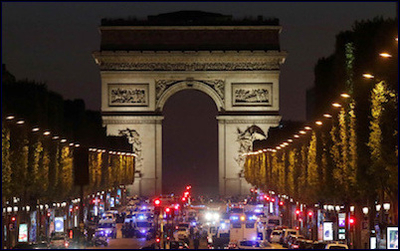 Police secure the Champs Elysées after the April 20 shooting.

Following similar attacks in London, Stockholm, Paris, Nice, Berlin and Israel, Europe is waking up to the fact that these abrupt acts of murder — using knives, guns and cars — are the new norm.

Over the last five years, there has been a noticeable change in jihadist methods. During the 2000s, Al Qaeda and other violent Islamist groups were preoccupied with large explosions –terrorist acts that took months of planning, networks of contacts, sources of funding, and supplies of explosive material. The effects, when successful, produced enormous casualties and made for dramatic television. But these plots were also ripe for discovery by law enforcement: large money transfers were noticed, explosive materials were tracked, conspirators were surveilled and Muslim informants exposed whole Islamist cells.