You can be safe from the Israel Lobby, but only on the moon!

by Evelyn Hecht-Galinski, Sicht vom Hochblauen, 15 March 2017. How long
can the “special” relationship to the “Jewish State” be allowed to lead to the
discrimination and marginalisation of Israel’s critics and pro-Palestinian
activists in Germany? 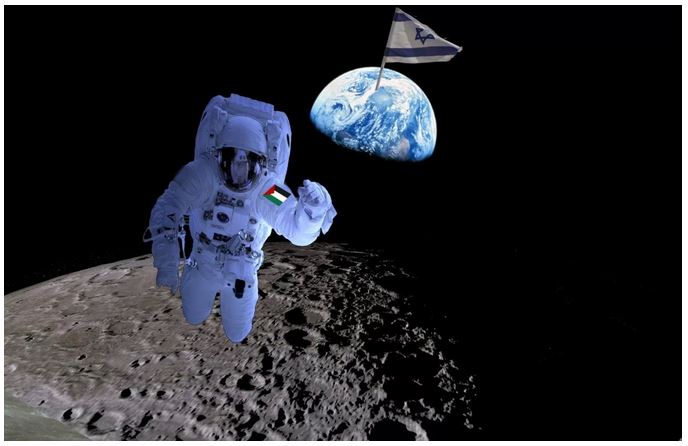 Instead
of celebrating government consultations with a Jewish regime of occupiers,
Germany should put pressure on the “Jewish State” and threaten it with sanctions.
When it was about Russia, Merkel was in the frontline!
Does all
this correspond to “our” values and to the values of our constitution? How can
Mum Merkel prescribe the German reason of state for the security of the “Jewish
State,” a state committing genocide during the last attack against Gaza about
which there will not be any Parliamentary Session. Merkel even called the
Israeli Prime Minister Netanyahu and expressed her solidarity with him and the
“security” of his country. A questionable security the Western nations, led by
the USA and Germany, will finance
with
massive military expenditures and tax gifts permitting the illegal occupation
and the attacks.
Israel is
a highly-armed nuclear power and is a danger for world peace. It is only
waiting to attack Lebanon or Iran. Günter Grass, one of the few serious
intellectuals, said this, and was damned and defamed. I can personally confirm
how deeply the Nobel laureate for literature and the sincere SPD politicians
were struck by this defamation campaign.
Up to now
I have been missing the partisanship of the elite, the intellectuals, the
officeholders, and the  “sincere ones of
the socialist party,” when it is about the freedom for Palestine. They all
remain cowardly silent when it is about the decades-long and well-documented
crimes against the international law and human rights committed in the “Jewish
State.” They simply fear to be labelled as anti-Semites.
This
hypocrisy affects me a lot. If we look at the numerous wars and interventions
we have been involved in up to now, including the Nobel prize for peace winner,
the EU, and former US president Obama, we see how our “democratic values” have
become a ridiculous parody. And the newly-elected US president Trump supports do
the “Jewish State” in its rapacious settlement policies.
Because
of its alleged “special” relationship, Germany and its government is obliged to
convince its friends of the Jewish state to recognize international law and UN
resolutions, and to guarantee to the Palestinians their inalienable right for
self-determination, which should be a democratic self-evident fact for a German
State, which in Article 1 of its constitution says that human dignity applies
to all (Palestinians included) and is indivisible. This should apply also to a
“Jewish State” being the alleged only democracy in the Middle East. However,
until now, this has not occurred for decades.
The
freedom of speech and teaching must apply also to the critics of the Israeli
policies and must be defenced. This is what I expect from the German elite, who
cowardly retreat  in silence when it is
about Israel. Where is the solidarity with the universities where the Israel
lobby deeply interferes with the freedom of teaching?
Do we also
want that here in Germany teachers engaging for a free Palestine have to emigrate,
as many Israeli intellectuals do? Let us think about Ilan Pappe, teaching in
exile in Exeter today. Also he should not have a ban on speaking in Germany as a
descendant of Holocaust survivors only because of the pressure by the Israel
lobby.
We should
oppose together to the title of my book “Das
elfte Gebot:Israel darf alles” (English translation of the title: The 11th Commandment:
Israel is allowed to do all).
And to
the question of FAZ on the occasion of a controversy at the court with the Jewish
Spiegel-Welt journalist and islamophobe porno writer H.M. Broder “What is a
Jewish woman in Germany allowed to say against Israel?” I would like to answer:
“All, of course, and in particular the truth!” More or less polemically, but
straight from the heart! And I do not want to avoid doing that!
Or must
we go to the moon to be safe from the Israel lobby?