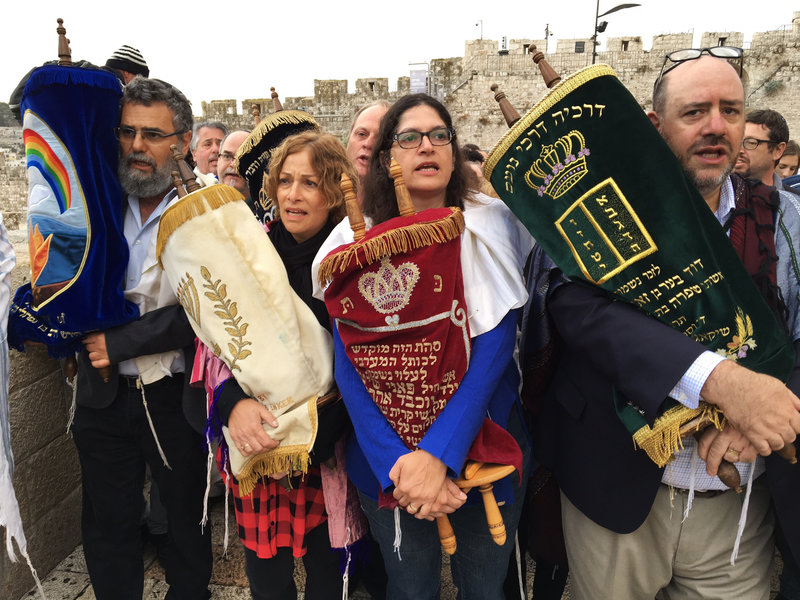 Members of Women of the Wall, which lobbies for women to be allowed to sing and pray aloud at the Western Wall, march through the Jewish quarter of Jerusalem’s Old City. The group organizes monthly marches and are often heckled by ultra-Orthodox men.
Lauren Frayer/NPR
Jewish women sing songs of worship as they march arm in arm with male supporters through an ultra-Orthodox area of Jerusalem’s Old City.

They’re from a group called Women of the Wall, which lobbies for women to be allowed to pray, sing and read the Bible aloud at the Western Wall, the most important site for Jewish prayer. They hold these marches about once a month, and they often get heckled. Today is no different.

Ultra-Orthodox men sneer and beseech the women to go silent. Young boys from a nearby Jewish seminary, or yeshiva, taunt the women and blow high-pitched whistles to try to drown out the female voices.

Some ultra-Orthodox object to women singing in public — a subject of theological debate here. In Israel, it’s rare to hear a woman even speaking on ultra-Orthodox radio.

Four years ago, a lawsuit was filed by an Orthodox feminist group called Kolech, which means “Your Voice” in the Hebrew feminine. It was one of the biggest class-action lawsuits in Israeli history, and it targeted what was then an all-male, ultra-Orthodox radio station called Kol Barama, founded in 2009.

“There were no women interviewing. You wouldn’t be able to hear a woman on this radio channel,” says Kolech’s executive director, Yael Rockman. “Not only that. This radio channel is not private. They get money from the government. “