Water Is Life: The Story of Standing Rock Won’t Go Away

The Dakota Access pipeline is set and oil will flow. But this is not the only fight about water, and Standing Rock is only one chapter somewhere in the middle of a long story. 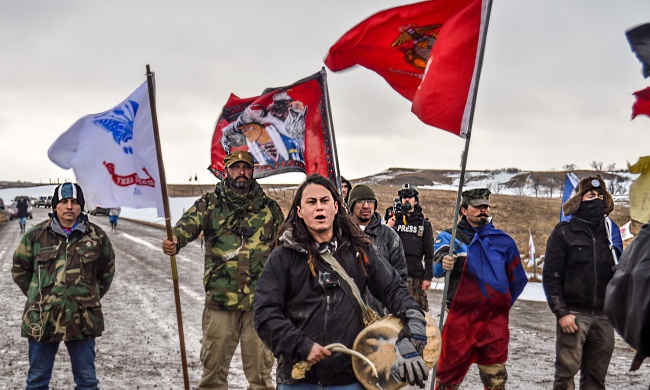 Every day I write rhymes on Twitter. I get a kick out of reducing complicated ideas and events down to 140 characters. So yesterday I wrote:

And that is the story I want to tell. Standing Rock is only one chapter somewhere in the middle of a long story.

It’s true that North Dakota used the power of the state this week to march into the camps along the Missouri River and round up the remaining water protectors. But think about that story: A few dozen people were arrested at camps where more than 10,000 people once said no to the Dakota Access pipeline. That people power did not evaporate. Even today more people, tens of thousands, perhaps millions, are still a part of that effort via social media and through direct action.

The Standing Rock Sioux tribe and its allies have been repeating the same story for more than a year: Mni wiconi (water is life). This is a narrative that the state of North Dakota, the pipeline company, and the oil industry could not counter, despite spending millions of dollars and advancing into Great Sioux treaty lands with a law enforcement army.

The chief executive of the company behind the Dakota Access pipeline told investors on Thursday that he “underestimated the power of social media,” where stories spread so rapidly. According to Bloomberg News, Kelcy Warren complained: “There was no way we can defend ourselves.” (Actually, there was a way: Many energy companies have figured out that it’s far better to work with communities than to roll over them.)