Trump fires his first bullet against the Middle East 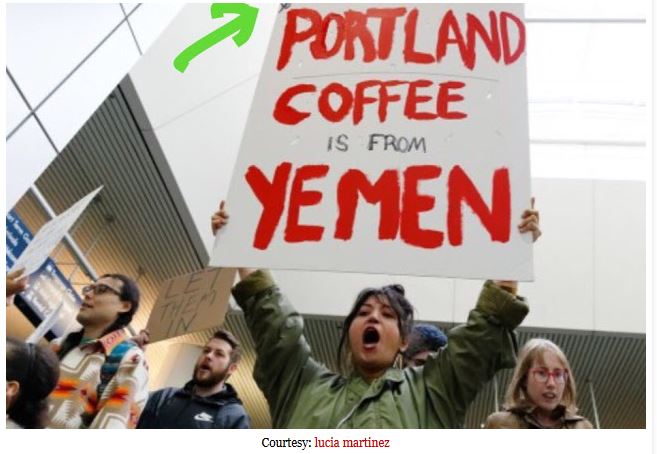 *As a Yemeni, I was terrified when Donald Trump won the presidency. I
couldn’t express exactly what I was terrified of, or how he would have
policies that would have an extremely damaging impact towards Yemen. But
my instinct made me fear of a coming nightmare. I’ve had the anguish of
imagining Yemen, one of the poorest countries in the world, versus the
US, a superpower on earth.

Not long enough, last week, Yemen, along with six other
Muslim-majority countries took the first bullet of Trump’s
administration’s extreme nationalist and racist foreign policy in the
Middle East.

Ironically, on the 27th of January, the same day of the Holocaust Memorial Day, Trump signed an Executive Order
that imposes a selective ban on people from Yemen and nationals from
other six countries from entering the borders of the US. The immediate
reaction by US-related Yemenis was disbelief, while Yemenis inside Yemen
did not care much, “as if this matters to us, we who have been living
under naval and air blockade under the war,” as one friend in Sana’a
told me.

Overall reaction was understanding that this is another
phase of deepening the longstanding animosity and anti-American
sentiments that Yemenis have for the US administration, not only in
light of the US 15-year-old
drone strikes campaign in Yemen that slaughtered more noncombatants
civilians than combatants, but also in light of the US involvement in
the ongoing conflict in the country in its support for the Saudi-led
coalition airstrikes campaign. No clear condemnation statement from
Yemen’s exiled president in Saudi Arabia, Abdu-Rabu Mansour Hadi, has
been made yet, while former ousted Yemeni president, Ali Abdullah Saleh
and Houthis’ authority in Yemen has condemend the ban.

Condemnation
is not enough at this point. The least that can be said about this
disgraceful order is that it is discriminatory. As a Yemeni, I’m
enraged. I think of the largest Yemeni diaspora community, which is
residing in the United States. I think of my Yemeni friends who recently
have taken the risky and costly road to seek refuge in the US,
following the war in Yemen. I think of the American-Yemenis’ tears and
pain, as they are stuck in airports around the world, asked to be
deported to war-torn and starving Yemen. I think of their fate and what
worse reality the future holds for us.

The day after the ban was
under effect, American commandos conducted a raid into Baidha province,
in south Yemen, killing one local al-Qaida leader but also around 30
civilians mostly women and children. Among those shot dead was eight
year old Nawar al-Awlaqi, the daughter of the jihadist cleric, the
Yemeni-American Anwar al-Awlaqi, who was killed in 2011 by an American
drone strike. Nawar’s brother, 15-years old, Abdulrahman al-Awlaqi, was
also killed by a US drone strike weeks after his father.

Both
former president Obama’s and president Trump’s administrations have
always showed eagerness in conducting their operations in their war
against terror in Yemen, but the aggression and hatred has never been as
consistent as is the case under Trump’s rule. Trump’s policies show
that Yemenis’ lives don’t matter and will not matter to the current US
administration.

The administration sends a clear message that
it’s legitimate to rip Yemenis from their right to free mobility, while
mercilessly bombing them in their homes. Giving this inhuman situation,
we should all worry about the backlash.