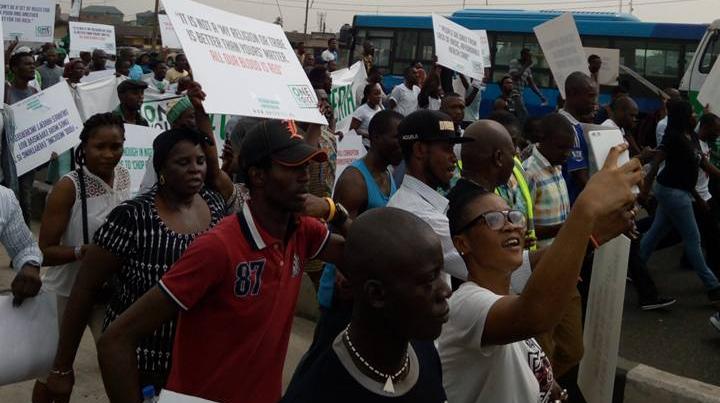 Amid heavy police presence, Nigerians took to the streets on Monday in peaceful protest against the Muhammadu Buhari administration. The planned protests, which took place in the capital Abuja and in Lagos, were attended by thousands of citizens. Smaller groups of protesters also marched in various cities across the country.

In 2015, Buhari won the Nigerian presidential election with a campaign that promised to right the wrongs of the previous administration. The Goodluck Jonathan administration had been rife with looting of public funds, a lack of accountability and a rise in the activities of Boko Haram terrorism.

Less than two years later, a lot of Nigerians are regretting their decision. Fuel subsidy has been removed, the cost of living has more than doubled, unemployment is on the increase, and in 2016 the country officially went into recession.

Business owners and individuals are groaning under the weight of a forex situation that has seen the naira exchanging at N500:$1 in the open market. The government has also implemented a number of economic policies which have done little to alleviate the situation.

Walking from the National Stadium in Surulere, Lagos to the National Theatre in Iganmu, protesters held placards with inscriptions like: ‘Unemployed people are hungry and angry’; ‘Food, medicine, everything is 3 times more expensive yet salaries haven’t increased’; ‘Religion, ethnicity or what part of the country I live should not determine the sort of protection I get from my government’; ‘People die daily from lack of basic affordable healthcare’; among others.

“The Nigerian system, the bourgeois and those who have held power have now told us that democracy is the government of the rich by the rich to make laws for the poor to suffer. The motive for this march is to show that the power in the people is more than the people who are in power,” one of the protesters said.

Notably missing from the protest was top musician Tuface Idibia, who had been the face of the #IStandWithNigeria protest. The icon had put out a video late on Saturday withdrawing his support for the protest because ‘no protest was worth Nigerian lives’ even as unconfirmed reports of his detention by the Department of State Services (DSS) went viral. Idibia has however dispelled the reports, saying in a tweet that he was ‘fine and free’.