CoreCivic — formerly the Corrections Corporation of America — has said it is able to provide the extra detention facilities needed to enforce Trump’s executive orders on immigration. 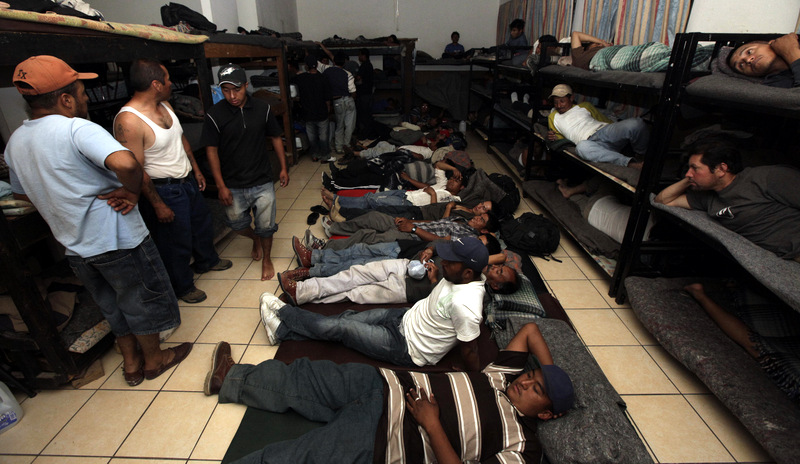 A group of men deported from Arizona prepare to sleep at an overcrowded detention facility for migrants at the border in Nogales, Mexico. (AP /Gregory Bull)

(Report) — U.S. President Donald Trump has begun to follow through on his promise to crack down on immigration and roll out harsh border securitization, and while undocumented immigrants will face the suffer the gravest repercussions, private prisons, on the other hand, stand to be the biggest beneficiaries.

In just two weeks since Trump signed an executive order calling for the expansion of immigrant detention facilities at or near the border with Mexico, stocks for private prison companies have surged.

While the Obama administration implemented the most heavy-handed measures against immigrants compared to any other president — actions that earned him the monicker “deporter-in-chief” — Trump is expected to substantially ramp-up the mass immigrant detention system Obama put in place.

Prisons are already filled to the brim with immigrant detainees, and critics warn that Trump’s anti-immigrant policies and mass apprehensions are likely to exacerbate the squalid conditions.

Carl Takei, a staff attorney at the American Civil Liberties Union’s National Prison Project, told the LA Times that there is likely to be “an enormous boondoggle for the private prison industry.”

“The immigration system already lacks rigorous oversight and transparency,” he explained. “And now there’s this perfect storm — a push to rapidly expand the system, a lack of existing oversight and the profit motive driving these companies.”

Private prison companies already provide a much lower cost to keep inmates, compared to federally run Immigration and Customs Enforcement facilities. That profit motive is at the expense of decent conditions in these centers.