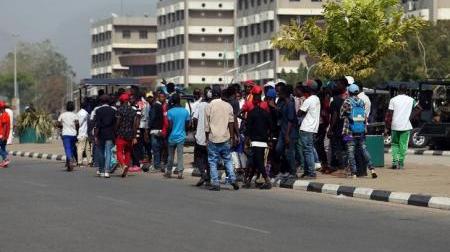 Nigerian protesters on Thursday demanded that South African citizens and businesses leave the country and vandalised the head office of mobile phone giant MTN in Abuja in retaliation for anti-Nigerian violence in South Africa.

The National Association of Nigeria Students (Nans) said it had given South Africans 48 hours to get out otherwise the attacks would continue and the vandalisation of MTN’s offices would be just the beginning.

Nigeria and South Africa, the continent’s two largest economies and pre-eminent diplomatic and military powers, have a volatile relationship.

The students’ threats follow the looting this week of at least 20 small businesses believed to belong to immigrants in South Africa’s capital, Pretoria.

“We are not going to kill like them and that is why we have asked their citizens to leave, but we will sure destroy their businesses,” said Nans president Aruna Kadiri.

Nobody was killed in the violence in Pretoria, according to South African police.

South African foreign ministry spokesman Clayson Monyela called for both sides to keep their cool. “‘An eye for an eye makes the world blind’ … ‘Violence begets violence’. We are better than this. Africans are one people!” Monyela said on Twitter.

A spokesman for MTN, the biggest South African company active in Nigeria, said protesters stormed the regional head office, vandalising equipment, attacking customers and stealing some of their phones. No obvious damage could be seen from the outside of the building, which had been cordoned off.