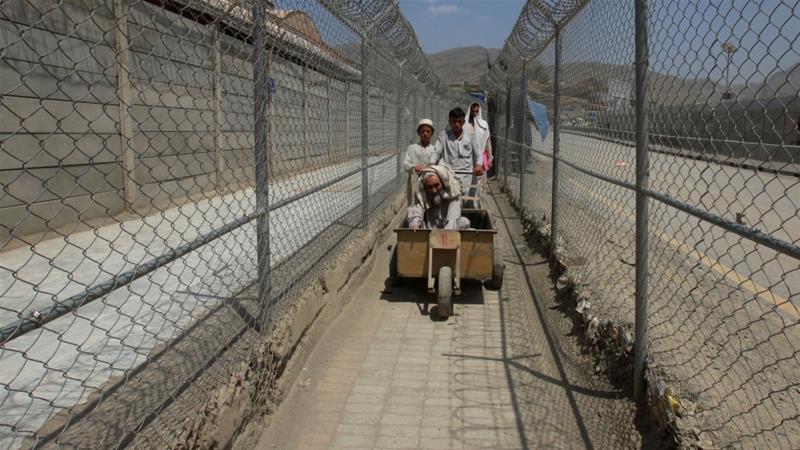 Torkham, Pakistan – Torkham is a maze of chain-link fences and razor wire. Stern-faced Pakistani guards, their rifles loaded and at the ready, watch on as Afghan visitors quietly circumnavigate the multiple checks of their papers at the main border crossing between the two South Asian countries.
Nearby, a group of about two dozen children watch on, as they await an uncertain future and possible deportation under a newly instituted regime of strict Pakistani rules governing the entry of Afghan nationals across this border.
It was not always like this. For decades, the Pakistan-Afghan border was virtually open, with tens of thousands crossing in each direction each day to visit relatives or seek work without requiring passport or visa.
Since 1979, millions of Afghans have used this border crossing to seek refuge from war and violence in their country. They fled the Soviet invasion in 1979, then the Taliban’s excesses in the 1990s, and, finally, the 2001 US-led invasion of their country in 2001, and the chaos that followed.
Today, there are 1.32 million registered Afghan refugees still in Pakistan, along with an estimated more than a million undocumented others.
Things changed for the worse, however, in June last year, when a clash between the Pakistani and Afghan militaries at Torkham border left at least four Pakistani and Afghan soldiers dead and several others wounded.
The relationship between the two countries soured in the wake of the deadly clashes. Pakistan has tightened border restrictions and, rights groups and refugees allege, begun cracking down on refugees, forcing them to return home.