A tale of two evacuated villages

by Avi Issacharoff, Times of Israel, 5 February 2017. Watching the Amona evacuation, with its unarmed police and efforts to reach a deal with settlers, residents of the Bedouin village of Umm al-Hiran ask why such consideration wasn’t afforded them as well 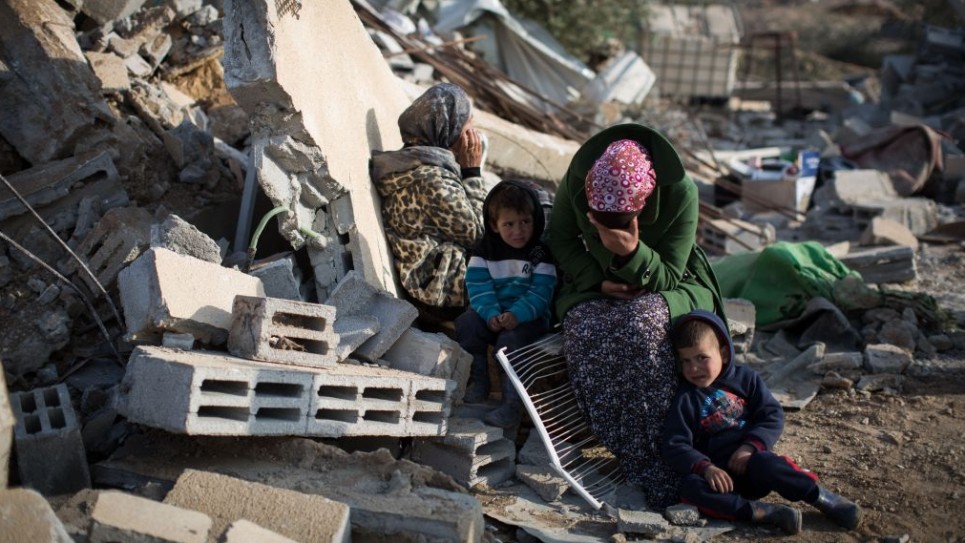 In Umm al-Hiran, or what’s left of it, the images of Israeli police clearing out the West Bank outpost of Amona on Wednesday elicited more anger than empathy.

“Look how gently they’re being treated,” said Salim Abu al-Qia’an, a resident of the northern Negev village slated to be evacuated as well. “If only they had come to us like that. They made us into enemies.”
On paper, Amona and Umm al-Hiran have a lot in common. Both of them were evacuated — partially for now, in the case of Umm al-Hiran — in large police operations after legal efforts were exhausted. But what separates them was more striking for many than what they share.
While the evacuation of Umm al-Hiran last month was marked by a confrontation that turned deadly, as well as violent clashes, claims of excessive police violence and homes razed with everything still inside, in Amona, emotions ran high but violence remained at a relative low, with police, most of them unarmed, escorting out residents and protesters.
Describing the evacuation, Abu al-Qia’an says it started when hundreds of armed police officers entered the village and raided each home. Snipers stationed themselves on the roofs, while high-ranking members of the Israel Police used megaphones to warn police officers to be alert, since weapons might be present.
Somebody forgot to mention that many of Umm al-Hiran’s inhabitants serve in the Israeli army. Some of them, whose homes were slated for demolition, were career officers in combat units.

A resident of the Amona outpost shouts at police officers through a megaphone during the evacuation of the illegal settlement on February 1, 2017. (Hadas Parush/Flash90)
A short while later, early in the morning, Yaqoub Mousa Abu Al-Qia’an, a relative of Salim’s, left his home, which was slated for demolition, and began driving away.
It is still unclear whether Abu al-Qia’an had planned a ramming attack or whether he sped up out of panic or had been wounded by gunshots fired at him as he drove. Accidentally or not, his car fatally struck police officer Erez Levi and wounded another officer, whereupon police shot and killed Abu Qia’an.
The grounds for drawing a comparison with the West Bank hilltop are strong, residents feel. Why was no serious attempt made to reach an agreement with the residents of Umm al-Hiran, as was done in Amona, they ask? While several proposals for compromise and resettlement were made, the residents have convincing explanations of why they were in no hurry to accept them.
Just a few hours before the incident, police officers held talks with the residents about the possibility of re-establishing Umm al-Hiran in another location. Why was it necessary to send in hundreds of armed police officers amped up for a fight, while the measures taken in Amona were so much gentler?
We can imagine what would have happened if dozens of police officers had been wounded by violent protesters by the Bedouin in Umm al-Hiran, as happened in Amona. It is likely the incident would not have ended only in only a few arrests.
If one were to argue that the settlers of Amona were more loyal to the state, they need only look at those living in Umm al-Hiran and Atir, another Bedouin village on the chopping block, to discover some of them serve in the Israeli army and many of them vote for Zionist parties.

Yaqoub Mousa Abu al-Qia’an (Courtesy)
“All the people who lived here and in Atir voted for Zionist parties until eight years ago,” said Thabet Abu Rass of the Abraham Fund, which supports Jewish Bedouin coexistence. “Things have changed since then. Maybe the state ought to look into what happened and how it changed. Everybody here belonged to Ariel Sharon’s [short-lived] Shlomzion party. But today they are ashamed of it. It’s an embarrassment for them. That is why we did not see Arabs from the north coming here in droves to show solidarity. As far as they are concerned, these people served the country, so they can pay the price.”
Abu Rass was part of the negotiating team that held talks about the future of the people living in these villages. He said residents suggested they become part of the religious Zionist community slated to be built on the land but were refused.

Israeli policemen detain a Bedouin man during a protest against home demolitions on January 18, 2017, in the unrecognized Bedouin village of Umm al-Hiran in the Negev desert. (AFP Photo/Ahmad Gharabli)
The inhabitants of Umm al-Hiran, unlike those of Amona, did not settle on privately owned land but rather land belonging to the fledgling state in 1955. Salim Abu Abu al-Qia’an said residents agreed to move to Hura, as the government wanted, but hit an impasse when residents said they wanted to be hooked up to the power grid first.
“They said no. They wanted us to move now. I have lost faith in the state and in the police. No more. As far as I am concerned, it’s over,” he said.
While some homes in Umm al-Hiran were razed, several more remain standing, though the state has said it will tear them down, too.

Police officer 1st Sgt. Erez Levi, 34, who was killed in an alleged car-ramming attack at Umm al-Hiran, January 18, 2017. (Courtesy)
Maryam Abu al-Qia’an, whose husband served in the Givati infantry brigade, says she still thinks she’ll be allowed to stay in her home at the top of a hill.
“I want to see my daughters grow up here. I intend to stay here even if they tear down my home. There is a housing shortage in Hura. It is a city, and I don’t want to live in a city. Also, there is a lot of tension between the various families,” says Maryam, who is completing her studies for a masters degree in public administration and raising four daughters.
“Look around you,” she says, pointing to the wide-open vistas that mark the Negev desert’s scrubby landscape. “Is land in short supply here, that they want to establish the Jewish residential community here, of all places? We said: Let us be part of the Jewish town. But they said no. True, there are people here who serve in the army, but I don’t agree with that. Why not? Are they going to send us to fight for a country that treats us like second-class citizens? Like an enemy? They came into this village with troops that they don’t even send into the Gaza Strip. And I tell you: If they come to destroy my home, let them tear it down on top of me.”
At the bottom of the hill are two new shipping containers that have been made into housing units. They have been served eviction orders as well. In place of the homes that belonged to Yaqoub Abu Al-Qia’an and his wives and 12 children, there are only ruins and an improvised shelter decorated with images of the participants in the television program “Goalstar.”
“Where are our human rights, and those of Yaqoub’s children? They have to live here in the cold, like animals,” Maryam says. “But we do not want conflict. We do not think about extreme things anymore. We hope that they will let us live here in peace. What will go through the minds of Yaqoub’s children? I don’t know. You tell me.”