January 5, 2017February 23, 2021 by admin
by Brian Sonenstein, Mintpress News
January 3, 2017
A recent DOJ audit found that a Mississippi private prison which holds mostly immigrant prisoners, failed to address issues with staffing and living conditions that led to a deadly riot in 2012. 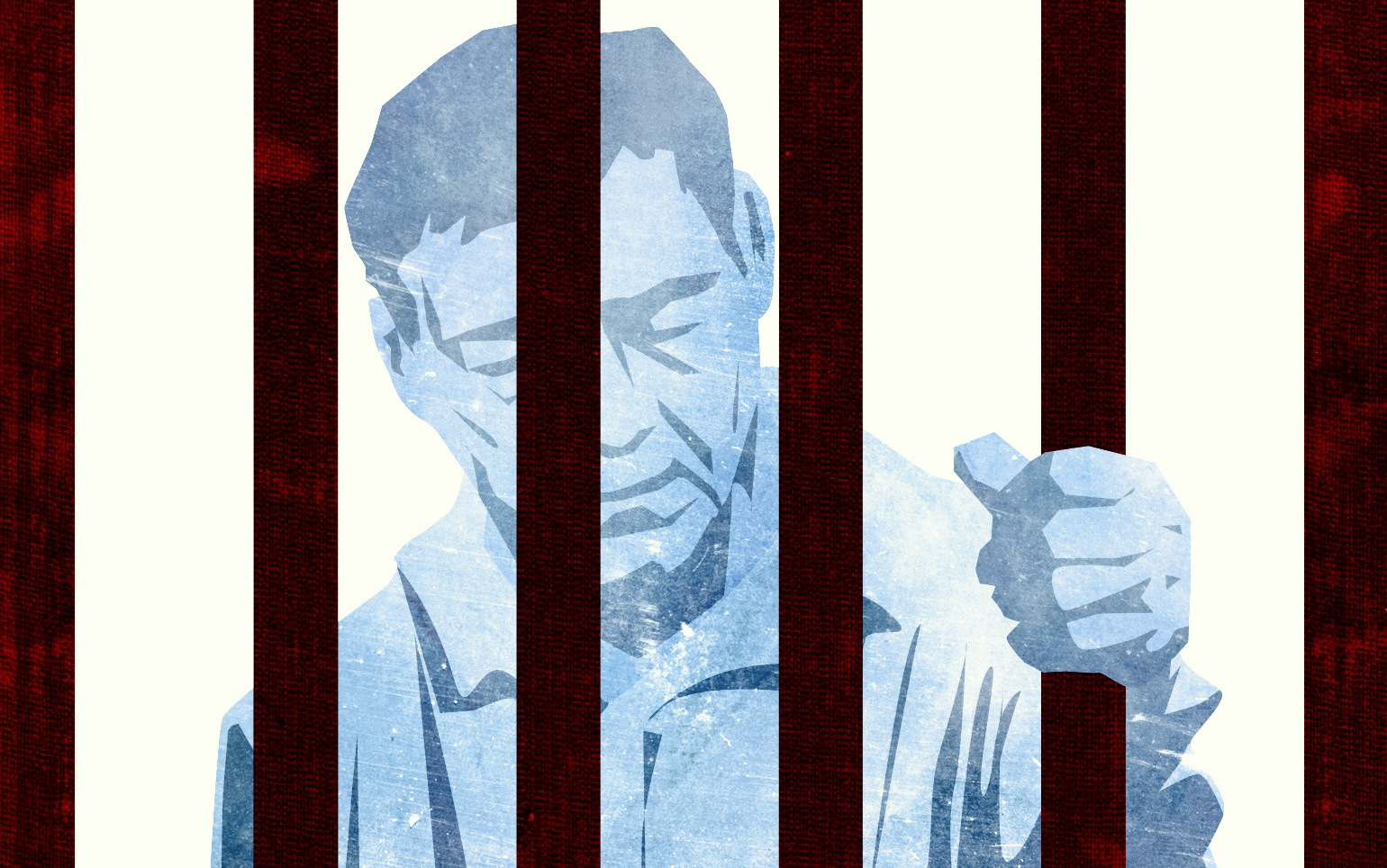 Published in partnership with Shadowproof.
A recently released Department of Justice audit found a Mississippi private prison — which holds over 2,500 immigrant prisoners, most of whom are Mexican nationals—failed to remedy serious problems with staffing and living conditions that led to a deadly riot in 2012.
According to the audit [PDF], the Adams County Correctional Center suffered from chronic under-staffing and an immense language barrier, as around three of 367 staff members were considered fluent in Spanish.
Inspectors argued the contract with the Federal Bureau of Prisons was written to encourage innovation and efficiency in prison management, but in reality, vague language left important aspects up to the discretion of the contractor, CoreCivic (formerly known as Corrections Corporation of America).
CoreCivic intentionally left positions vacant to reduce costs and under-staffed the facility, which is a well-known practice at private prisons because it allows companies to reduce their overhead and increase profits. Five high-paying and important healthcare positions were not filled.
The BOP entered into a contract for Adams County in 2009. The low-security prison for male immigrants is known as a “criminal alien requirement” prison. The BOP extended the contract for two years in 2015 at a value of $468 million. (If the BOP opts to extend the contract a third time, it will be valued at $580 million and last through July 2019.)
The audit stated, as of June 2016, it was the third largest contract with the Department of Justice since 2009.
Language Barriers
In May 2012, a riot at Adams County led to the death of a corrections officer. Prisoners said the uprising was a response to inadequate healthcare, substandard food, and disrespectful staff.
Many of these problems were the result of an enormous language barrier. While nearly every prisoner at Adams County is a Mexican national, over 95 percent of CoreCivic staff do not speak Spanish.
The contract was modified in June 2015 to specify that a minimum of 5 percent staff overall, including 50 percent of intelligence officers, must speak Spanish. In its written response to the audit, dated November 2016, CoreCivic maintained it faithfully met this requirement because 16 of 353 staff were able to speak Spanish (4.5% of all staff).
However, the contract does not require a specific language proficiency level for new hires and CoreCivic does not say or provide evidence to detail how much Spanish these few staff members speak. The BOP has not and still does not validate the speaking ability of CoreCivic staff. As recently as January 2016, a CoreCivic advertisement for employment at Adams County stated the company had no preference for Spanish-speaking applicants.
In February 2016, inspectors identified only three staff members who were fluent in Spanish. None of them worked in the prison’s intelligence unit, which is supposed to investigate and prevent gang and other criminal activity among the prison population.
CoreCivic “readily acknowledged” in a report examining the riot that “recruiting and retaining qualified Spanish-speaking staff in the remote Natchez, Mississippi, area is one of its greatest challenges.” In a nod to the “innovation and efficiency” the BOP baked into the contract, CoreCivic claimed it overcame the language barrier by paying for an over-the-phone translation service for mediation between prisoners and staff.
“Since the contract began, we have relied on a variety of strategies to facilitate communication, including a translation service, Language Line Services, to conduct live, telephone translation for the inmate population,” CoreCivic wrote.
“By using trained professional interpreters, we can reduce miscommunication, eliminate frustration, and ensure candid, open communication during medical examinations, investigative interviews, crises intervention, and responding to requests for assistance. All department managers have access to the language line, and recent expenditures on this service average $5,700 per month.”
CoreCivic also said it relies on contacts at the Mexican Embassy, law enforcement, and “inmate sources” to communicate with prisoners. In addition to recruiting through local high schools and job fairs, CoreCivic said it is also attempting to hire officers from Puerto Rico and provides English as a Second Language (ESL) courses for inmates as well.
Poor Standards & Maintenance For Staffing Levels 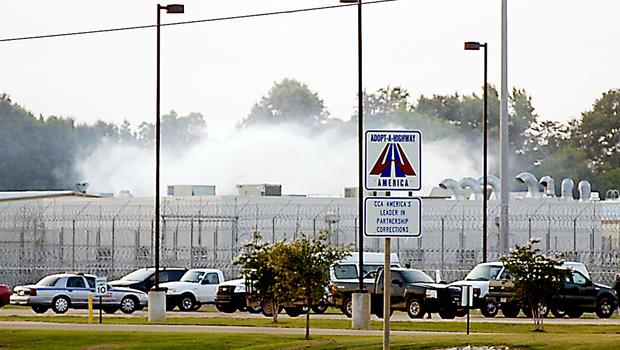 Smoke rises above the Adams County Correctional Center in Natchez, Miss., May 20, 2012, during an inmate disturbance at the prison. (PHoto: AP/The Natchez Democrat)
Despite modifying the contract in the wake of the riot, the Justice Department report found many of the same deficiencies still “plague” the prison four years later. Under-staffing remains a major issue. At times, staffing was lower than at the time of the riot.
The inspector general found CoreCivic hires officers, who would be unqualified to work at prisons operated by the federal government.
CoreCivic has a much higher rate of turnover at Adams County than in comparable BOP prisons. By May 2016, 48 percent of CoreCivic staff were at Adams County for less than one year.
While the BOP pays entry-level correctional officers $18.69 per hour, CoreCivic pays officers $12.60 per hour. There are few opportunities for wage increases, few employee benefits, and few opportunities for career advancement. But the BOP did not write the contract to provide for careers and fair compensation.
The contract does not describe how the facility will be adequately staffed or what that would look like, beyond mandating the fulfillment of numerical benchmarks. And while CoreCivic reported staffing levels that satisfied the contract’s stated requirements, those numbers do not reflect how important positions were left vacant or were filled with inexperienced staff.
CoreCivic was able to meet staffing requirements by telling the BOP the number of employees on payroll, which provides a more generous view of staffing than if they based their count on the actual amount of time people spent filling their positions.
The contractor disagreed with this understanding of appropriate staffing, arguing it is ultimately their choice whether or not to staff certain posts based on the facility’s “real-time needs.” They maintain it is not the BOP’s business to dictate what level of staffing is appropriate.
When inspectors notified the BOP of their concerns with CoreCivic’s staffing practices, government officials stood by the private prison contractor’s work. The BOP joined CoreCivic to express their disagreement with the methodology and findings. CoreCivic called the staffing measurement “inappropriate,” said it had never been used before, and argued it was not based on the contract, the BOP standards, or correctional best practices.
CoreCivic pointed to their compliance with American Correctional Association (ACA) standards and noted the BOP presented the private prison contractor with a $277,723 payment as a reward in June 26, for “performance above the acceptable level.”
Still, five out of seven staff members interviewed by investigators expressed concerns with low staffing levels at the prison.
A January 2015 audit found CoreCivic had not followed policies and standards of care in management of inmate care prior to death in each of the five cases reviewed.
In July 2015, ten of twelve inmates expressed concerns with the quality of medical care. One prisoner was supposed to have a growth on his wrist x-rayed in 2013, but the audit found 28 months later that no x-ray had been conducted. There were also missing and incomplete records related to medical care for other patients.
Inspectors believe the BOP could have deducted around $1.9 million from invoices between 2011 and 2015. Poor oversight by the federal government also allowed CoreCivic to make benefit deductions that were “understated by a total of approximately $42,300.”