Elor Azaria case: ‘No hope of equality before the law’ 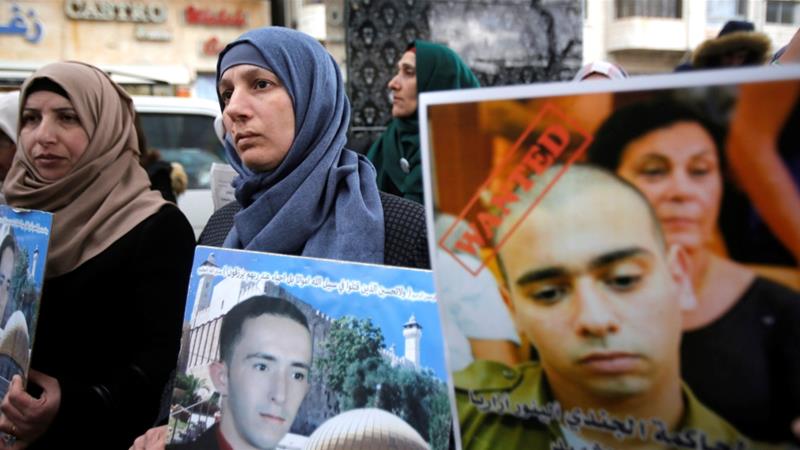 Nazareth – It was the trial almost no one in Israel wanted.

Last March, army medic Elor Azaria was filmed firing a bullet into the head of Abed al-Fattah al-Sharif, a 21-year-old Palestinian, as he lay wounded on the ground in the city of Hebron. After Azaria’s arrest, there was an outpouring of sympathy for the soldier from the Israeli public, politicians and fellow soldiers.

Ordinary Israelis saw him as a victim of bad luck. He was on trial only because his actions had been filmed. Many Israelis felt it could be their own son in the courtroom.

The army command feared the trial risked airing the military’s dirty secrets before the watching world. Some even worried the case might lead to a mutiny among the lower ranks, who identified with Azaria.

Prime Minister Benjamin Netanyahu’s government, meanwhile, worried that the proceedings would force it into an uncomfortable choice between upholding the rule of law and championing the soldier.

Nonetheless, military prosecutors had little choice but to indict Azaria after the video footage went viral.

Aida Touma-Suleiman, a Palestinian member of the Israeli parliament, told Al Jazeera that the context for the trial was the growing fear in Israel that its soldiers would, one day, face scrutiny from bodies like the International Criminal Court (ICC) in the Hague.

“In a clear-cut case like this, it is important for Israel to look as though it is taking war crimes seriously, otherwise the ICC might itself decide to investigate,” she said. “But the case has caused problems because it has upset right-wing politicians and much of the Israeli public, who expect absolute impunity for soldiers.”

Given that mood, the army quickly dropped an initial charge of murder against Azaria. Instead, prosecutors settled for a manslaughter indictment, a decision Sharif’s family denounced this week as a “perversion of justice”.

On Wednesday, Azaria was found guilty of the reduced charge by a military tribunal. The three military judges ruled: “He opened fire in violation of orders. The terrorist [Sharif] did not pose any threat.”

Azaria’s lawyers announced they would appeal.

Although the court is empowered to jail Azaria for up to 20 years, it is certain to find grounds later this month for awarding a lenient sentence.

The riots outside the court that greeted Azaria’s conviction, and the subsequent decision to issue the judges and prosecutor with bodyguards, will contribute to the pressure on them.

Even before the sentencing, politicians, including Netanyahu, launched a campaign to pressure President Reuven Rivlin to pardon the soldier.

Touma-Suleiman said that historical precedents, such as the amnesties given to security officials involved in the Kfar Qassem massacre and the Bus 300 affair, suggested that the campaign stood a good chance of success.

“There has been a reign of terror designed to silence anyone who has tried to stand up for human rights and the rule of law in this case,” she said.

If the aim of the trial was to demonstrate to the world that Israel holds its soldiers properly to account when they commit crimes, it has probably failed.

BTselem, an Israeli human rights group that first publicised the video of the Hebron shooting, said in a statement to Al Jazeera that Azaria’s conviction was “exceptional”. In most cases where soldiers were suspected of executing Palestinians, the group said, there was “routine whitewashing” by the army.

Azaria is, in fact, the first Israeli soldier to be charged with manslaughter since 2004, when a Bedouin sniper was convicted of killing Tom Hurndall, a British activist in Gaza.

Yesh Din, another Israeli human rights group, issued a report this week noting that no investigations were conducted into the killing by Israeli soldiers of 76 Palestinians in the occupied West Bank last year. The data, it said, showed an “inability and unwillingness” to address unlawful conduct by soldiers.

Adalah, a legal centre for Israel’s Palestinian minority, noted that there had been “zero indictments” in a range of attacks it had identified by Israel that killed Palestinians during Israel’s 2014 assault on Gaza.

Paradoxically, the lesson the army may have learned from Azaria’s trial is the need for even greater secrecy.

Last April, weeks after the Hebron shooting, Israeli security guards shot dead a Palestinian brother and sister at the Qalandiya checkpoint, near Jerusalem. Israeli authorities have repeatedly refused to release footage from the checkpoint’s security cameras.

The Haaretz newspaper described the decision in October to drop the investigation, despite clear evidence that Maram and Taha Abu Ismail posed no threat when they were shot, as “an official licence to kill”.

Amid the unconvincing defences offered by Azaria’s legal team, one argument hit home: that many cases similar to Azaria’s had been closed, including an investigation into an army colonel, Yisrael Shomer, who was filmed shooting dead a fleeing Palestinian teenager in 2015. Azaria, said his defence team, was being singled out.

Azaria’s conviction is also likely to prove ineffective at underscoring to Israeli soldiers the need to abide by Israel’s rules of engagement.

A poll by the Israel Democracy Institute (IDI) in September found that 65 percent of Israeli Jews backed Azaria’s execution of Sharif. Among Israelis aged 18 to 24, when many Israelis are serving as conscripts, support for his actions rocketed to 84 percent.

The Israeli media has largely sided with Azaria, presenting him as “the child of us all”. Two Israeli publications even selected him as their “man of the year”.

“The attitude of the Israeli public was clear,” Yedidia Stern, a researcher at the IDI, told Al Jazeera. “They thought, “We put him in a uniform, we gave him a gun and we placed him in harm’s way in the occupied territories. He may not be a hero, but he is not a criminal either. He is our boy.”

The popular image of a callow teenager who momentarily lost his bearings in the confusion of Hebron is hard to sustain in the face of his known views. His social media posts reveal a youth who vented ugly, rabidly anti-Arab views even before he joined the army.

During the 2014 Gaza war, Azaria called for every Palestinian in Gaza to be massacred. He also declared his support for the late Meir Kahane, a rabbi whose anti-Arab Kach party was outlawed in 1994 after a follower, Baruch Goldstein, shot 29 Palestinians in Hebron’s Ibrahimi mosque.

During the trial, it emerged that Azaria, like many of the soldiers serving with him, had befriended former Kach leaders among the settlers in Hebron. Every Sabbath, he and other soldiers, including senior commanders, would visit the home of Baruch Marzel, a former disciple of Kahane, for lunch. 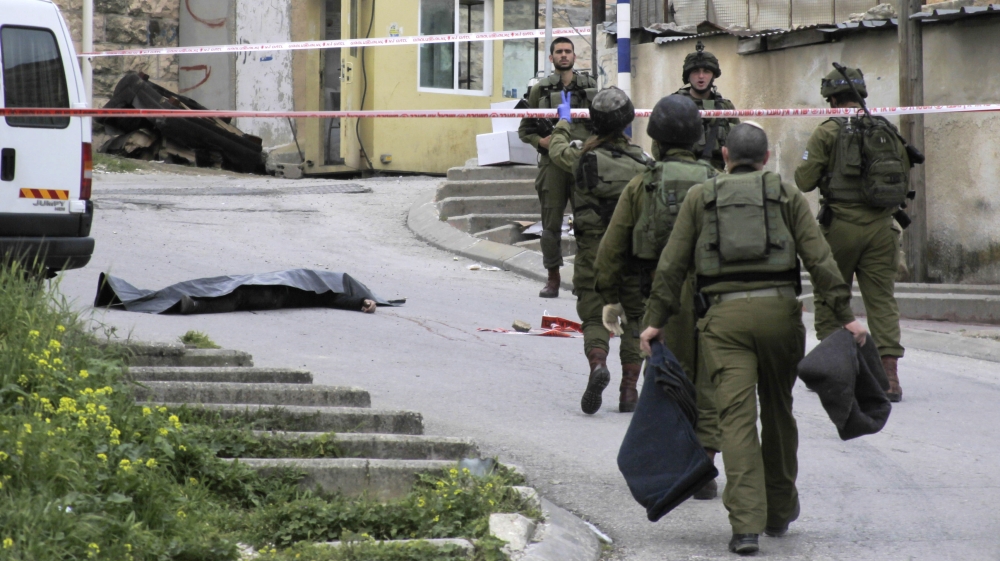 A video shows Azaria, after shooting Sharif, walking over to smile with Marzel and shake hands.

Other footage shows another settler, ambulance driver Ofer Ohana, goading the soldiers to execute Sharif when the Palestinian showed signs of life, after earlier being critically wounded during a knife attack on a checkpoint.

Ohana can be seen kicking a knife closer to Sharif after his execution by Azaria, presumably to help create a justification for the killing.

A report published this month by military prosecutors found that it was routine for soldiers and settlers to tamper with evidence at sites where Palestinians had been shot. Efforts to investigate were often rendered futile as a result.

Human Rights Watch has noted that, in the months before the Hebron shooting, senior government ministers and security officials had repeatedly called for a “shoot-to-kill” policy against Palestinian attackers, even when they posed no threat.

Separately, both the Sephardic chief rabbi, Yitzhak Yosef, and the army’s chief rabbi, Eyal Karim, have called for the execution of Palestinians suspected of attacks.

But more significantly, senior military figures broke ranks during the trial to voice support for extrajudicial executions, indicating that officers in the field may be regularly turning a blind eye to crimes like Azaria’s.

Uzi Dayan, a former deputy chief of staff, testified in Azaria’s defence. He declared that he had personally covered up for his own soldiers when they killed Palestinians without justification.

In one case he cited, his troops had shot dead five Palestinians returning home from work. He had blocked an investigation. Such matters should not be aired in public, he added.

Speaking more generally about extrajudicial executions, he said: “I’ve ordered to kill terrorists just because they’re terrorists, regardless of their condition, whether they are dangerous or not.”

Another general, Shmuel Zakai, who commanded Israeli forces in Gaza, told the court he found Azaria’s behaviour “reasonable”. He said: “I did not see anything unusual in this conduct.”

Touma-Suleiman pointed to the stark contrast between Azaria’s trial and that of Ahmed Manasra, a 13-year-old Palestinian who was jailed for 12 years in an adult prison in November.

An Israeli military court found the child guilty of attempted murder, even though the judge accepted Manasra had stabbed no one in an attack in Jerusalem in 2015. His older cousin, who was shot dead at the scene, had been responsible for stabbing two Israelis.

“Manasra is a child, but the military court system dealt with him far more harshly than it has a soldier like Azaria,” she said. “When the occupier is judge and jury, there is no hope of equality before the law or of justice.”