Buses expected to begin carrying fighters and civilians out of embattled Aleppo amid reports of summary executions. 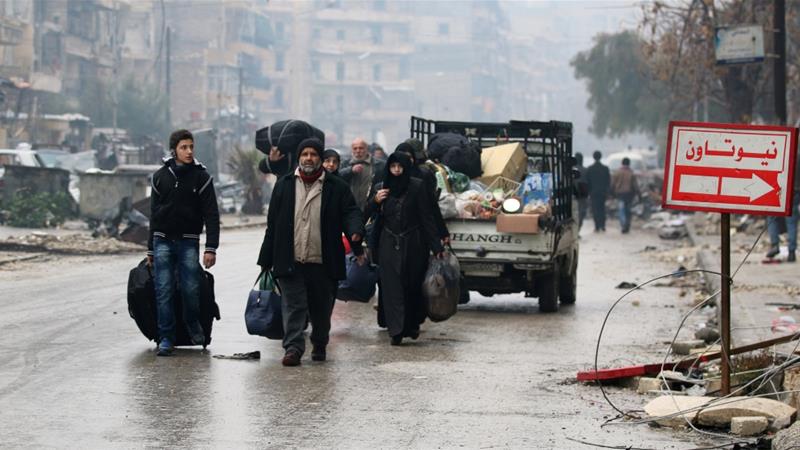 An agreement for the imminent evacuation of civilians and opposition fighters from east Aleppo in Syria has been reached, according to rebel officials.

After weeks of heavy fighting, government forces took full control of Aleppo on Tuesday, dealing the biggest blow to Syria’s rebellion in more than five years of civil war.

Russia’s UN ambasador announced late in the evening that all military action in east Aleppo had come to a halt and that the Syrian government was in control of the area.

“Over the last hour we have received information that the military activities in east Aleppo have stopped, it has stopped,” Vitaly Churkin told a heated emergency UN Security Council meeting.

“The Syrian government has established control over east Aleppo.”

Fears have been growing for thousands of trapped civilians as the opposition fighters make a desperate last stand in their remaining pocket of territory in their former stronghold.

“An agreement has been reached for the evacuation of the residents of Aleppo, civilians and fighters with their light weapons, from the besieged districts of east Aleppo,” Yasser al-Youssef, from the political office of the Nureddin al-Zinki rebel group, told the AFP news agency.

He said the deal was “sponsored by Russia and Turkey” and would be implemented “within hours”.

A Syrian military source confirmed the deal to the Reuters news agency and said evacuations would begin at 5am local time [03:00 GMT] on Wednesday.

The rebels would leave towards western Aleppo countryside, the source said.

Huseyin Muftuoglu, a Turkish foreign ministry spokesperson, told Al Jazeera that the first civilians would be evacuated from Aleppo, followed by opposition fighters.

“They would move towards Idlib, according to the plan,” he said. “There is no plan to take them into Turkey.”

News of the deal broke just minutes before the Security Council meeting on Aleppo began at UN headquarters in New York City.

When asked by reporters shortly after the meeting if the fall of Aleppo was the end of the peace process, Staffan de Mistura, UN Syria envoy, said it “should be just the opposite”.

“We should be looking at this as a tragic opportunity to restart the political process.”

A source in the powerful Ahrar al-Sham anti-government group also confirmed the deal, saying civilians and then fighters would be evacuated on buses to either western Aleppo province or Idlib.

Osama Abu Zayd, a legal adviser for an umbrella group of rebel factions known as the Free Syrian Army, told the Associated Press news agency that the deal went into effect on Tuesday evening.

There was no immediate comment from the Syrian government or Russia on the reports.

Haid Haid, a Syrian researcher and associate fellow at Chatham House, said the deal was more of “a surrender, not a ceasefire”.

“This situation will be similar to previous situations: rebels and civilians … would be allowed out, most likely to rural Aleppo or Idlib, and the Syrian regime will take over the rest of Aleppo,” he told Al Jazeera.

But with Syrian government and its allies making steady progress on the battlefield, many are unsure that any deal would take place, Haid said.

“Negotiations have been ongoing for days now, and now the regime is sure that [it] is winning.

“So unless there is serious pressure from the international community on Russia, on the regime, I think this deal might not even happen because they think they’re winning … why allow [the rebels] out if we can kill the rest of them there and now.”