Ghana election: what you need to know 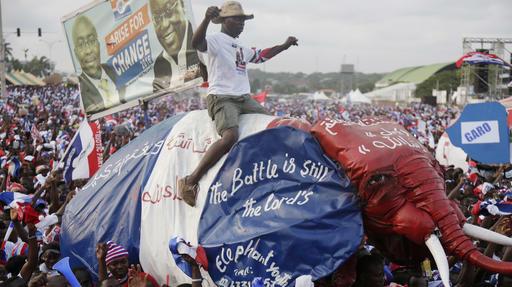 Two old foes are stepping back into the ring to fight in Ghana’s hotly contested presidential election on December 7.

This is the second time that President John Mahama of the governing National Democratic Congress (NDC) faces off against Nana Akufo-Addo, leader of the New Patriotic Party (NPP), who is making his third and likely final bid for the top job.

In 2012, Mahama eked out a narrow victory, taking 50.7 percent to Akufo-Addo’s 47.7, which the defeated candidate unsuccessfully challenged in court.

Who are the candidates?

Mahama, 58, has the incumbent’s advantage and has spent big money on infrastructure projects in the run-up to the vote.

He took power in 2012 after the sudden death of his predecessor John Atta Mills. The affable statesman is popular in Ghana where he is seen as a man of the people.

But he has been forced to defend his leadership as the country experiences a slowdown in economic growth and a series of corruption scandals, including the sacking of over 20 judges implicated in a 2015 bribery scandal.

Still, he has defended himself with trademark good humour. “I, being a mere mortal, may have made mistakes, but I believe that in every mistake I made, I’ve done it in good faith to serve my nation,” Mahama said in a November interview.

Akufo-Addo, a 72-year-old human rights lawyer who has served as both justice and foreign minister, doesn’t have Mahama’s appeal, but is a respected option for frustrated voters.

His relatively liberal NPP party has campaigned on the slogan “one district, one factory” to cut unemployment and has promised to slash corporate taxes to boost private sector investment.

Akufo-Addo is likely to capitalise on the country’s dismal economic performance and the corruption scandals that have angered Ghanians who pride themselves on good democratic governance in a continent dotted with dictators.

What are voters angry about?

Despite being a resource-rich country, whose top exports are cocoa, gold, diamonds, bauxite and manganese, government revenues have plunged in sync with a drop in global commodity prices.

And the problem has worsened under the NDC-led government, which spent huge amounts on public salaries, energy subsidies and debt servicing, according to research firm Africa Practice.

“There’s perceived high corruption in the Mahama administration, and the scandals have come one after the other,” Kwesi Koomson, Ghana analyst for Africa Practice, said. “There is this appetite for change.”

Who is the favourite?

Ghanaians may cast their ballot for change, and elect Akufo-Addo in a bid to resurrect the economy, said Paul Nugent, African history professor at the University of Edinburgh. “I suspect the Ghanaians are sick of the NDC at this point,” he said. “There’s a strong sense that you get two goes and then it’s someone else’s turn.”

Yet given Ghana’s history of extremely close elections, a Mahama win is still completely conceivable. Whoever wins, the campaign itself has been extremely “divisive”, Nugent says.

Akufo-Addo and his NPP have lambasted the Electoral Commission of Ghana, claiming it is biased in favour of the NDC, setting the stage for potential unrest if the results are very close. “There’s a certain edginess to this election,” he said, “a decisive election will probably be the best result.”

But if Akufo-Addo contests the results like he did in 2012, “there’s going to be pressure to go out into the streets”, he warned.

Despite a brutal year, Ghana is still viewed as a stable place where democratic institutions are respected. And even if the result is contested, there is no expectation of widespread violence.

Economic forecasts for the country are looking up, with growth predictions for 2017 at 6.7 percent, driven by a growing oil sector, according to investment bank Renaissance Capital.

“Maybe it’s not the shining light it has been in previous decades – it’s certainly lost some of its lustre – but Ghana is still a better performer than many sub-Saharan African countries,” said Daniel Richards, ‎a sub-Saharan Africa analyst at BMI Research. “It’s still a decent country in which to do business.”