The power of hasbara culture 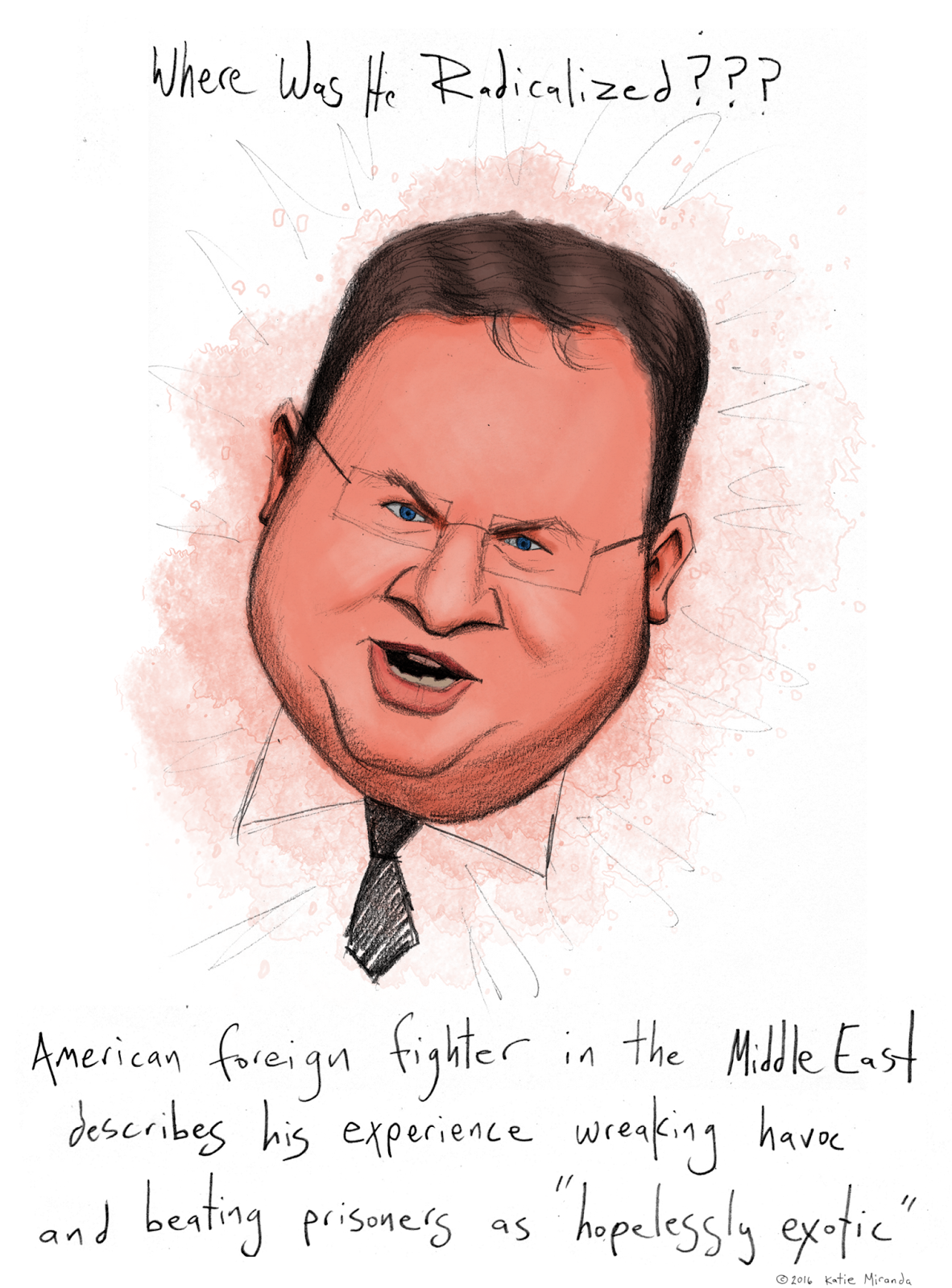 In my last article, I compared the opposition to the Palestinian-led Boycott Divestment and Sanctions movement (BDS) of two influential Jewish journalists, Jeffrey Goldberg and Peter Beinart. I demonstrated that as Zionists they both opposed the BDS movement but with significant differences. I gave examples of Jeffrey Goldberg demonizing and dehumanizing BDS supporters as Jew-haters, while Peter Beinart found no reason to doubt the movement’s integrity: it was motivated by concern for Palestinian rights, not hating Jews. What is more, he charged that those who dehumanize BDS supporters are no better than anti-Semites:

By denying that they might have any reason besides bigotry to dislike Zionism, it denies their historical experience and turns them into mere vessels for Jew-hatred. Thus, it does to Palestinians what anti-Semitism does to Jews. It dehumanizes them.

This divergent stance on BDS raises the question about where other segments of the Jewish community stand regarding the motivation of the BDS movement. For example, what about the Anti-Defamation League, which bills itself as “the nation’s premier civil rights/human relations agency, ADL fights anti-Semitism and all forms of bigotry, defends democratic ideals and protects civil rights for all.”

As strong supporters of Israel, the ADL’s avowed commitment to civil rights for all and “imagine the world without hate” campaign is tested by BDS. Will it find BDS understandable, like Peter Beinart does? Or will the ADL turn the BDS movement into “mere vessels of Jew-hatred” as I showed Jeffrey Goldberg does? Here is an ADL tweet: 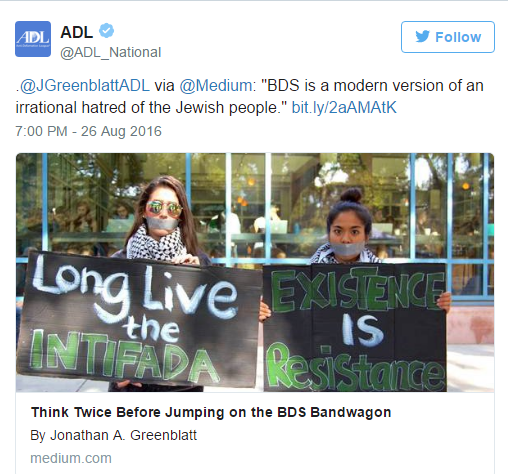 Jonathan Greenblatt dehumanizes supporters of BDS in the same way Jeffrey Goldberg does. He believes the Palestinian people don’t have their own national narrative, their own story, that is not Jewish-centric. Greenblatt wants us to assume that those two women in the photo in his tweet hate Jews.

It doesn’t seem to bother the head of the Anti-Defamation League that he is defaming those two women. In the real world these pro-Palestinian activists have nothing to do with “irrational Jew hatred.” But the ADL tweet is akin to the Jeffrey Goldberg tweet in my last article, saying that Norwegian musicians supporting BDS have Nazi pedigree.

Greenblatt’s tweet reveals something important besides dehumanization; it exhibits incoherence.

“BDS is a modern version of an irrational hatred of the Jewish people.”

ADL accusations of anti-Semitism like this bear little relationship to reality. They emanate from the Orwellian world that I think of as “hasbara culture.”

The narrative of victimhood and the politics of Jewish ethnocentricity cultivated by Netanyahu and Bennett, are part of the social construction of reality of hasbara culture. That is the unabashed Jewish tribalism that we see from Israel every day. It is being so ethnocentric you can’t even believe the Palestinians can be ethnocentric too. In hasbara culture every type of Palestinian resistance to Israeli occupation is about Israel; is about “the Jews.” The tribal Bennett, the ethnocentric Bennett, “knows” Elor Azaria is a good Jewish boy, that he is one of “our children,” and that it’s a moral outrage that he is in prison for killing a Palestinian enemy. The language, “the words that work” as Frank Luntz put it in advising people how to defend Israel, used to justify a pardon of Azaria to a disbelieving world would be “hasbara.”

Hasbara culturists often successfully impose their ethnocentric view on reality. I remind the reader of an incident this summer, about which I have already written, where Greenblatt of the ADL and hasbara culture simply overwhelmed reality.

Recall the incident in Philadelphia, away from the commotion of the Democratic Convention floor, where Congressman Hank Johnson (D., Ga.), a member of the House Armed Services Committee, gave his impressions of his recent trip to the occupied territories, during a roundtable discussion at the American Friends Service Committee called “progressives for Palestine”:

No one in the real world can listen to the voice of Congressman Johnson using the word termites and believe he intended to dehumanize settlers. He didn’t. It goes without saying, “the termites” refers to settlement expansion; not people.

But witness the hysteria in the world of hasbara culture. Johnson was even called “diseased.”

To repeat, Hasbara culture is an aggressive, proselytizing culture constantly placing pressure on the real world. And pressure often of a highly-politicized character, to make the real world acknowledge that the Jewish ethnocentric reality is an accurate reflection of reality. 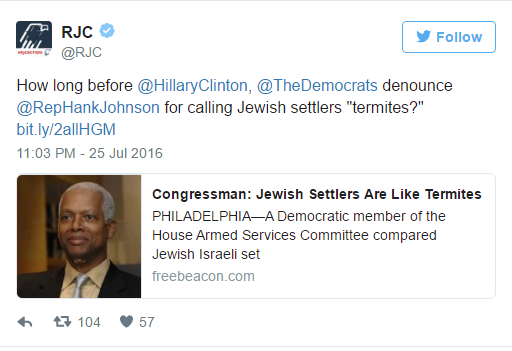 That’s a good way to understand the transaction that goes on between politician and the audience at the Israel lobby group the American Israel Public Affairs Committee, AIPAC. The politicians tell the AIPAC audience that their ethnocentric view of the world is exactly right. And the audience becomes delirious hearing smart powerful Goyim tell them they see the world exactly the way hasbara culture does.

Read my entire article, “Using Rep. Johnson’s innocent comment to stain his reputation was the real crime,” for all the Kafkaesque apologies that the browbeaten Congressman had to issue. The innocence of Hank Johnson’s “termites” is entirely lost to ethnocentrics from hasbara culture.

Moreover, the attacks on him served to draw attention away from his point about Palestinian suffering caused by the settlers and occupation.

Hasbara culture also has its own jargon. Back to the Greenblatt tweet about BDS again:

“BDS is a modern version of an irrational hatred of the Jewish people.”

This tweet is hasbara culture jargon. Think what the literal words of Mr. Greenblatt’s tweet is claiming. It makes no sense. What is irrational about BDS? And what connection does BDS have to ancient Jew hatreds? None. But these arguments don’t matter because reason and logic have no place in hasbara culture.

In the real world, as Peter Beinart explained so plainly, BDS is a rational and predictable result of the Israeli occupation. In hasbara culture, BDS is somehow related to a pogrom against Jews in eastern Europe hundreds of years ago. Although this connection cannot be empirically made out, who is going to challenge the ADL on what words they use to define anti-Semitism? Nobody in mainstream American life with any sense.

Recall the brouhaha over the Atlantic‘s announcement of its new editor-in-chief, Jeffrey Goldberg. In an article at Mondoweiss, Phil Weiss noted Goldberg’s missing Jewish/Zionist identity in the Atlantic Goldberg resume.

I showed in a response to Mr. Rosenberg that no honest reader could construe that Mr. Weiss’s “attack” on Goldberg was for being a Jew.

What, then, was Mr. Greenblatt’s reaction to the Mondoweiss-Tablet battle? Did Mr. Greenblatt think Phil Weiss did anything wrong?

This tweet says and means nothing. It’s hasbara culture jargon. Weiss’s article was about the rebranding of Goldberg by his employer, and would not lead any objective reader to conclude they were reading a “warped pathological attack” on Jeffrey Goldberg’s for his “faith.”

Besides, we have already seen Jeffrey Goldberg labeled a “never again” journalist and a “fearful tribalist” by two Jewish journalists: Ezra Klein and Paul Starobin. Does Mr. Greenblatt believe that these men attacked Jeffrey Goldberg “4 his faith” with those descriptions of him?

Hasbara culture and Mr. Greenblatt exist in a world where those questions aren’t faced.

But even more important than “never again” journalist and “fearful tribalist,” I think Jeffrey Goldberg is best understood as a “hasbara culture” journalist.

Jeffrey Goldberg has been the most aggressive proselytizer in America for hasbara culture and its highly politicized character. In posts to come, I will show the impact his Jewish ethnocentrism has had on the discourse of the Iran nuclear program. I will show what happens when Jeffrey Goldberg takes the “fearful tribalism” he experiences when he looks out into the world, and doesn’t realize that this view is “irrational,” to use the ADL’s word: that he is possessed by fantasies of destruction.

That article will begin the important process of understanding how hasbara culture came about and its effects. How it is possible that hasbara culture is so effective, is so powerful that Jeffrey Goldberg, who can only be taken seriously as an objective journalist in hasbara culture, has become editor in chief of the Atlantic magazine?