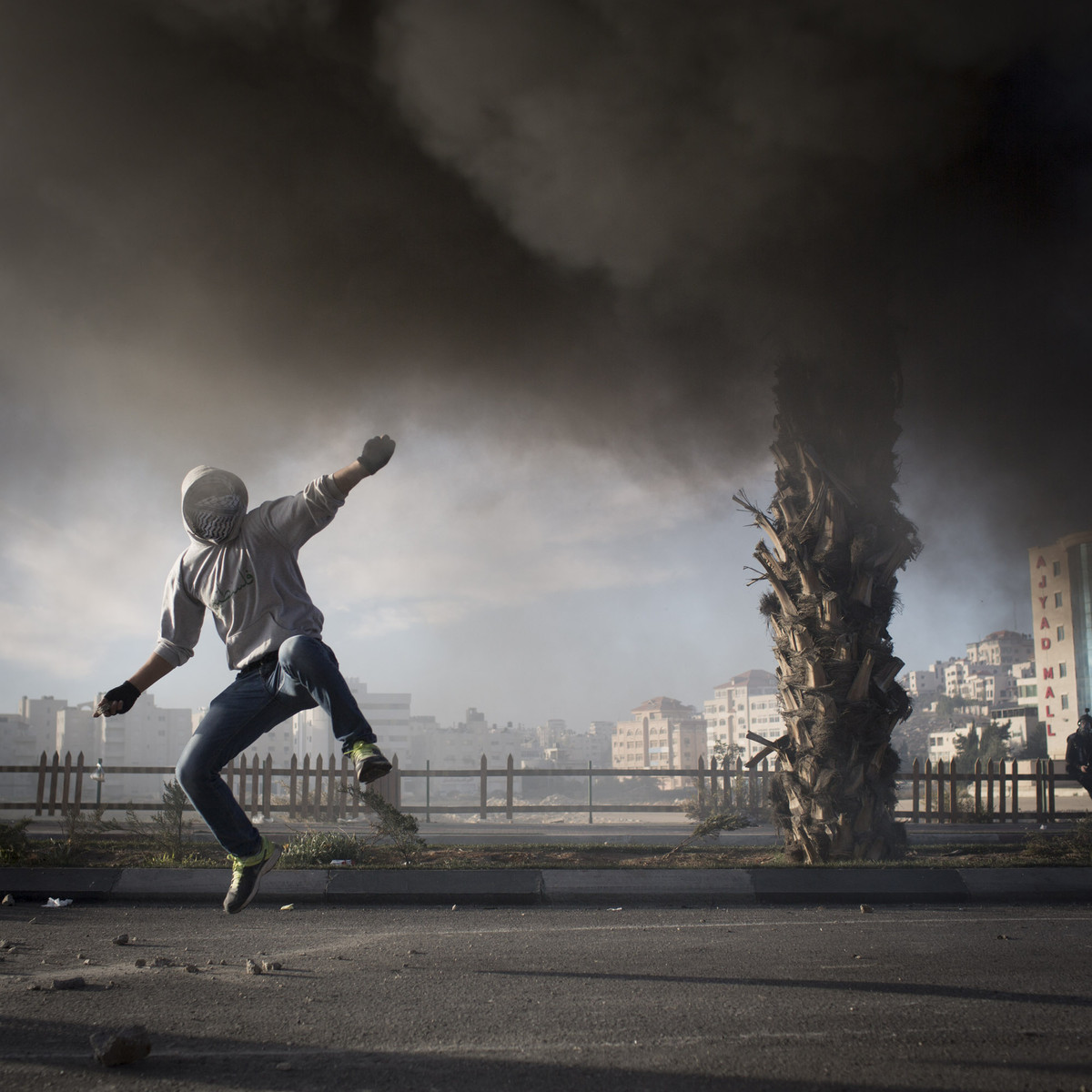 “Persistence and survival are … the enabling conditions of both the struggle and the photographs,” writes co-editor Vered Maimon. A protester during confrontations with Israeli forces north of the West Bank city of Ramallah, near the Beit El settlement, November 2015.
Activestills: Photography as Protest in Palestine/Israel, edited by Vered Maimon and Shiraz Grinbaum, Pluto Press (2016)

“Photography is an act. It’s not just [about] producing images … it’s an act of protest,” said Vered Maimon, the co-editor, with Shiraz Grinbaum, of the new book Activestills: Photography as Protest in Palestine/Israel.

The book showcases 500 images taken by the Activestills photography collective over the last decade in Palestine.

Oren Ziv, a longtime photographer with the collective, told The Electronic Intifada that Activestills aims to provide “long-term documentation of a situation” where daily violence affects communities and shapes physical and political landscapes.

Activestills has carved out a “new form of practice in which documentary photography becomes a collaborative project,” Maimon told The Electronic Intifada.

The photographers don’t just arrive at an event, take a few photographs and then leave, she said: “They’re both photographers and activists, so they take part in the struggle.”

“Behind the frame”
Ziv told The Electronic Intifada that part of Activestills’ aim is to support communities and “make struggles more visible, but also so that the community itself can use the images.”

He has documented the struggle in al-Araqib, a village in the Naqab desert in present-day Israel which has been destroyed more than 100 times since 2010 as the Jewish National Fund aims to plant a forest on village land.

Ziv said that photos he and his colleagues took during the first demolition of the village were used by the community “to show how the village looked before.”

After the first destruction, he said, “it was hard to imagine that beforehand, there was actually a village [there].”

Residents of al-Araqib also use the photos in their campaigning to stop the forced transfer of their community.

“An event in the field of photography”
For the book, Activestills photographers interviewed people they had documented in order to get “the story behind the frame,” said Ziv.

Activestills also puts on guerrilla street exhibitions, and the first 18 images of the book – all full-page, presented without captions or commentary – show these displays and how the public interacts with them.

“Participants in the conflicts view themselves in the photographs, and Activestills will document this act of viewing yourself as part of a community,” Maimon explained.

Co-editor and Activestills’ Shiraz Grinbaum said that the curation and writing process, which took place over several years, was “fascinating.”

The collective, she said, “wanted to tell the story of Activestills as an event in the field of photography, and as an event here in Palestine-Israel.”

Listen to the full interview with Maimon, Ziv and Grinbaum via Soundcloud.

Editor’s note: A previous version of this article incorrectly stated that there are 800 images in the book instead of 500. It has been corrected.

Text by Nora Barrows-Friedman, associate editor of The Electronic Intifada. All images by Activestills. 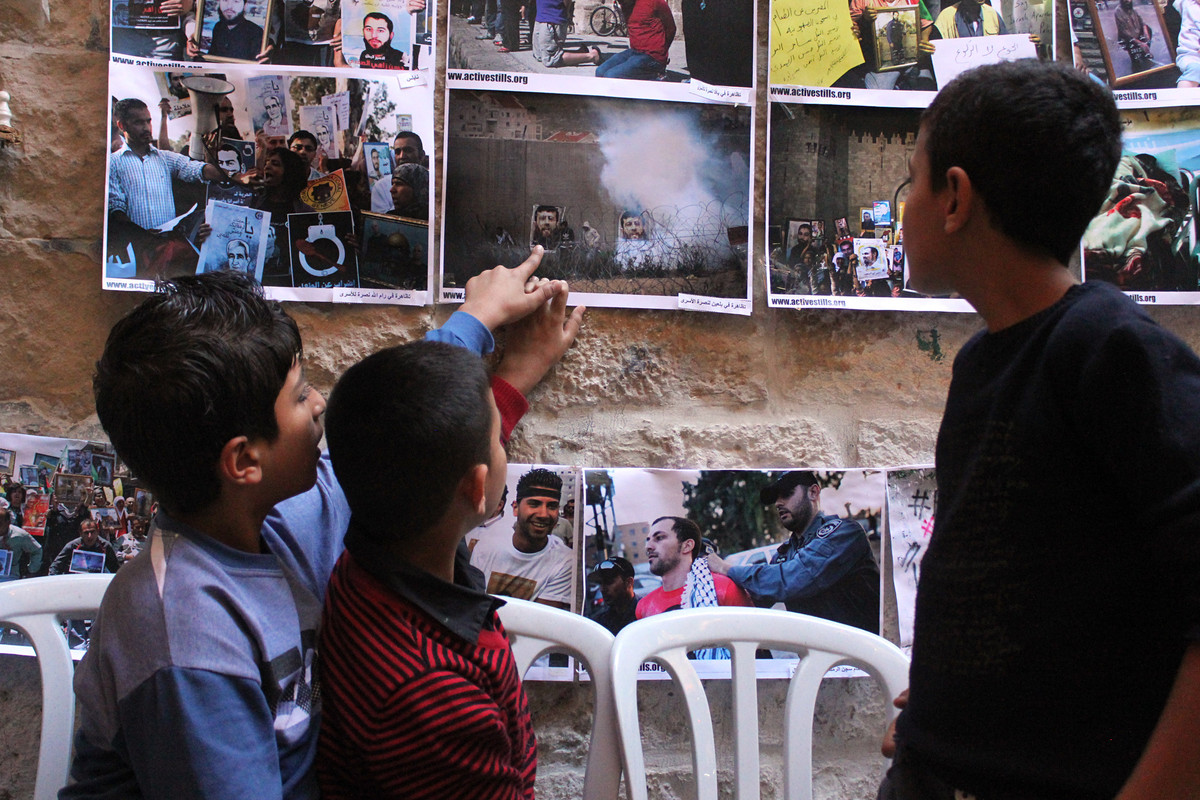 An Activestills exhibition is displayed near the house of the Palestinian hunger striker Hassan Safadi upon his release from Israeli prison, the West Bank city of Nablus, October 2012. 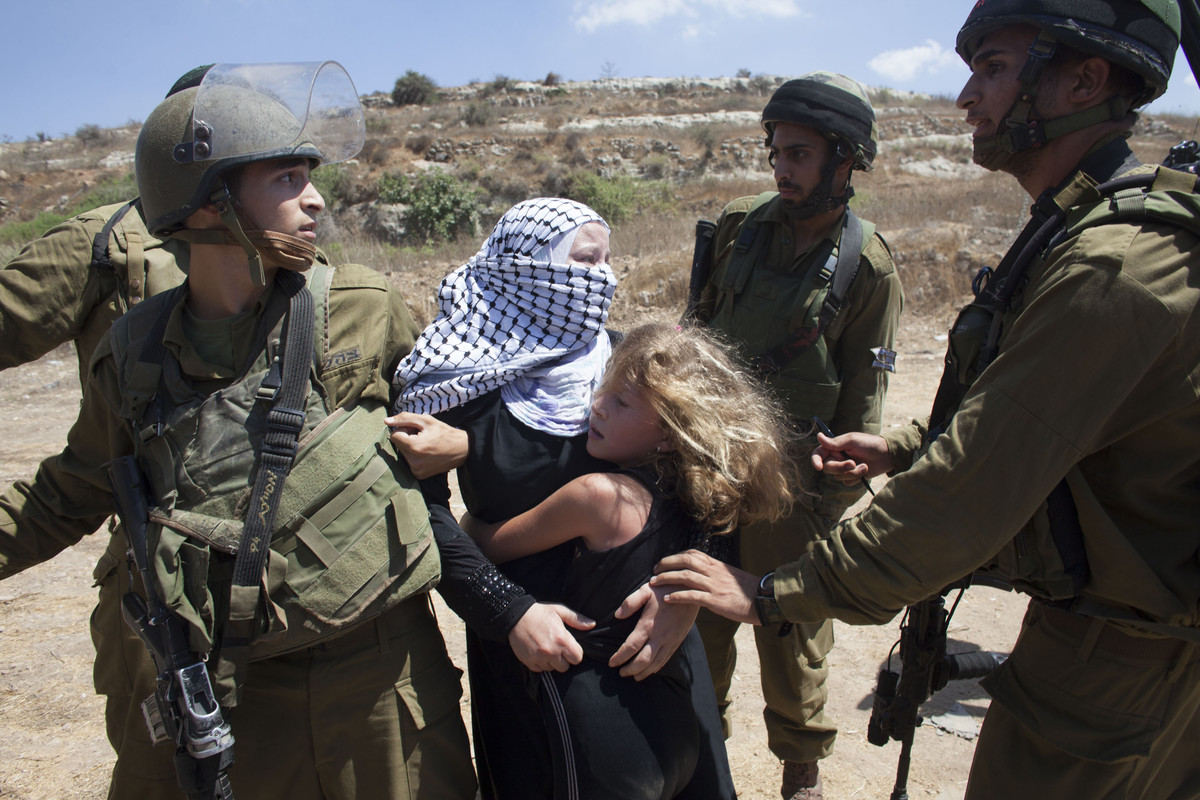 In the West Bank village of Nabi Saleh, Israeli soldiers arrest Nariman Tamimi, a photographer herself, as her 8-year-old daughter, Ahed, tries to free her during a protest against the occupation in August 2012. Nariman tells Activestills: “My connection to the camera is very significant; I think of the camera as a kind of weapon because with the camera and the photographs I take, I talk with the other, so that he/she will change his/her mind, because I see the vast majority of Israelis as victims of the occupation, just like the Palestinians are victims. With my weapon, the camera, I show them the truth about the occupation that the Israeli government is trying to hide from them. I try to revive the humanity in the other.” 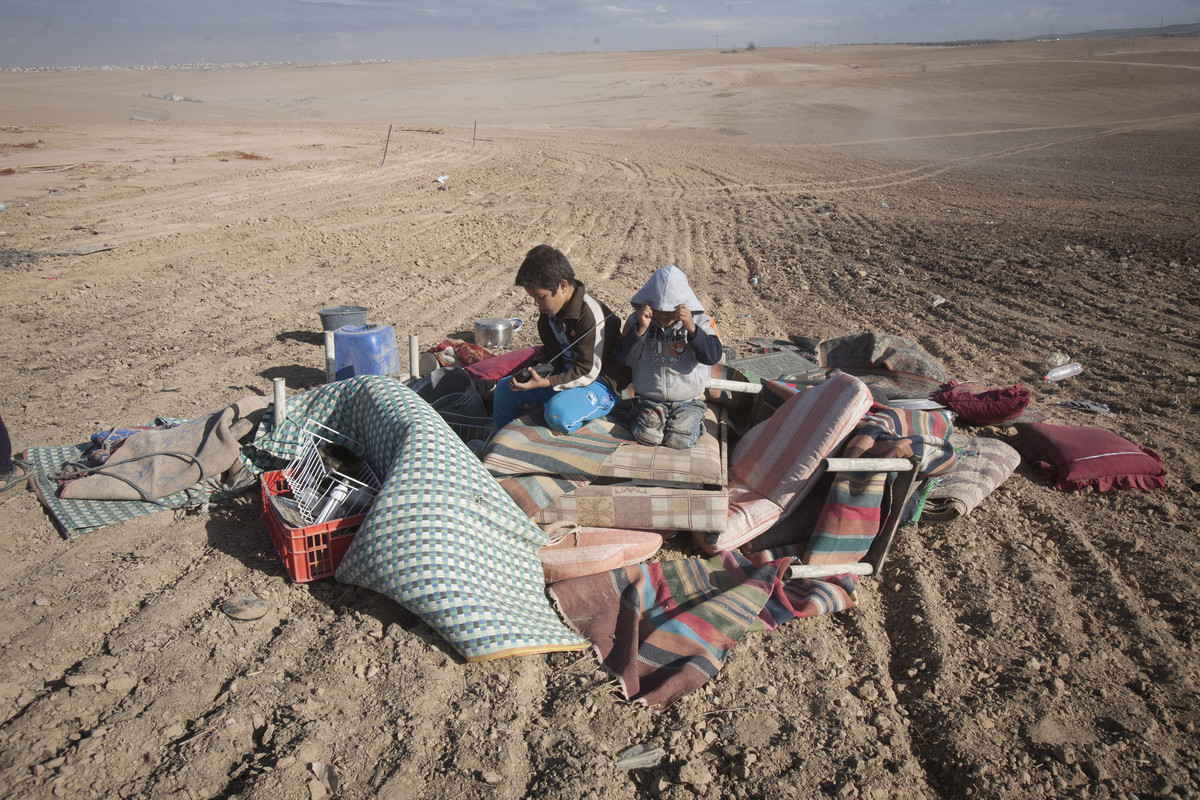 In al-Araqib, Activestills photographer Oren Ziv told The Electronic Intifada, international media “didn’t see the connection between the [situation for] Bedouins to the Palestinian issue in general … Only later when the Prawer Plan came and al-Araqib was demolished so many times, people started to see the connection between the displacements of the Bedouin to other forms of displacement in Palestine.” Children sit amidst their belongings after a demolition in al-Araqib village in the south of present-day Israel, October 2009. 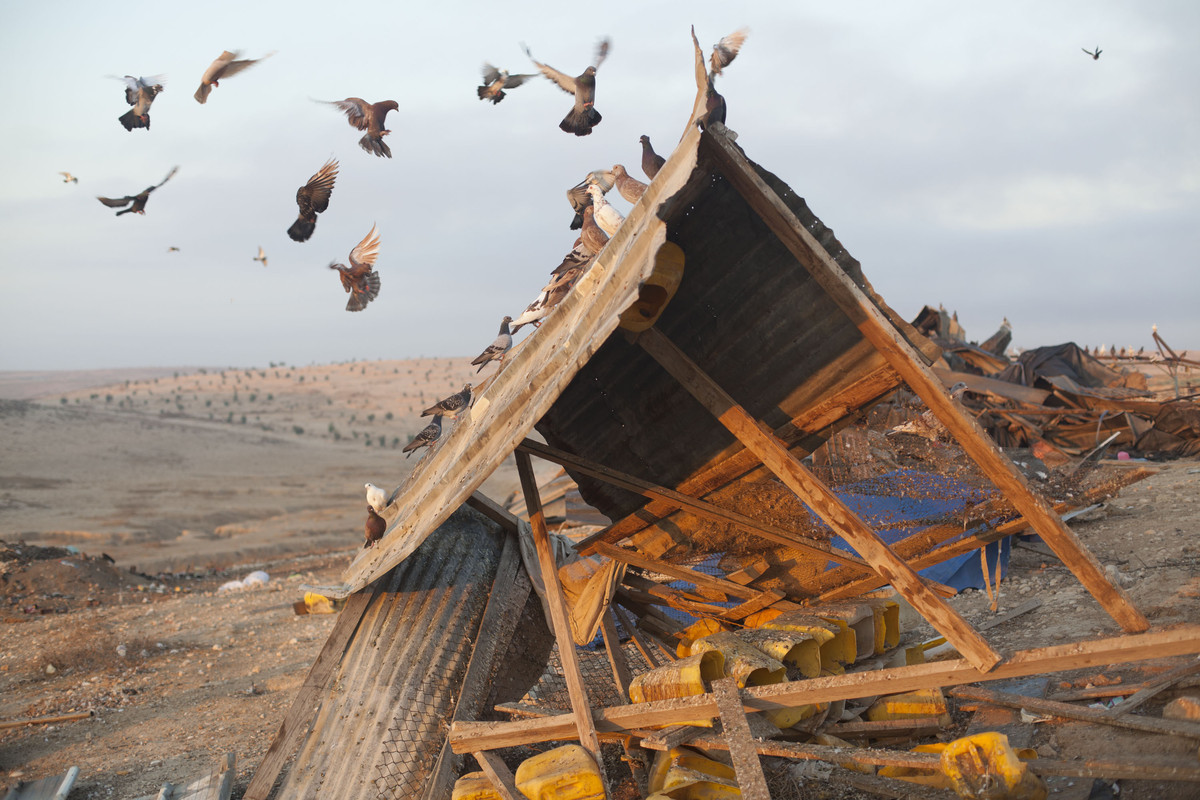 “When I tell people about al-Araqib, I say that this is the only place in the world where they chase people away and then plant trees instead,” Ziv said in conversation with residents of al-Araqib published in the book. “All over the world, trees are cut down in order to make room for human beings, in order to build a city or a village and here, the [Jewish National Fund], which serves the civil municipality, cooperates with the attempt to drive you out and after the fact to plant a ‘forest’ on your lands in place of the village.” Doves hover next to a demolished bird coop in al-Araqib, September 2010. 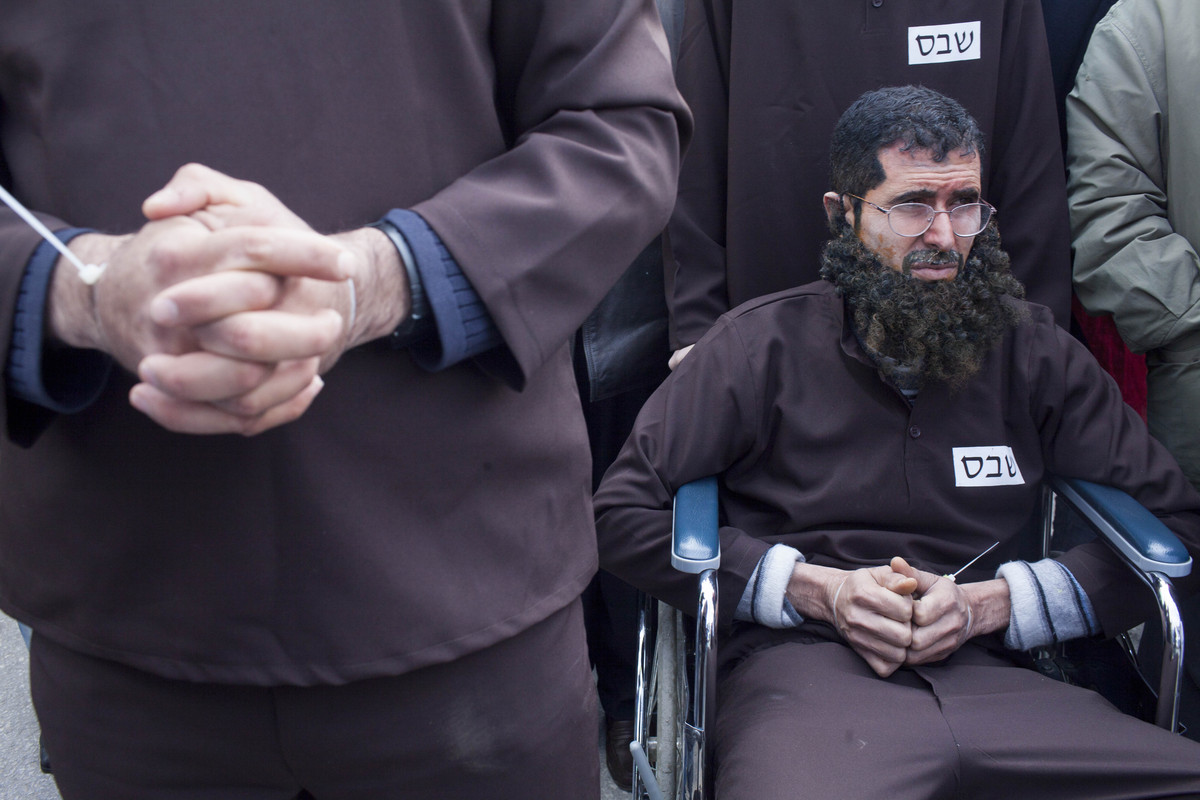 “In directing their audience’s attention also to the ‘margins’ of the events, Activestills’ work displaces the photojournalist ‘decisive-moment’ paradigm and challenges the logic and economy of news consumption,” Shiraz Grinbaum and Vered Maimon state in the book’s introduction. Demonstrators stage a solidarity action with Khader Adnan, who embarked on a lengthy hunger strike to protest his detention by Israel without charge or trial, in the West Bank village of Bilin, February 2012. 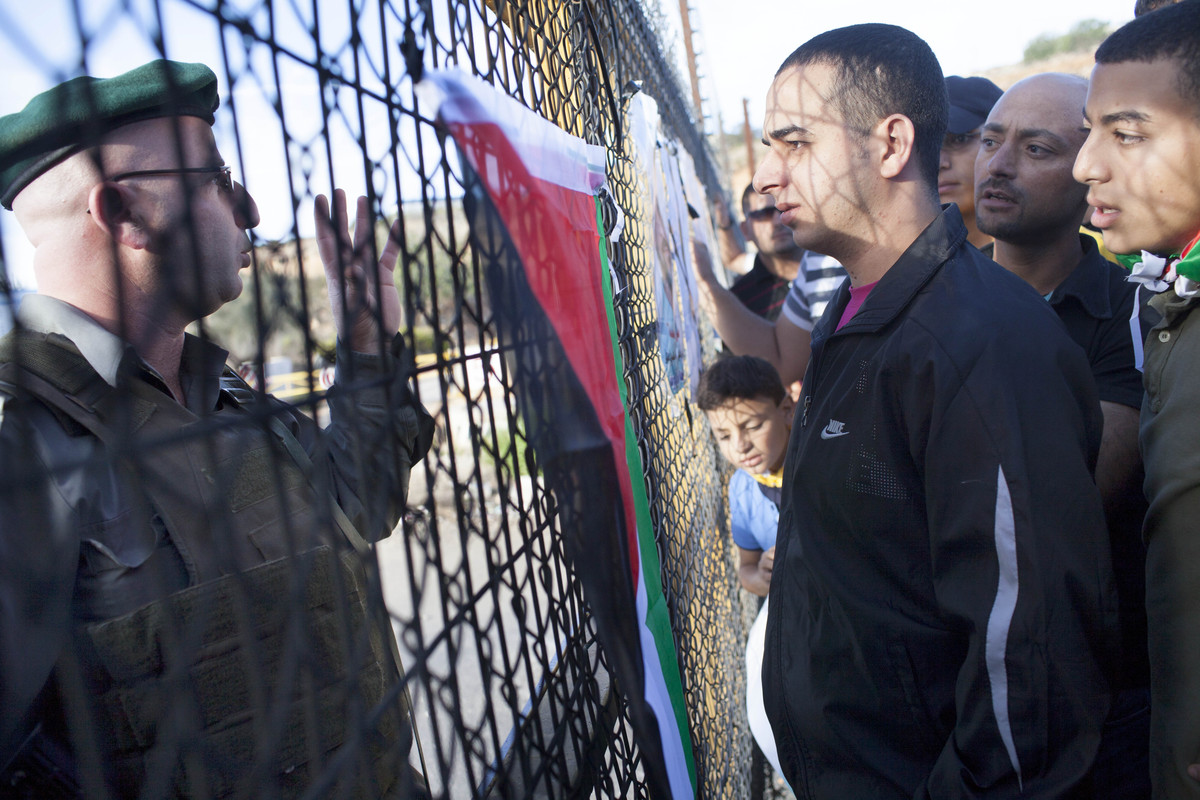 “Seeing themselves [photographers] as part of these struggles necessitated an ongoing coverage on a repetitive basis, which led to a strengthened relationship with the communities photographed and to the notion that the images belonged to them,” according to Grinbaum and Maimon. Palestinians await a prisoner exchange at Ofer military prison near the West Bank city of Ramallah, October 2011. 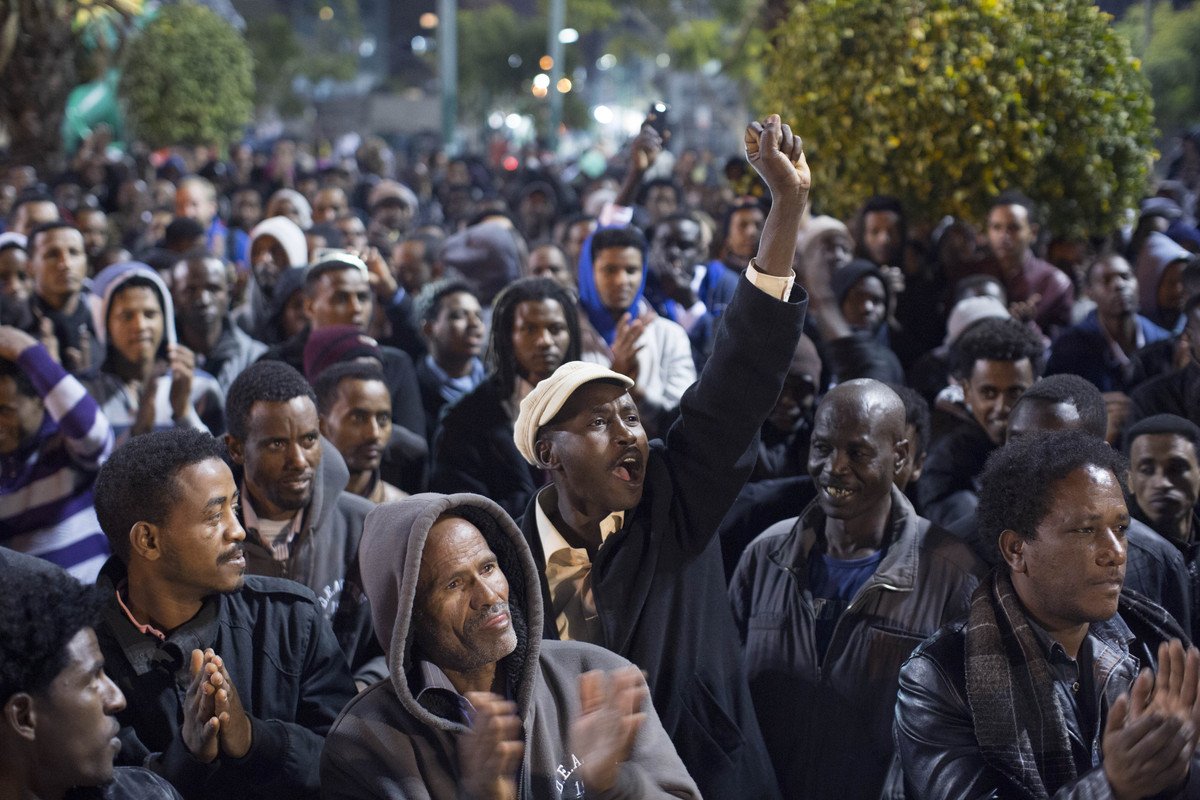 “I believe that the crux of Activestills’ contribution lies not only in their vigilant approach to testimony, but also and mainly in their sense of solidarity with their subjects,” writes photography theorist Meir Wigoder. African asylum seekers and their supporters gather in Levinsky Park, Tel Aviv, December 2013. 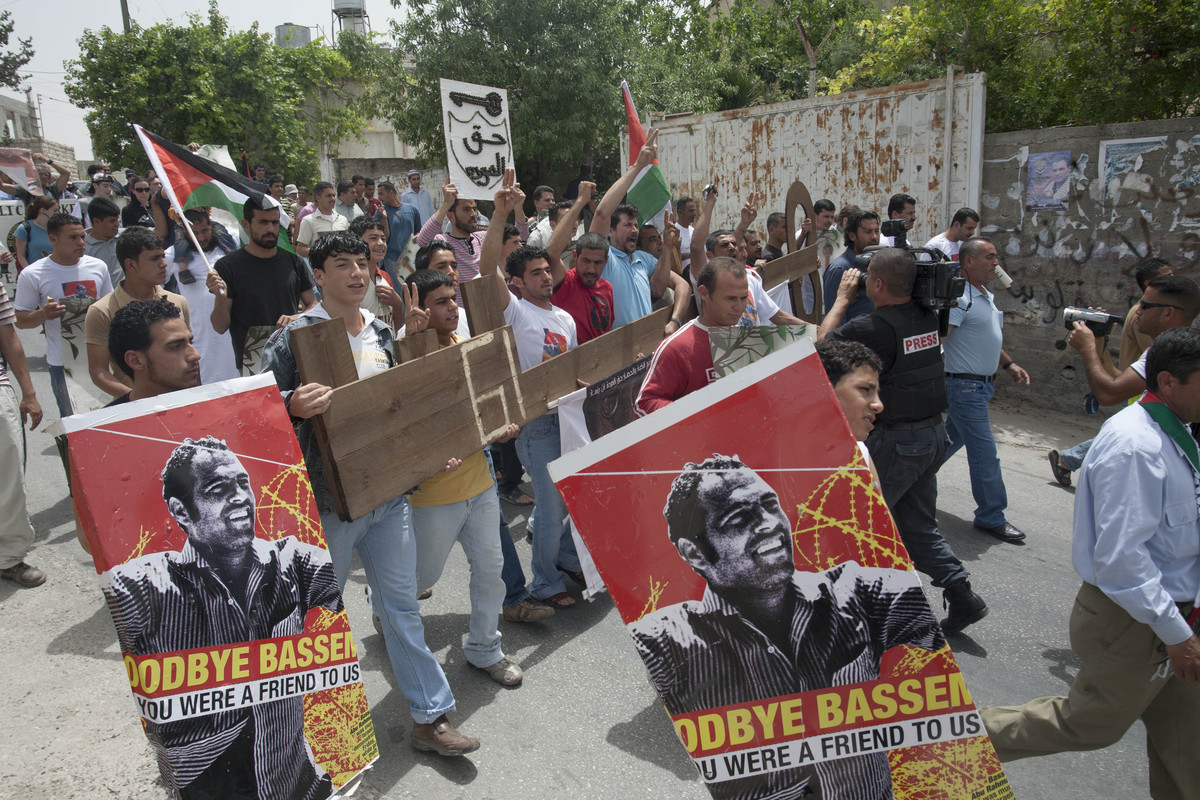 An Activestills photograph of Bassem Abu Rahmah flying a kite alongside Israel’s wall in the West Bank appears in a poster commemorating Abu Rahmah’s death after he was hit by a tear gas canister fired by an Israeli soldier in the village of Bilin. The poster was then hung outside his house and throughout the village as part of a memorial marking the site of his slaying, together with empty tear gas canisters. The image was later turned into a placard and a shield used to protect demonstrators from tear gas grenades fired by Israeli forces, Bilin, May 2009. 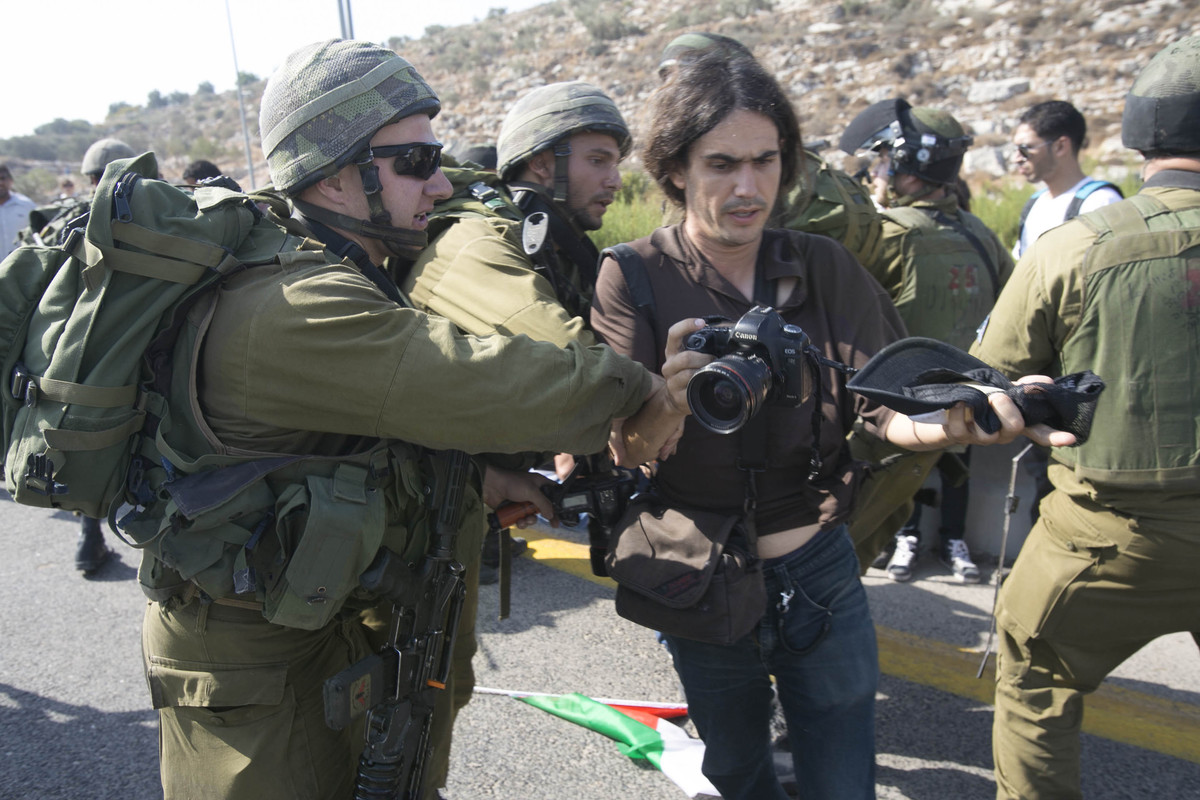 Israeli soldiers try to arrest Activestills photographer Oren Ziv during a protest against settler violence in the West Bank, October 2012. 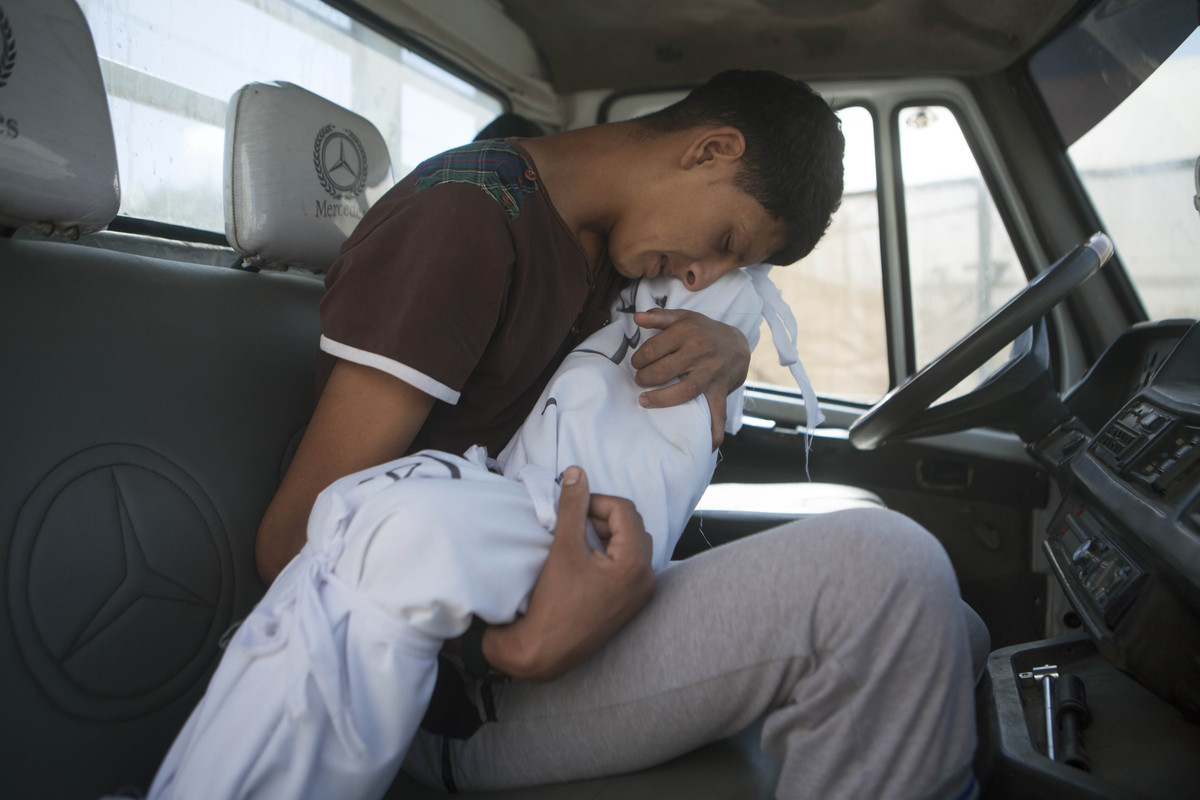 During Israel’s attacks on Gaza in the summer of 2014, Activestills photographer Anne Paq took this image. “The man, seated inside a truck, clings to a small body wrapped in a white sheet. Paq thought she was photographing a young father in mourning embracing his dead child, but after learning the names of the victims of the Israeli military operation, she understood that the child’s entire immediate family had been killed and that the man in the photograph was Mohammad Madi, the girl’s uncle whom Paq had seen and photographed that same day,” writes researcher and author Ruthie Ginsburg.