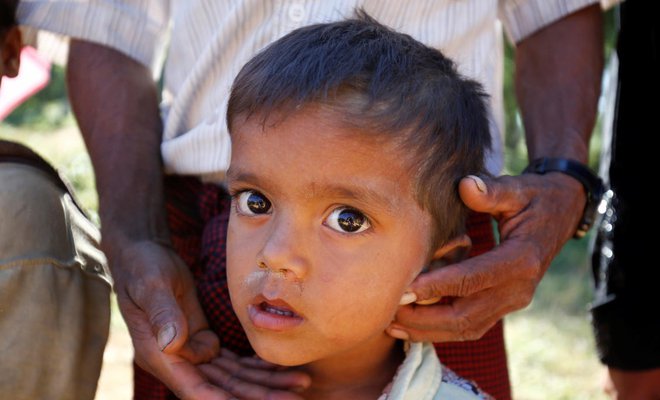 YANGON: Scores of Rohingya Muslims have been killed in a Myanmar army crackdown since early October, when sword-wielding assailants raided police posts in the remote marshlands bordering Bangladesh.
The military struck back with ground clearances, most recently backed by helicopter gunships.
Access to the conflict areas is heavily restricted, but witness testimony has seeped out alleging mass rapes, indiscriminate killings and the razing of entire Rohingya villages by Myanmar’s security forces — claims they deny.
It is the latest chapter in the grim recent history of the Rohingya, a one million population reviled across Myanmar as illegal immigrants and denied citizenship.
The following is a fact box on the Rohingya.
The Rohingya are a stateless Muslim ethnic group described by the United Nations as one of the world’s most persecuted minorities.
Using a dialect similar to that spoken in Chittagong in southeast Bangladesh, the Sunni Muslims are loathed by many in majority Buddhist Myanmar who see them as illegal immigrants and call them “Bengali” — even though many have lived in Myanmar for generations.
Most live in impoverished western Rakhine state, but are denied citizenship and smothered by restrictions on movement and work.
The UN refugee agency says well over 120,000 have fled Rakhine since religious violence in 2012 — an exodus that continues, despite the perils of the sea journey.
Last year, thousands were stranded at sea after a well-worn trafficking route through Thailand collapsed after the discovery of scores of shallow graves on the Malaysia border.
There are around 300,000 Rohingya living in Bangladesh’s southern coastal district bordering Myanmar, the vast majority of whom have fled Myanmar in recent decades.
Bangladesh recognizes only a small portion as refugees and regularly turns back those trying to cross the border.
On October 9 armed men ambushed border posts killing nine policeman and escaping with guns.
Security forces were sent in, vowing to repel the attacks. Nearly 30 civilians died in the ensuing clashes. That number has surged over the following weeks as troops clear remote villages.
The government says the attacks amount to an insurgency.
They accuse a previously unknown Pakistani Taliban-trained militant of leading the attacks and rallying hundreds of disgruntled Rohingya to his cause.
It is hard to verify those claims, although videos of armed men have emerged appearing to back them up. Security operations are ongoing.
The violence has revived calls from rights groups for Myanmar to recognize the Rohingya’s rights to citizenship and end their persecution.
Myanmar’s de facto leader Aung San Suu Kyi has been conspicuous for her near silence during the latest unrest.
Speaking on a trip to Japan last month the Nobel Peace Prize laureate vowed a thorough investigation into the violence but shied away from criticizing the military, who control all security matters.
She is also hampered by the politically incendiary nature of the issue in Myanmar.
The Rohingya are not officially recognized as an ethnic group, partly owing to a 1982 law stipulating that minorities must prove they lived in Myanmar prior to 1823 — before the first Anglo-Burmese war — to obtain nationality.