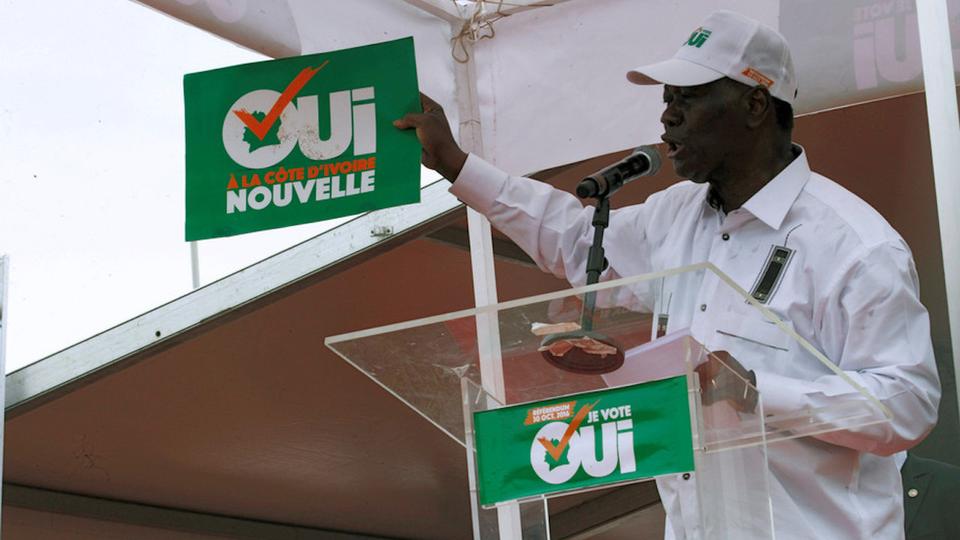 In May 2016 Côte d’Ivoire’s President Alassane Ouattara set up a committee of experts to propose a new constitution. This came after he had promised to reform the constitution during his 2015 presidential campaign.

The existing constitution from 2000 bars citizens who are not born to an Ivoirian mother and father to run for president. This became a political issue because at least one of Ouattara’s parents is Burkinabé by birth. The provision would have made it possible for the courts to exclude him from running for president.

The clause is included in the constitution as a result of a deal struck to end the country’s civil war, which begun in 2002 with a rebellion in northern regions. As part of the peace settlement the government of then-president Laurent Gbagbo, opposition parties and rebels signed a power-sharing agreement in France. The Linas-Marcoussis’ agreement (2003) removed the citizenship requirements from article 35 of constitution to allow Ouattara’s future candidacy. This was viewed as a temporary measure.

But Ouattara now argues that he is making the Linas-Marcoussis framework permanent. The new constitution he is proposing clarifies the extraconstitutional order that has been in place since 2003.

Nevertheless, opposition parties consistently refer to Ouattara’s election in 2010 and 2015 as illegitimate because he did not meet the citizenship and residency requirements for president. But, capitalising on support from northerners, many of whom have one or both parents from other countries, Ouattara aims to circumvent the opposition.

The broader concern about citizenship rights is important for northern regions, where Ouattara draws his strongest support. In addition, a significant portion of people living in Côte d’Ivoire are migrants.

The proposed constitution, which was tested through a referendum on Sunday, also includes the position of a vice-president, establishes a senate, and incorporates traditional leaders. On the face of it, it would seem good for post-conflict consolidation of constitutional principles.

Yet there was an effort by opposition leaders, including the Alliance of Democratic Forces, to boycott the referendum. One of the concerns is the absence of a broad-based consultative process. Another is the truncated timeline for Ivoirians to know and debate the proposed constitution. There was less than a month between its presentation to parliament and the referendum. The process may significantly taint the constitution at birth.

Article 35 of the current constitution, which deals with conditions for eligibility, will be replaced with Article 55. This allows presidential candidates with either both or one Ivoirian parent. It also eliminates strict residency requirements.

This is highly controversial and marks Ouattara’s broader programme to guarantee the citizenship of immigrants with at least one Ivoirian parent. Opponents suggest that this will strengthen the hand of immigrant communities which achieve citizenship by mixed nationality marriages. In effect, this would cement a growing constituency for Ouattara and his allies.

The proposed constitution maintains a two-term limit, which 85% of Ivoirians support, according to an Afrobarometer 2014 survey. It also lowers the minimum age for presidential candidates from 40 to 35.

The proposed Article 179 allows the president to appoint a vice-president. Opposition parties see this move as a constitutional “coup” that will protect Ouattara’s allies, mainly Guillaume Soro, president of the National Assembly.

They see this as an attempt to enshrine a succession plan in which Ouattara may step down before the end of his term and appoint Soro. There are also fears that establishing a vice-president’s post will lead to a greater centralisation of power. 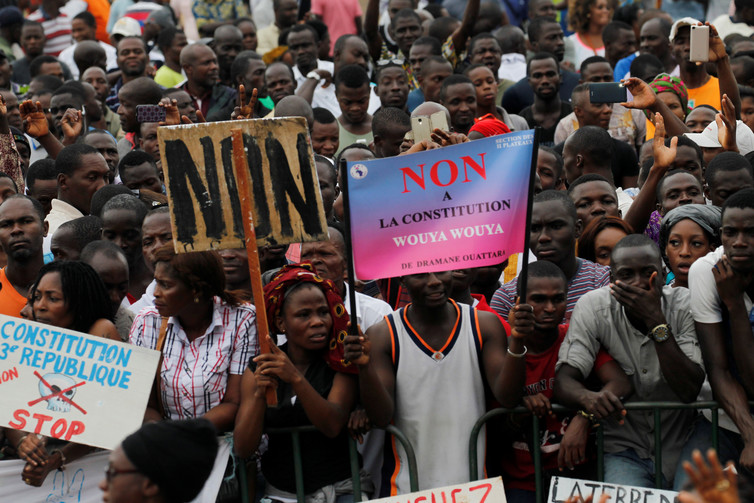 Ivorian opposition supporters protest during a rally ahead of the referendum in Abidjan. (Photo: Luc Gnago/Reuters)
In addition, there are fears that the proposed chamber will dilute parliament’s power and that this will open the door to more patronage positions. The proposed Article 87 establishes an upper house of parliament, a senate. One-third of senators will be directly appointed by the president. The remaining members will be elected.

The opposition believes that the appointed senators are likely to act favourably towards the president who appoints them. It would provide non-elected allies a path to Côte d’Ivoire’s representative body.

The ultimate effect may be a dilution of a representative parliament, which since 2001 has been largely without opposition representation. In addition, expecting some contestation for parliamentary elections in December 2016, this preemptive move to establish a senate could limit any representation that opposition may obtain.

The new constitution also includes a National House of Traditional Chiefs and Kings, which could further dilute the power of elected representatives.

A 2014 Afrobarometer survey provides some indicators about what Ivoirians expect from their political system and the protection of their rights.

It found that 48% of those surveyed believed that the country was either “not a democracy” or “a democracy, with major problems”. The majority (55%) were not satisfied with how democracy works in the country.

What stands out is that the vast majority – 82% – embraced the need to have a range of political parties in order to have choices. Yet, at the same time, 59% noted that opposition parties were silenced “always” or “often”.

The opposition is citing this, as well as a lack of broad-based citizen and opposition consultation, as a reason to boycott the constitutional referendum.

In late October a peaceful demonstration by opposition parties was dispersed by state security forces and opposition leaders Mamadou Koulibaly and Aboudramane Sangaré were arrested.

The protest was against the way in which the referendum was to be held and because it is being seen as an expedient plebiscite rather than a project owned by all Ivoirians.

The protesters were also calling attention to things that both the proposed and current constitution have not upheld in practice, mainly the freedoms of assembly and speech.

Prospects for the proposed constitution

There are already growing concerns about the legality of the constitution referendum process. Aside from the problems of consultation, Ouattara is implementing the constitutional referendum with two separated ballot questions instead of a single proposal.

This raises the likelihood that citizens may reconsider their position or become confused about the voting. It appears that Ouattara made this decision in violation of the electoral code, specifically article 37.

The Conversation
Abel Gbala, a Masters student in Communication for Development at the Université Félix Houphouët-Boigny, contributed to this article.