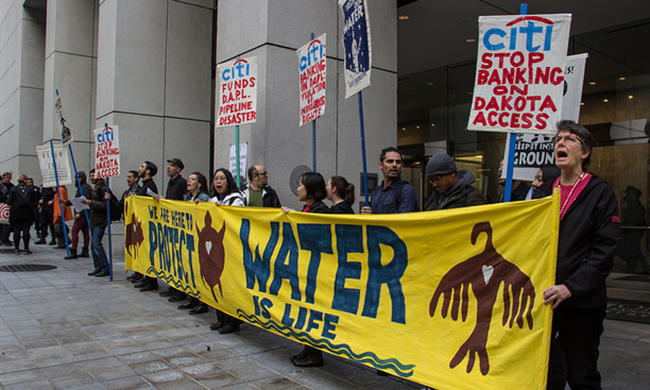 $460 million in credit is at stake for the Dakota Access and Bakken pipeline as Norway’s largest bank announces its own “fact-based” evaluation of indigenous rights abuses.

One of the major banks funding the Dakota Access and Bakken pipeline announced it may withhold its support over concerns for the treatment of the Standing Rock Sioux.

The bank, DNB, is Norway’s largest bank. It announced that it is now conducting its own “objective and fact-based” evaluation of how the Standing Rock Sioux’s rights are being treated. “If our initiative does not provide us with the necessary comfort,” announced Harald Serck-Hanssen, group executive vice president and head of Large Corporates and International in DNB, “DNB will evaluate its further participation in the financing of the project.”

DNB is one of a handful of banks out of a total 38 that has offered funding to all Energy Transfer entities, including direct loans to Dakota Access. Research shows that DNB bank loaned $120 million to the Bakken pipeline project and extended $460 million in credit lines to a handful of companies with ownership stakes, specifically Energy Transfer Partners, Sunoco Logistics, Phillips 66, and Marathon.

“It’s a testament to public pressure, and the strength of the native narrative, that the Norwegian bank is admitting to questioning its own involvement,” said Hugh MacMillan, the Food & Water Watch researcher who investigated and made public the names of the 38 banks funding the Bakken pipeline.

“We expect that Citigroup, Wells Fargo, TD Bank, Credit Suisse, and others are also uneasy. It’s important to know that Dakota Access is just the tip of the iceberg for many of these banks, when it comes to sinking billions on maximizing U.S. production of oil and gas, in spite of climate science,” MacMillan said.

The statement from DNB, released Nov. 6, said: “DNB is concerned about how the situation surrounding the oil pipeline in North Dakota has developed. The bank will therefore use its position as lender to the project to encourage a more constructive process to find solutions.”

“We expect the companies and the responsible authorities to take a serious view of the situation,” it said.

The bank’s announcement comes nearly two months after an investigation by Food & Water Watch made public the 38 banks backing the controversial Dakota Access/Bakken pipeline. In the weeks following, YES! Magazine published the names and contact information of each bank’s CEO.  Hundreds of thousands of people shared the article on Facebook, and it was reprinted widely in other media outlets, creating an organized phone and email campaign to protest the banks’ involvement. Around the nation, direct action campaigns at bank branches and headquarters have ranged from picketing to civil disobedience ending with arrests.

The Standing Rock controversy recently intensified as nearly 4,000 people have gathered in North Dakota to help the Standing Rock Sioux protect the area from pipeline construction. The pipeline is nearing the stage at which it would pass under the Missouri River, a drinking water supply for 18 million people.

Two weeks ago, as pipeline construction deadlines neared, the county sheriff organized militarized police from seven different states to confront the people there. The violence against unarmed protesters and the destruction of the camp on Oct. 27 has been replayed on Facebook feeds and network news ever since, intensifying public opposition.

The Bakken pipeline includes the 1,170-mile Dakota Access pipeline plus a 700-mile pipeline from the end of the Dakota Access, in Illinois, to refineries and export facilities in Texas.