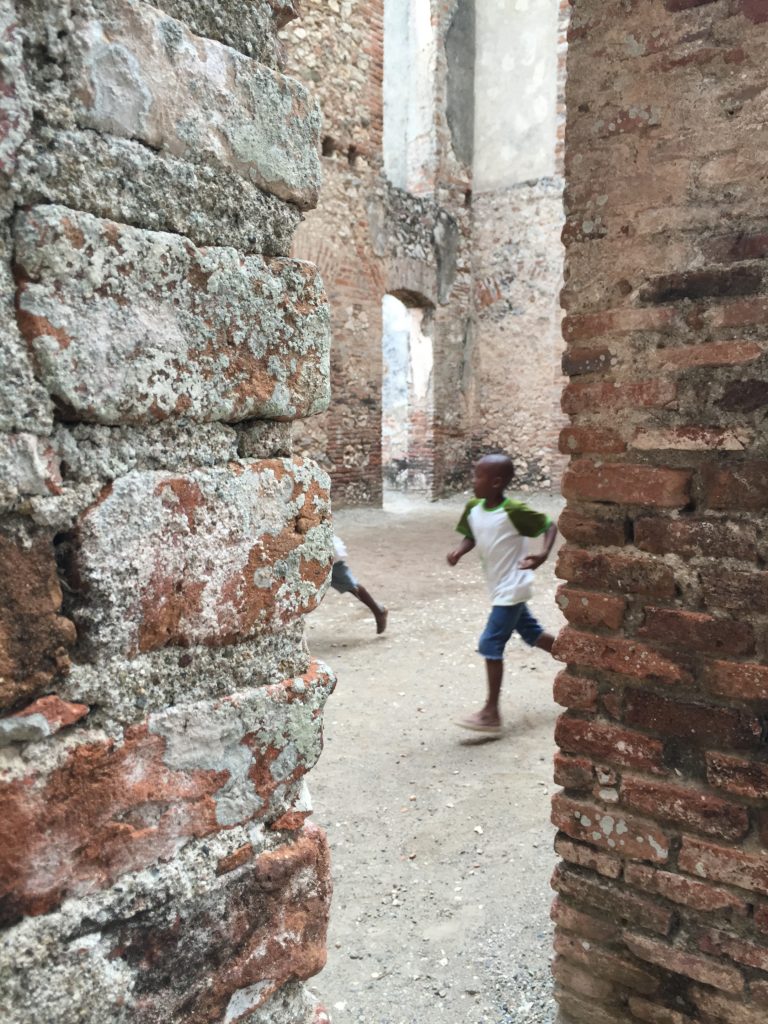 A football game in session in Sans Souci Palace in Haiti, in the room where King Henri Christophe is supposed to have killed himself. Residents of the surrounding community of Milot enjoy unfettered access to the 209-year-old palace. PHOTO: Georgia Popplewell. Used with permission.
By Lillian Guerra

Over the years, I have had dozens of conversations on the question of whether Caribbean history “really matters” and for whom it matters. I’ve heard the region’s history dismissed due to the relative size of Caribbean societies, historians’ supposedly excessive preoccupation with slavery, and a questioning of what lessons can be learned from such allegedly dysfunctional societies.

One particularly memorable encounter took place at a fund-raising event for Haiti. Swirling his cocktail, a surgeon asked if I could explain the “erratic behavior” of the Haitians who greeted him when his US medical team arrived at a temporary field hospital after the 2010 earthquake. Much of the Haitian staff, he remarked, “suddenly disappeared,” leaving the American doctors to fend for themselves. When I suggested that the Haitian staff had probably departed because they had been on duty around the clock for days before his team’s arrival, the doctor seemed not to hear me: “I think they resented us because they believe we are somehow responsible for slavery. But slavery ended in Haiti two centuries ago. Is there really anyone in Haiti today who can remember slavery?” To his obvious amazement, I replied, “Yes, actually, you would be hard pressed to find someone in Haiti who doesn’t remember slavery.”

This otherwise liberal-leaning physician’s inability to grasp the reality of Haiti was matched only by his lack of reflection on how the Caribbean’s history shaped his own position in society. We who live in the United States—regardless of our class or our color—enjoy a wide array of historically accumulated advantages that Haitians and other people of the Caribbean do not. So while we have the luxury of forgetting, everyone in the Caribbean “remembers” slavery because they experience on a daily basis a wide array of historically accumulated disadvantages.

I was not surprised by this conversation. But I have been surprised by numerous colleagues who worried about what my focus on the Caribbean, and Cuba in particular, meant for my career. Many Latin Americanists suggested I choose a “bigger country” after my dissertation. Several department chairs have remarked that aside from slavery and the colonial origins of poverty, Caribbean history had little to offer in terms of “the weightier questions in the field.” In fact, just as I began the manuscript for a new book on 1960s Cuba, a particularly demoralizing colleague went as far as to say that even the study of the Cuban Revolution was “passé.”

Caribbean history matters for the same reason everyone in the Caribbean “remembers” slavery: the legacies of slavery, imperialism, and historical responses to it are, in the Caribbean, immediately evident in all the “weightier” concepts we associate with modernity: notions of citizenship, individual freedom, collective liberation, and nation. Caribbean history is not merely about the “colonial origins of poverty”; it addresses the most fundamental questions of who we are, what we believe, and how we got that way. Yet the uncomfortable facts of Caribbean history rarely make it into the consciousness of even the most educated of our society’s elite.

Take Haiti as an example. In 1804, Haiti was host to the first successful slave revolt in the history of the world and the first and only country to identify itself as “black.” Thanks to Haiti, blackness emerged as something other than a color marking inferiority; it became a banner for unity and mobilization around a common project of freedom and equality that defied racial and economic injustice worldwide. Haiti changed everything by questioning what nearly everyone in the European and European-dominated world took for granted. The history of freedom in America arguably began not with slave owners like Thomas Jefferson and George Washington, who called for a limited, racialized vision of anti-imperialist freedom, but in the Caribbean with the revolution in Haiti and with broader struggles for freedom from colonialism (which continued with the emergence of 20th-century US colonialism). 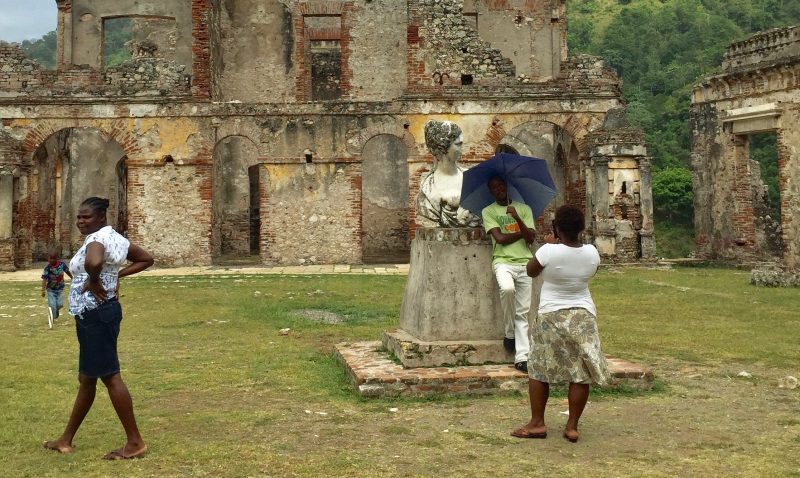 Residents of the surrounding community of Milot enjoy unfettered access to Haiti’s 209-year old Palais Sans Souci. PHOTO: Georgia Popplewell. Used with permission.
While countries of the Caribbean may be geographically tiny, their impact on the development of global economies and political thought has been fundamental. Just as Haiti was the first country to embrace blackness as an ideological position promoting true freedom and the right of self-determination, the people of the British West Indies were the first in the 20th century to invite people of the African diaspora to unite in pan-ethnic liberation movements. These ultimately included Garveyism, Rastafarianism, and the US civil rights movement. Without José Martí, Antonio Maceo, Evaristo Estenoz, Marcus Garvey, Luisa Capetillo, Franz Fanon, Aimé Cesaire, Walter Rodney, José Peña Gómez, Sonia Pierre, Stokely Carmichael, Jamaica Kincaid, and Bob Marley, societies everywhere would likely have never challenged, let alone defeated, the values of inequality, exclusion, hierarchy, and Eurocentrism as successfully as they did.

The work of these individuals and the persistent protest of so many millions of anonymous Caribbeans have redefined global struggles and the way we think about them. While the reality of Caribbean societies’ efforts to subvert colonialism and its legacies has perhaps never completely fulfilled the dream of just, democratic change, even the most controversial of these efforts altered the course of world history. They shifted the balance of power between elites and the poor, and transformed the political landscape of what even the most marginalized people in the world can expect—not only from their own governments but from that of the United States.

There is no better example than Cuba. Whatever we may think of Fidel Castro, the dictatorship that the Revolution undoubtedly became, and its long-term results, in 1959, symbolically and practically, the Cuban Revolution attacked and subverted the fundamental “right” the United States had exerted over the Caribbean and Latin America for close to 100 years: the right to interrupt local political processes, define the limits of what states could do for their citizens, and control the economy in ways that put US business interests above the interests of the majority of Caribbean and Latin American citizens.

Cuba also made many Americans in the United States aware, for the first time, of the nature of 20th-century US interventions in Latin America—that is, of their own history. In history and other disciplines, Cuba catalyzed radical changes in how scholars conceived the fundamental building blocks of US power abroad, especially the role that myths of US exceptionalism and democracy played in justifying government policies and their results to the US public. The Cuban Revolution also forced scholars to unravel the central paradox that defined and united the political histories of large swaths of the Caribbean including Puerto Rico, the Dominican Republic, Haiti, and Cuba to the United States.

This paradox can be found in the contradiction between what the United States says it believes versus what the United States has actually done historically to promote its values abroad: consecutive US administrations from McKinley to Obama have crafted foreign policies promising to promote the growth of political democracy and a fair capitalist system based on a “level playing field.” Yet we have mostly promoted this mission through the antitheses of democracy and fair capitalist competition: repeated US military occupations, violations of sovereignty, and training of surrogate armies to ensure US business interests. The study of the Caribbean today might be more relevant than ever as it reveals the limits of US power and the limits that liberation can take when crafted in opposition to US power.

Like Haiti, Cuba’s historic precedent forced a global reconsideration and questioning of everything that the world’s elites once took for granted. And like Haiti in the 19th century, Cuba became a hemispheric pariah.

Slavery is also a living memory in the Caribbean because its greatest legacy is still with us—a legacy that is mostly invisible and yet resides in the clothes we wear and probably much of the food we eat. Before the mass production by slaves of stimulants like sugar, coffee, tobacco, and chocolate, people had never had the experience of consuming a commodity on a daily basis whose production process was “invisible.” For hundreds of years, Europeans ate sugar every day, never stopping to think that the cost of producing the sugar was human life. Pleasure justified the enslavement of nine million human beings and the wholesale destruction of African cultures, political systems, and lives.

Today, the invisibility of the labor that goes into the production of consumer goods is probably one of the greatest legacies of slavery. We don’t think about the age of the person who made our tennis shoes in Nicaragua or the average hourly wage of the woman in the Dominican Republic who stitched our shirts together for the same reason that European and North American consumers never bothered to question the source of the labor that went into making their sugar—it was just easier not to.

Knowing about injustice often means doing something to change it, and so, more often than not, people decide they would rather not know. Ignorance continues to be the benefit and the bliss of privilege. History should continue to work against it.

This essay was originally published in the March 2014 edition of Perspectives on History. It is republished here under a Creative Commons ttribution-NonCommercial-NoDerivatives 4.0 International (CC BY-NC-ND 4.0) licence.