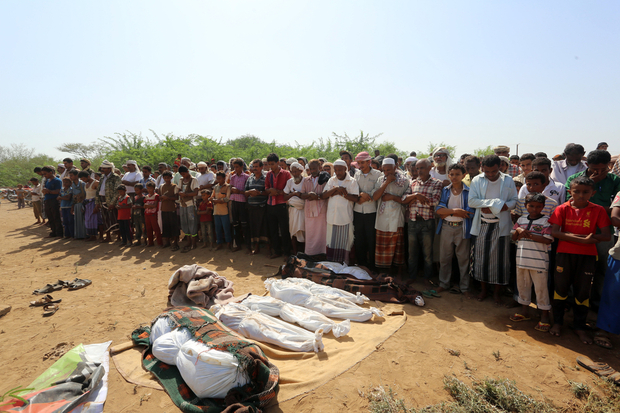 The United States, Britain and the UN peace envoy to Yemen on Sunday urged the warring parties in the country’s civil war to declare a ceasefire they said could start within days.

The United Nations envoy, Ismail Ould Cheikh Ahmed, said: “We are here to call for an immediate cessation of hostilities, which will be declared in the next few hours.”

Cheikh Ahmed said he had been in contact with the rebel Houthi militia’s lead negotiator and with Yemeni President Abedrabbo Mansour Hadi’s government.

But he also warned that he hoped for “clearer plans” for a ceasefire in coming days.

US Secretary of State John Kerry would not predict whether Yemen’s government or rebel forces had accepted the demand, but said the diplomats were not operating “in a vacuum”.

“This is the time to implement a ceasefire unconditionally and then move to the negotiating table,” Kerry told reporters.

Kerry was speaking after meeting Cheikh Ahmed and his opposite numbers from Britain, Saudi Arabia and the United Arab Emirates at talks hosted by Britain in London.

The senior envoys, he said, had been in touch with Hadi’s Saudi-backed government and with the Iranian-sponsored Houthi rebels who drove him from the country to push for peace.

“We cannot emphasise enough today the urgency of ending the violence in Yemen,” Kerry said.

Johnson agreed, saying: “The fatalities that we’re seeing there are unacceptable. There should be a ceasefire and the UN should lead the way in calling for that ceasefire.”

The diplomatic push came amid signs that a renewed peace process may be at hand.

A Saudi-led coalition intervened in March 2015 in support of Hadi’s internationally-recognised government after it was forced to flee as Houthi rebels seized the capital.

The coalition has carried out hundreds of air strikes and provided ground troops to support Hadi’s forces.

But it has failed to dislodge the Houthi rebels, who are allied with forces loyal to ex-president Ali Abdullah Saleh, from key areas including the capital Sanaa.

The rebels still control large parts of the north, their historic stronghold areas, and other regions of western and central Yemen.

Government forces have recaptured the south and east but failed to make any significant advances.

The conflict has killed almost 6,900 people, wounded more than 35,000 and displaced at least three million since March last year, according to the United Nations.

Civilians have paid the heaviest price in an increasingly dire humanitarian crisis.

One of the deadliest coalition attacks came on 8 October when an air raid on a funeral ceremony killed 140 people and wounded 525 others.

Washington, which along with Britain provides logistical support to Saudi-led efforts, was angry at its ally’s blunder and renewed calls for a truce.