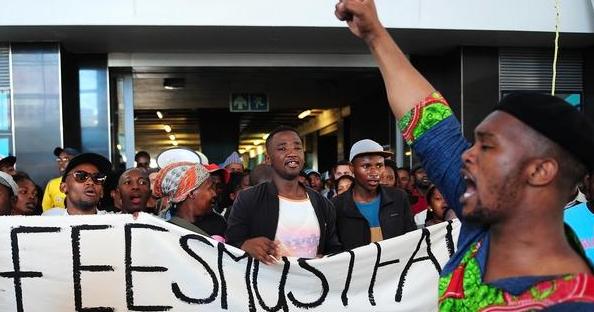 South African student protesters and police clashed in renewed violence in Johannesburg on Monday as attempts to re-open the top-tier Wits University descended into running battles on campus.

Protesters throwing rocks were dispersed by riot police using tear gas, rubber bullets and stun grenades as pressure ratchets up on campuses across the country over tuition fees.

Unrest has erupted repeatedly at South African universities in recent months, with Wits and other institutions forced to close temporarily over the last three weeks.

“The students started throwing sizeable rocks that could have maimed or killed people,” Wits said in a statement after trying to re-open Monday.

“Police dispersed the crowd using stun grenades, tear gas and water cannons. Two arrests were made this morning and some minor injuries have been reported.”

The violence, which also involved campus security guards, focused outside Wits’ Great Hall auditorium, the scene of several recent clashes, and later spread into the city streets outside.

Student leaders said they had warned authorities that resuming lectures on Monday would result in another bout of clashes.

“We pleaded with the council of the university in the early hours of this morning to close down the academic programme and call off the police,” said Wits student representative Fasiha Hassan. “If they had called off police, we wouldn’t be in this situation. There was no need for them to open fire.”

University tuition fees – which are set to be increased – have become a flashpoint for protests in South Africa, which has struggled to provide education, jobs and housing for many poor black people since the end of apartheid in 1994.

The government has vowed to help all students from poorer families over the fees, but the protesters are demanding free education.

“Essentially what they are saying is if there is no free education, there should be no education at all,” Wits rector Adam Habib said last week, adding that the whole 2016 academic year could be lost.

University authorities say many students want to return to class and that the protests do not represent the majority of undergraduates.

President Jacob Zuma has said he supports introducing free education, but has condemned protesters who forced universities to shut down or who vandalised campuses.

On Monday, demonstrations were also reported on campuses in Pretoria, Bloemfontein and Pietermaritzburg.

National police chief Khomotso Phahlane said that officers had acted with restraint. “It is extremely concerning that criminality has taken place at some universities, leaving the police with no choice but to respond with a degree of force in order to stabilise the situation,” he said.

“Protesting students have disrupted classes and traffic and pelted police with stones, flooded premises with water from fire hoses and discharged fire extinguishers and overturned vehicles.”

Universities in Pretoria, Cape Town and Durban have also been hit by protests and closures.

Last year, students – many of them so-called “born frees” who grew up after apartheid – staged a series of huge demonstrations which forced the government to abandon planned fee hikes for 2016.