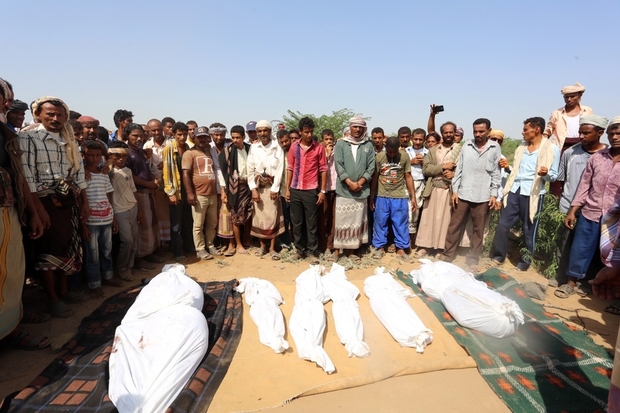 The Saudi-led coalition fighting rebels in Yemen said on Sunday it will investigate an air raid that killed more than 140 people, after Washington announced it was reviewing support for the alliance.

The Houthi rebels have blamed the Arab coalition for Saturday’s attack, one of the deadliest since it launched a military campaign against the rebels in March last year.

The attack could further sour US-Saudi ties already strained over the coalition’s military intervention, which is suspected of causing almost half of the more than 4,000 civilian deaths in Yemen’s conflict.

After initially denying any responsibility, the coalition said it was ready to launch an inquiry into the “regrettable and painful” strike, which the UN said also wounded more than 525 people.
“The coalition is also willing to provide the investigation team with any data and information related to its military operations today, at the incident’s location and the surrounding areas,” it said.

The UN said aid workers were “shocked and outraged” by the attack that hit a community hall in Sanaa where mourners had gathered.

The Houthi-controlled news site sabanews.net said coalition planes hit after hundreds had gathered to mourn the death of the father of rebel interior minister Jalal al-Rowaishan and denounced the “massacre”.

The Houthis did not say if Rowaishan was present in the building at the time of the attack, nor did they indicate if other senior figures were attending the funeral.

But Sanaa mayor Abdel Qader Hilal was among those killed, according to the rebels’ Almasirah television.

Thousands of Yemenis also took to the streets to protest outside the UN headquarters chanting against the Saudi royal family in a rally dubbed the “volcano of rage”.

According to ARY News, prominent rebel Mohammed Ali al-Houthi told the crowd: “After this massacre, we are more determined to confront the assailants.”

He also said:  “Open the fronts with the Saudi enemy immediately.”

Riyadh’s key ally Washington warned it had launched an “immediate review” of support to the Arab coalition.

“We are deeply disturbed by reports of today’s air strike on a funeral hall in Yemen, which, if confirmed, would continue the troubling series of attacks striking Yemeni civilians,” White House National Security Council spokesman Ned Price said in a statement.

“In light of this and other recent incidents, we have initiated an immediate review of our already significantly reduced support to the Saudi-led coalition and are prepared to adjust our support so as to better align with US principles, values and interests.”

Price stressed that “US security cooperation with Saudi Arabia is not a blank cheque,” and called on all sides to implement an “immediate” ceasefire.

The latest attack has renewed calls for British and US arms sales to Saudi Arabia to be halted in light of its campaign in Yemen.

A Yemeni officer confirmed a bomb fragment found in the funeral hall by ITN news had in fact been US-made.

In August, the US military announced it had slashed its number of intelligence advisers supporting the coalition following concerns over civilian casualties.

UN humanitarian coordinator in Yemen, Jamie McGoldrick, called for an immediate investigation into the funeral strike and said the international community must exert pressure to ensure civilians are protected.

“This violence against civilians in Yemen must stop immediately,” said McGoldrick.

A “horrified and extremely disturbed” UN Under-Secretary-General for Humanitarian Affairs and Emergency Relief Coordinator Stephen O’Brien called for a prompt and “impartial” probe.

“I also call on all parties to protect civilians and stop using explosive weapons or conducting aerial bombardments in civilian-populated places in Yemen. Surely enough is enough,” he added.

The Saudi-led coalition has come under increasing international scrutiny over civilian deaths.

In September 2015, a suspected coalition air strike killed at least 131 civilians at a wedding near the Red Sea city of Mokha.

The Saudi-led alliance denied any involvement.

In March this year, Saudi-led air strikes on a market killed at least 119 people, including 106 civilians, of which 24 were children, in the northern rebel-held province of Hajja.

On Saturday, emergency workers pulled out at least 20 charred remains and body parts from the gutted building in southern Sanaa as others scoured the wreckage for survivors.

Some of the wounded had their legs torn off and were treated on the spot by volunteers.

In an initial statement to AFP, the Saudi-led coalition said it had no operations at the location and “other causes” for the incident must be considered.

The coalition “has in the past avoided such gatherings and [they] have never been a subject of targeting,” it said.

In its latest statement, however, the coalition expressed its “deepest condolences and support to the families of the victims of hostilities since the coup takeover of power in Yemen during 2014”.

The coalition – which also comprises Bahrain, Egypt, Morocco, Qatar, Sudan and the United Arab Emirates – has faced repeated criticism from rights groups over civilian casualties in its campaign in Yemen.

The Houthis swept into Sanaa in September 2014 and advanced across much of Yemen, forcing the internationally recognised government of President Abd Rabbuh Mansour Hadi to flee.

The conflict has killed more than 6,700 people, almost two-thirds of them civilians, and displaced at least three million since the coalition launched military operations, according to the United Nations.

UN rights office spokesman Rupert Colville said Tuesday that from March 2015 through 30 September, 4,014 civilians had died and nearly 7,000 had been injured.