‘Like doctors in a war’: inside Venezuela’s healthcare crisis 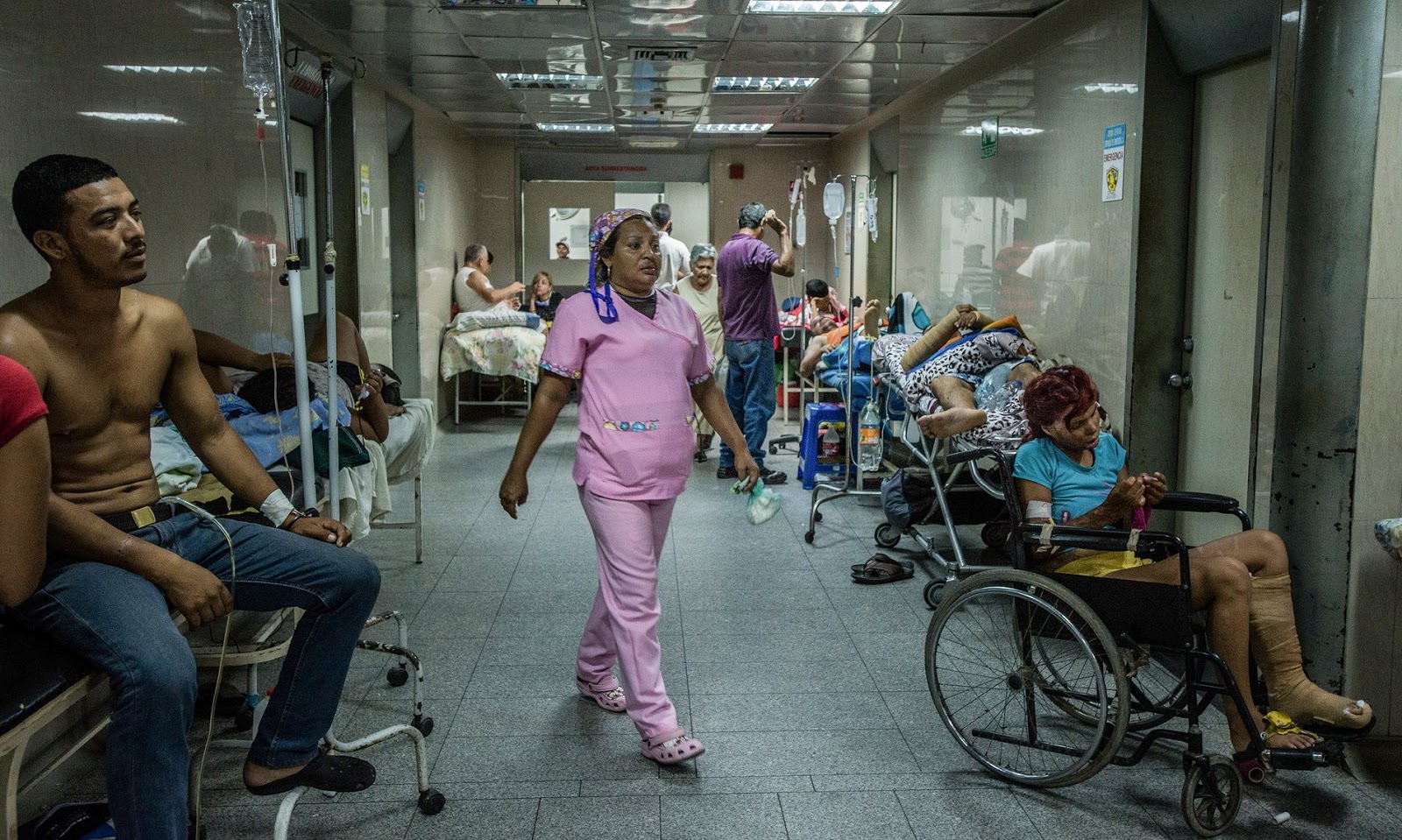 Dr María Gonzales cannot recall the exact moment when she realised Venezuela’s health crisis had enveloped her hospital, the Luis Razetti in the Caribbean coastal city of Barcelona.

It may have been during a surge in cases of scabies, a skin infection that ought to be easily prevented with soap, water and disinfectant. It could have been her first sight of an emaciated child, something she had only previously seen in medical books or documentaries about famines in Africa. Or perhaps it was when she found herself prescribing a 40-minute cold shower because the pharmacy had run out of anti-fever drugs.

But the severity of the situation was certainly clear earlier this month, when a patient came in with a suspected case of diphtheria – a disease that Venezuela was supposed to have eradicated more than 20 years ago.

“It’s like we have returned to the last century,” she says. “Everything is going backwards.”

The refrain is increasingly common among medical professionals in Venezuela, where acute shortages of food, drugs and sanitary products threaten to reverse decades of health gains.

Despite its immense oil wealth, the country is in the midst of devastating economic, social and health crises. It has the world’s steepest economic decline, the second highest murder rate and the sharpest-rising inflation (forecast to reach 2,200% by the end of next year, according to the International Monetary Fund).

These problems all converge in the nation’s hospitals, where doctors report rising levels of mortality thanks to a dire shortage of medical supplies, shutdowns of operating theatres, staff declines and violent crime, including gunshots during surgery and mugging in corridors.

For years, among the proudest boasts of the Bolivarian Socialist administration was that it eradicated hunger, reduced poverty and improved healthcare for the poor.

But the trend now appears to be moving in the opposite direction at an alarming speed. Reliable data is hard to find. The government has acknowledged that maternal mortality – a key healthcare indicator – has doubled in the past year. The opposition says the deterioration is five-fold – and that death of newborns increased 100-fold.

The Venezuelan Health Observatory, a research centre at the Central University of Venezuela in Caracas, estimates that fewer than 10% of operating theatres, emergency rooms and intensive care units are fully operational. It says 76% of hospitals suffer from scarcity of medicines, 81% have a lack of surgical materials and 70% complain of intermittent water supply.

“We are seeing a collapse in the public health system.” said Maritza Landaeta, a senior member of the Health Observatory. “Venezuela is witnessing a miracle, a miracle of destruction.” 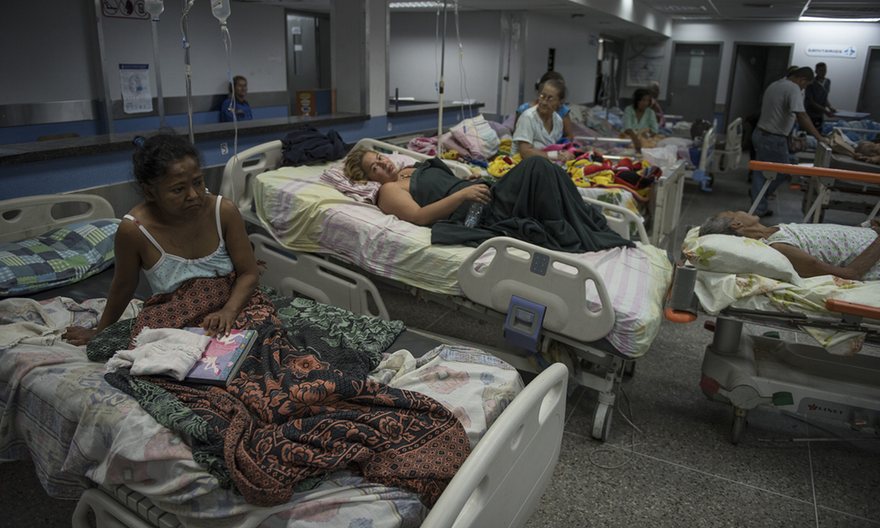 Her concerns were echoed by 10 physicians interviewed in three cities across the country. Without exception, they expressed alarm and anger at the deterioration they see.

“Sometimes I cry. It is so frustrating,” said Carlos Menezes, who recently qualified as a doctor after training at Luis Razetti. “People are dying because of this crisis.”

Menezes, and every staff member interviewed at Luis Razetti, asked to be identified with a pseudonym for fear of repercussions in the current tense climate. Earlier this year, the president of the Venezuelan Association of Clinics and Hospitals in the state of Carabobo, was detained by police and questioned for three hours after he went on TV to complain about medical shortages.

Two doctors smuggled the Guardian past security guards for a tour of their hospital, where the scale of deterioration was evident.

In the basement, the radiography room was permanently closed; patients were sleeping on dirty beds in the corridors. On the ground floor, doctors were staging a protest over shortages of drugs and medical equipment. In the second-floor trauma ward, some patients have been waiting for six months to have bones reset because there are no rods, pins and plates. In the paediatric ward, impoverished mothers of malnourished children were soliciting donations of food and medicine that the hospital could not provide.

The eighth-floor psychiatric ward was perhaps the most disturbing. “We have zero psych drugs so instead we use sedatives. The patients have been sedated for the past three months,” said Pablo Álvarez, another doctor at the hospital. “This is extremely bad because their pathologies are worsening the entire time and we are just masking the symptoms. The damage is irreversible.”

Luis Razetti is supposed to be the anchor hospital of the entire eastern region. As a level four medical institution, it should be able to deal with every form of treatment. The reality, however, is that it can barely cope with many of the basics.

In the orthopaedic department, there are no weights for traction devices, so nurses used Coke and Pepsi bottles filled with water. Two dangle at the foot of the bed of Daniel Usman, whose femur was broken in a gang shootout. He says has been waiting two months for surgery because the blood bank does not have his type. Considered a suspect, he is permanently handcuffed to the hospital bed and has to buy his own painkillers.

Staff say they have to reuse surgical gloves unless patients bring their own. There used to be six working radiotherapy machines; now there are none. Of the 10 operating theatres, only two are in use, though only sporadically because it is often hard to find anaesthetics. The air conditioning is out of order. Only one lift works. The x-ray is functioning, but there there are no printing materials, so doctors have to diagnose and operate based on mobile phone photos of the screen.

“We have to improvise like doctors in a war,” says Álvarez who has been at the institution for more than five years.

The battlefield analogy is made all the more appropriate by the ever-present fear of violence: staff and patients have been mugged in the hospital corridors. Five of the 10 doctors interviewed by the Guardian reported receiving death threats.

“The insecurity in the hospital is worse than outside,” said one. “Gangs have entered during surgery and started shooting. They said if the patient cannot be saved, then we will be killed,” said another. “Two months ago, I was threatened with a grenade,” says a third.

But this pales in comparison to the dangers faced by the most seriously ill patients: children who cannot get adequate food, or cancer patients who are unable to get the appropriate chemotherapy treatments.

Nationwide, the Health Observatory believes malnutrition is the biggest worry, causing 29 child deaths every day and stunting of 35% of poor rural infants.

Until recently, the hospital in Barcelona only had a few cases of kwashiorkor (a deficiency of proteins, which leads to distended stomachs), but now for the first time, they are also seeing children with the more serious marasmus (starvation that causes emaciation and diarrhoea).

“It has become much worse in the past year. I have seen about 20 cases of marasmus in the last few months. We are also seeing dozens of cases of extreme weight loss,” said Álvarez.

Doctors have also accused the government of downplaying the threat of the Zika virus. While neighbouring Brazil and Colombia publish weekly updates of confirmed cases, President Nicolás Maduro has largely kept quiet about the virus. And while other countries in Latin America have reported hundreds of cases of Zika-related microcephaly, Venezuela has not acknowledged a single one.

Diphtheria is making a comeback, although Venezuela had been the first country in Latin America to eradicate the disease. The first few fatalities from the disease were confirmed in Bolívar state earlier this month. Since then, there have been between 17 and 22 deaths, according to local media. Another suspected case is under observation in Luis Razetti. 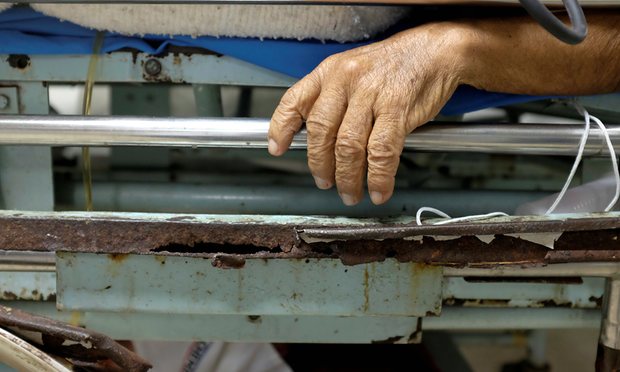 A patient at a hospital in Mérida, Venezuela. Photograph: Marco Bello/Reuters
The situation is only a little better in Caracas. Thanks to its charitable foundation, the José Manuel de los Ríos hospital is one of the best-resourced medical institutions in the country, but it is also chronically short of drugs, staff and equipment.

Since 2005, the number of paediatricians is down from 10 to three, oncologists down from eight to four and there are 30% fewer nurses

Augusto Pereira, the head of the oncology department, said the mortality rate of patients had increased 5% in the past year. Infection rates are also creeping up due to shortages of staff, medicine and sterilisation equipment. Only one elevator is working. Two cats wander the corridors.

“Technically, our hospital should be closed. In other countries, we would be shut down. But in Venezuela, we are the best,” Pereira says.

Due to a shortage of anaesthetists and operating theatres, there are only 15 to 20 paediatric operations a month, down from 100 in the past. Doctors are forced to argue with one another whose patients deserve priority.

“People are dying every day because of the delays,” said paediatrician Alejandro Ferrer. “We have to wait until the patients get enough money for the examinations, then we do the diagnosis, then we have to wait for at least three weeks for an chance to do surgery. If you delay the treatment of a cancer patient, they are going to die.”

Others suffer a collapse in quality of life. Fifteen-year old Jaidiluz Pastrana was born with neurological problems, severe spina bifida and a cleft palate and is also now suffering hypertension and urinary infection because the hospital has run out of diuretics and catheters. “I’ve lost count of how many drug stores I have been to in the past week, but there is nothing,” her mother Luzmery Hurtade laments. “A year ago, I could have found what I needed, but not now.”

Her daughter shares a room with José García, a five-week-old baby who has meningitis, hypertension, asthma, allergies and convulsions. The infant’s mother, Ana Blanco has a thick wad of prescriptions from the doctors to treat these ailments, but the hospital can provide nothing but a bed.

“I’ve spent more than a month looking for medicine. The doctor says it is important, but I can’t get it,” she says.

The public security problem has added to her woes. The previous Saturday, she was robbed at gunpoint outside the hospital on her way to a pharmacy. The assailant stole 6,000 bolivares, equivalent to $6 – or two days’ worth of her husband’s salary.

Faced by this combination of crises, medical staff feel powerless to help as they would like.

“Nine thousands doctors have left the country and the exodus is continuing,” says one of those who stayed, Yamila Battaguni. “I go to work worrying about broken elevators, supply shortages, staffing problems, and only then can I think about how to treat the patients,” she says. “We arrive exhausted even before we start surgery.” 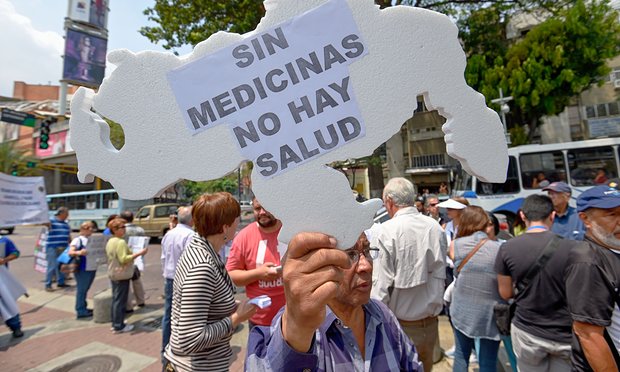 His hope is for political change. “We have two options: leave or be part of the change,” he said. “I hope this bad stimulus can make us want something better.”

Doctors have staged hunger strikes, medical associations have taken to the streets. Earlier this year, a group of 78 civil society groups jointly signed an open letter to the UN secretary general, Ban Ki-moon, demanding the situation in Venezuela be recognised as a humanitarian crisis.

The opposition is also using the health crisis to score points against the government. Its expatriate supporters in Miami, Bogotá and Panama have gathered tonnes of medical supplies, but the authorities have blocked the supplies from entering the country. It has also rebuffed offers of help from international charities and neighbouring countries .

Maduro insists it is not needed. “I doubt there is anywhere in the world, with the exception of Cuba, with a better health system than this one,” the president said earlier this year.

Such reassurances provoke grim laughter among doctors. “We are back in the dark ages in this country. Every day there is a tragedy. Every day children die,” Battaguni says. “We are facing a humanitarian disaster, no matter what the government claims.”