Kashmir & Palestine: Both Occupied, Both Victims Of The Military-Industrial Complex 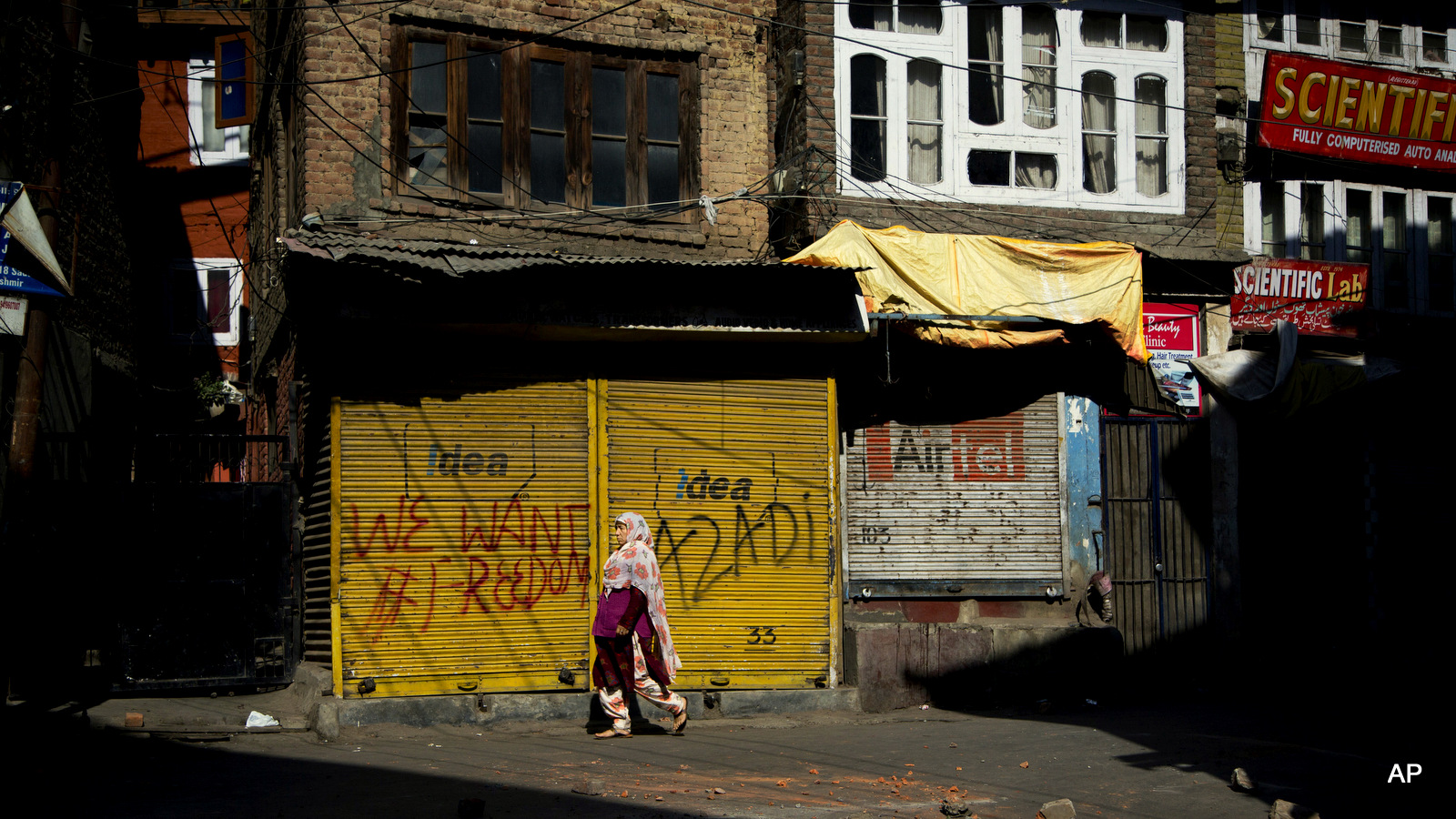 The struggle for liberation of both Palestinian and Kashmiri people began in the late 1940s during the waning days of British colonialism.

AUSTIN, Texas — Although their homelands are separated by almost 2,500 miles, Palestinians and Kashmiris share a struggle for liberation and the right to self-determination against occupying forces backed by the might of the American military-industrial complex.

While the shrinking Palestinian homeland dwindles in size among Israel’s ever-expanding illegal settlements, Kashmir is caught on the border between India and Pakistan, both of which would lay claim to the land despite members of the Kashmiri ethnic group supporting independence.

The Kashmiri have been in the middle of three wars between India and Pakistan since the British partition of the region in 1947. In one of the biggest parallels between their mutual struggles against colonialism, Palestinians have spent the last 68 years resisting the displacement caused by the British-mandated creation of Israel. Like Palestinians, Kashmiris are treated as second-class citizens in their own land, which has become one of the most intensely militarized borders in the world.

“There are about 500,000 military personnel in the region — in other words, one soldier for 25 civilians. The Jammu and Kashmir Coalition of Civil Society reports more than 70,000 killings, about 10,000 enforced disappearances and 7,000 mass graves.”

While the U.S. government sometimes makes token objections to Israel’s occupation and continued expansion into Palestine, the Israeli military is currently backed by over $3.1 billion in annual aid. This figure will increase to $3.8 billion annually under the terms of a recent agreement, and that doesn’t even include U.S. financial support for Israel’s Iron Dome missile defense system.

Although India receives far less in direct military aid, it is a top recipient of economic aid from the United States and, as a weapons buyer, a key player in the American military-industrial complex. In 2014, India became the second-biggest buyer of U.S. military hardware, just behind Saudi Arabia. In April, Reuters reported India was in talks to purchase Predator surveillance drones from the United States.

Kashmir & Palestine in a global context 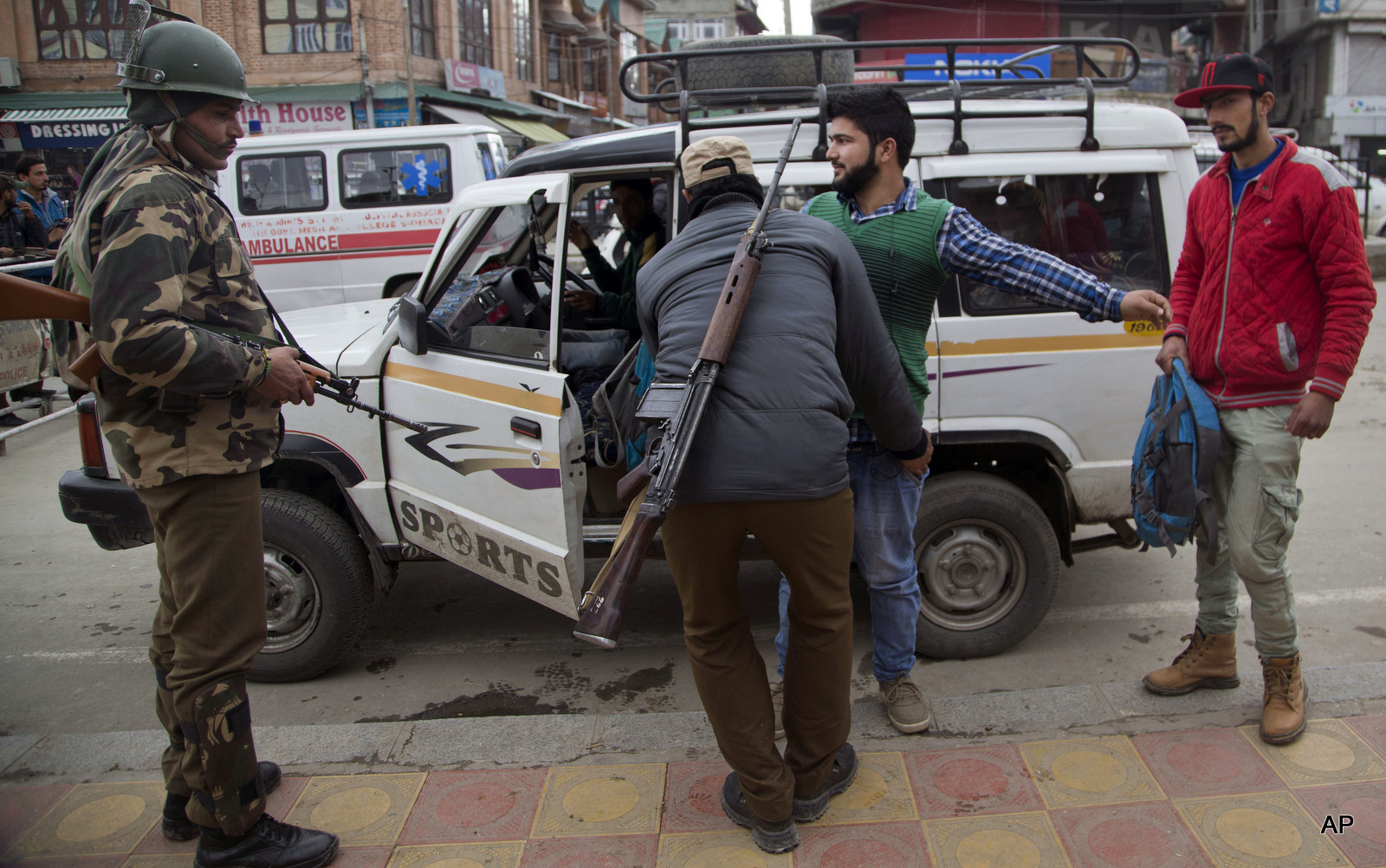 When members of either group fight back against apartheid-style policies, whether through nonviolent protest or in direct retaliation to state violence, they tend to be deemed “terrorists” by mainstream media. This terminology doesn’t just obscure their right to fight for independence from occupation, it also supports their continued oppression. Osuri noted:

“This terror frame supports the economy of arms trade between India, Israel and the United States. In this story … Kashmiri and Palestinian quests for self-determination are reduced to neighbouring Muslim or Arab states causing unrest.”

To understand the similarities between Israel and Palestine, Osuri urged that current events be viewed “in a longer context.” Israel is a key ally in the Middle East, helping further the U.S. agenda of controlling the Middle East’s fossil fuels and even guiding foreign policy in the region.

The United States, meanwhile, seeks to deepen its ties with India as a way of putting pressure on Russia and China. Together with Brazil and South Africa, the five nations have formed the powerful economic alliance known as BRICS, but the United States hopes foreign aid and arms can woo India into an alliance with NATO instead.

Because the United States depends on maintaining a strategic alliance with both Israel and India, both nations are free to oppress Palestinians or Kashmiris with near impunity.

Watch “‘Empire Strikes Back’: Eric Draitser On Western Destabilization Of BRICS” from MintPress News’ “Behind the Headline”:

“Since the 1990s, through a decade of armed struggle against the Indian state, state violence in Kashmir has taken its toll,” Osuri wrote, noting a recent crackdown by Indian forces in which hundreds were blinded or maimed by pellet guns. Osuri reported:

“The dead numbered more than 70, and 6,000 or more were injured. These numbers continue to rise. Yet, Kashmiris continue to protest against the Indian state and call for Azadi (freedom).”

By comparison, Israel’s attack on Gaza in the summer of 2014 left about 2,200 dead, including about 500 children, and at least 500,000 homeless. Palestinians live under a military occupation enforced by similarly overwhelming numbers of troops, and are forced to travel through military checkpoints to move almost anywhere, including commuting to work. Everyday items like musical instruments, crayons, and construction materials are routinely turned away at the borders. 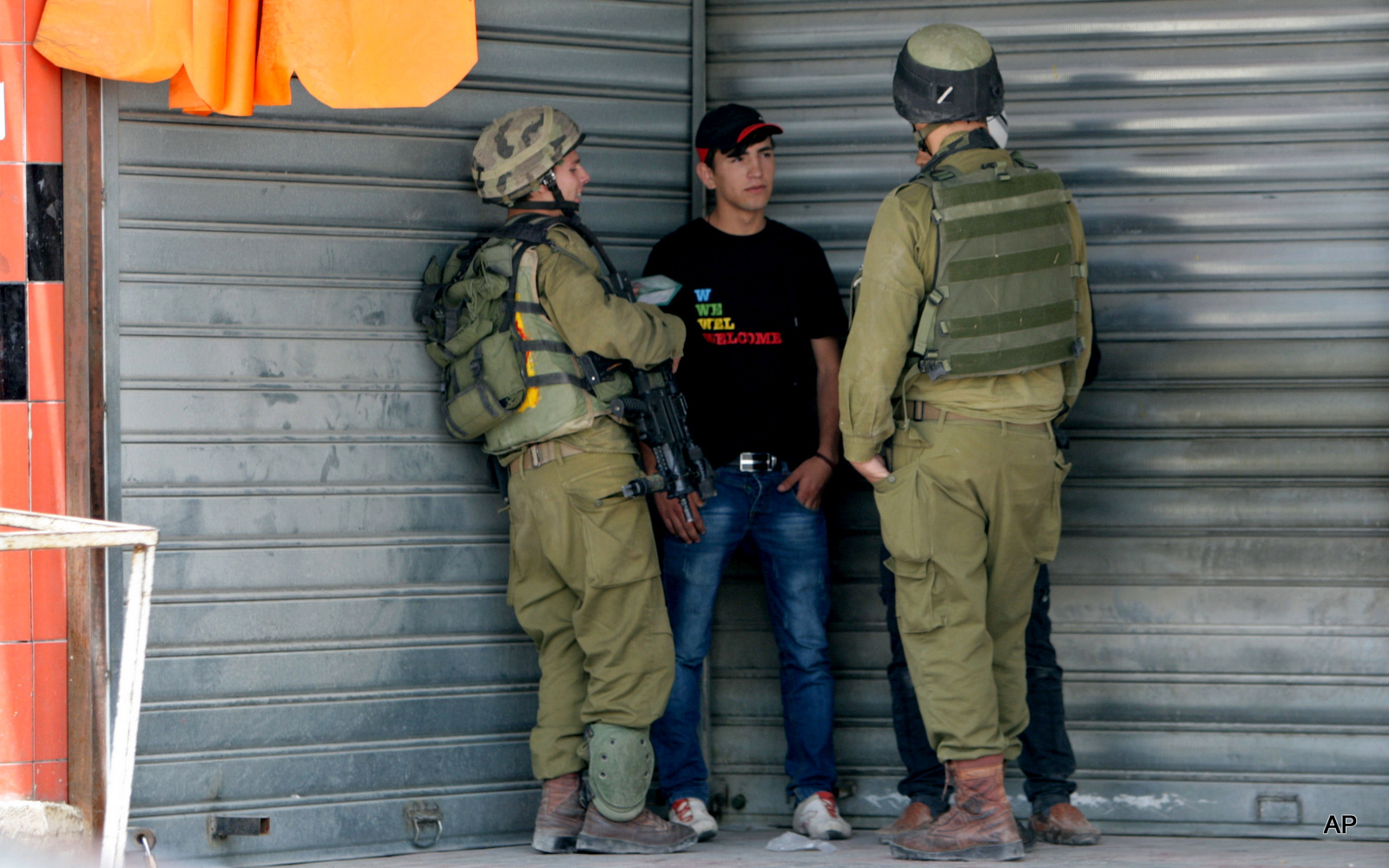 Israeli soldiers check the IDs of Palestinians near an Israeli checkpoint near Nablus, in the Israeli occupied West Bank, Tuesday, June 3, 2014.

The United Nations has repeatedly condemned the actions of the occupying powers of India and Israel as war crimes, yet this has failed to result in any measurable improvement in the human rights of the Kashmiri or Palestinian peoples.
By parroting government narratives which paint freedom fighters as terrorists and convincing the audience that occupied people’s struggles for freedom are equivalent to the military force keeping them oppressed, the mainstream media also plays a crucial role in glossing over war crimes.
‘Most Kashmiri favor independence’ 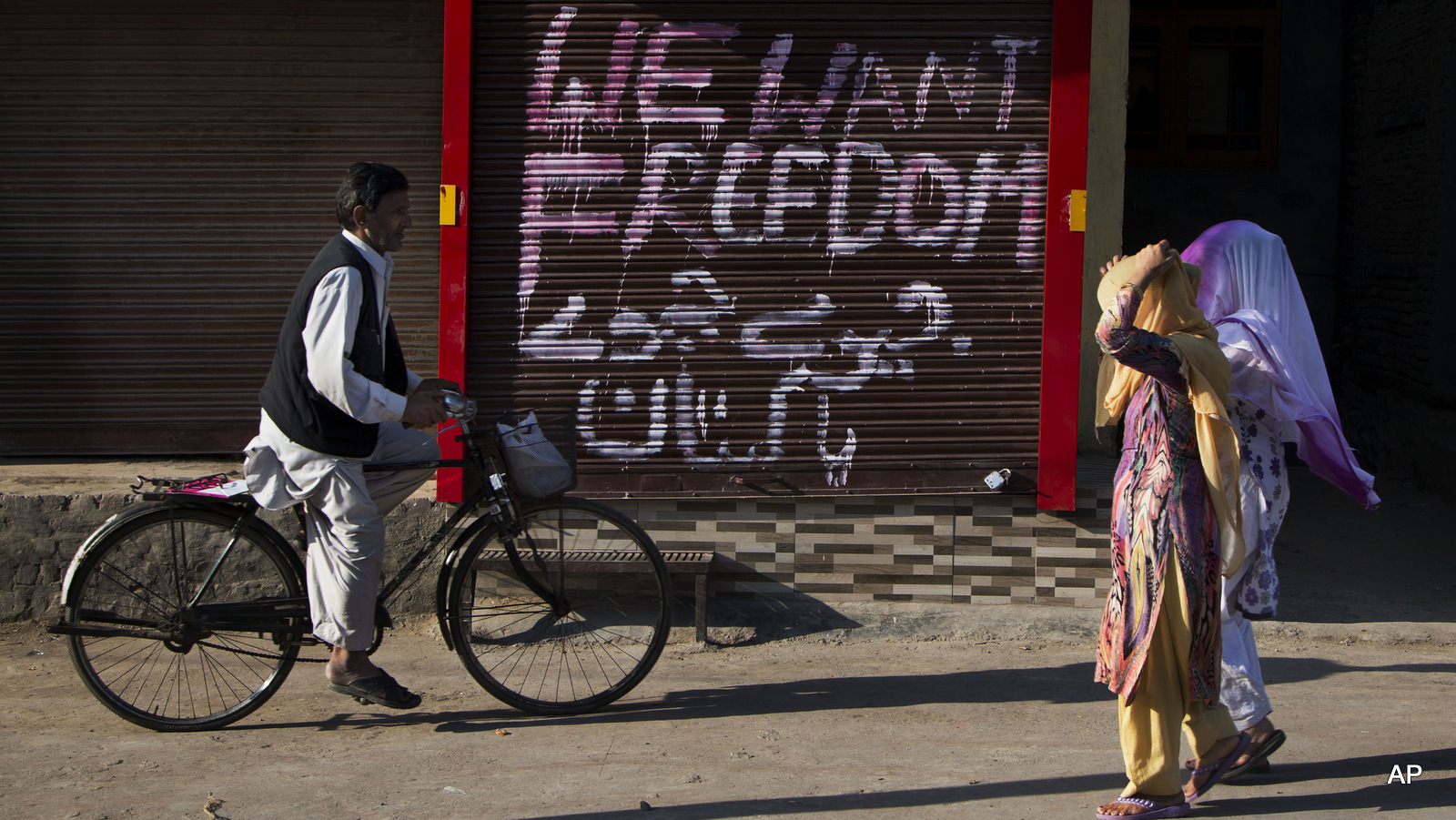 Kashmiri women walk past a closed market with graffiti painted on the shutter of a shop in Urdu that reads “Long live Pakistan” in Srinagar, Indian occupied Kashmir, Thursday, Sept. 29, 2016.

“Despite a long history of wide cultural and trade links the people of Kashmir share with Pakistan, which precede its modern creation as a nation-state, most Kashmiri favor independence from both India and Pakistan,” noted Tariq Mir, a journalist based in Pakistan, in an analysis published on Sept. 26 by Boston Review.

The latest wave of protests and unrest began with the death of Burhan Muzaffar Wani, the 22-year-old leader of the Hizbul Mujahideen insurgency who was killed by Indian paramilitary police on July 8, during the third day of an Eid al-Fitr celebration, one of the most important holidays in Islam.

Kashmiris tend to divide their support between resistance groups representing various ideologies, including the Jammu and Kashmir Liberation Front, which seeks independence for Kashmir. The Hizbul Mujahideen insurgency is a pro-Pakistan resistance group influenced by Jamat-i-Islami, a group linked to the Muslim Brotherhood. Despite these differences, according to Mir, “for the most part populist sentiment continued to favor all Kashmiri guerilla fighters, regardless of their particular political bent, so long as they resisted India.”

As news spread of of Wani’s death thousands flooded the streets of Tral, his hometown. “Soon as many as 250,000 people—perhaps the largest gathering in Kashmir in recent times—packed the town’s narrow streets, open fields, and orchards,” Mir wrote.

Mourners chanted, threw rocks, and burned a few outposts of India’s paramilitary police. The crackdown was swift and severe, sparking protests in which acts of police brutality were reported.

Though State Department officials have voiced their concerns about violence in Kashmir in the past, the most recent series of events and others have unfolded without any substantial action from the U.S. government.

“The small but growing pockets of solidarity expressed for Kashmiris are heartening, as is the international solidarity for Palestinian struggle.

Joining the dots between the occupations of Kashmir and Palestine shows the need for a greater solidarity between these two sovereignty struggles.”

In October 2011, journalist Tara Dorabji visited Kashmir to report on tensions that continue to simmer even between moments of popular uprising. Dorabji wrote:

“The torture and death can be buried no longer. … Kashmiri children grow up watching graveyards populate their villages. As people are buried, the community holds their story, the memory. Oral history is their biggest weapon against India’s brutal occupation. Even under occupation, the stories of the dead cannot be silenced.”

Dorabji saw great hope in the future of Kashmir to create a new kind of indigenous-led nation, writing:

“Perhaps if the nonviolent, popular movement of Kashmir is allowed self-determination a new brand of democracy will be born: a democracy that is not founded on control through military domination—one that does not wave the flag of democracy to cover up genocide.”

Years later, and with many more dead, that hope for self-determination remains a dream for both Kashmiris and Palestinians.

Watch “Mnar Muhawesh & Sut Jhally on Israel’s ‘Occupation of the American Mind’” from MintPress News’ “Behind the Headline”: