Israeli PM says UN body has lost its legitimacy by adopting resolution that rejected Jewish ties to the holy site. 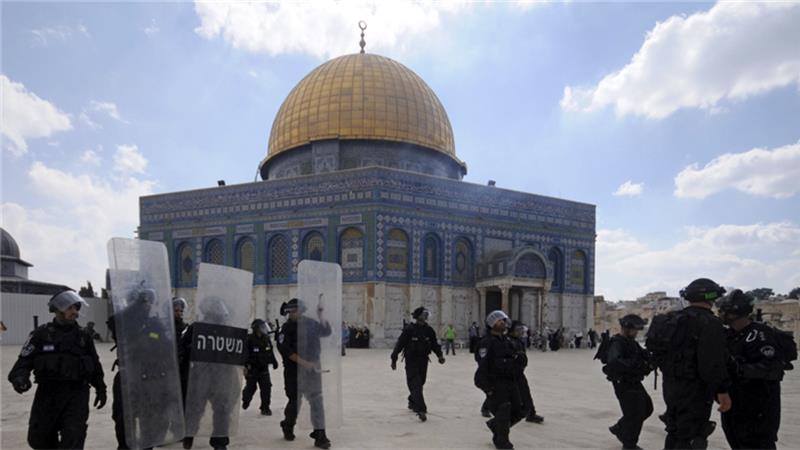 Israel has suspended cooperation with UNESCO a day after the United Nations cultural body passed a resolution that sharply criticised Israeli policies around the al-Aqsa Mosque compound, while supposedly rejecting Jewish ties to the holy site in occupied East Jerusalem.

The resolution condemned Israel for restricting Muslims access to the site, and for aggression by police and soldiers. It also referred to Israel as an “occupying power”.

“This is an important message to Israel that it must end its occupation and recognise the Palestinian state and Jerusalem as its capital with its sacred Muslim and Christian sites,” said Nabil Abu Rdainah, a spokesman for Palestinian President Mahmoud Abbas.

Israel and the United States, however, denounced the decision.

“Israel is furious about this resolution by UNESCO because it essentially nullifies any Jewish connection to the al-Aqsa Mosque compound,” said Al Jazeera’s Bernard Smith, reporting from the occupied East Jerusalem.

Inside Story – Is Israel maintaining the status quo at al-Aqsa Mosque?
“The resolution does assert Jerusalem is holy to the three monotheistic religions – Judaism, Islam and Christianity – but there is a special section in the resolution that says al-Aqsa Mosque compound is sacred only to Muslims.

“It does not mention that it is sacred to Jews as well. This is what infuriated the Israeli government.”

Israeli Prime Minister Benjamin Netanyahu said in a statement on Thursday that UNESCO has lost its legitimacy by adopting this resolution.

“The theatre of the absurd at UNESCO continues and today the organisation adopted another delusional decision which says that the people of Israel have no connection to the Temple Mount and the Western Wall,” Netanyahu said.

Why is al-Aqsa Mosque compound a recurrent flash point?

The resolution, which was submitted by Algeria, Egypt, Lebanon, Morocco, Oman, Qatar and Sudan, was voted through on Thursday with 24 votes in favour, six against, and 26 abstentions.

Estonia, Germany, Lithuania, the Netherlands, the United Kingdom and the United States voted against the resolution, while China, Russia, Mexico, South Africa and Pakistan among others voted in favour.

“The heritage of Jerusalem is indivisible, and each of its communities has a right to the explicit recognition of their history and relationship with the city,” she said in a statement.

Jerusalem’s Old City was designated a World Heritage site because of its “universal value … which is an appeal for dialogue, not confrontation”, Bokova said.

After the vote, the US voiced displeasure saying it “strongly opposed” the resolutions.

“We are deeply concerned about these kinds of recurring politicised resolutions that do nothing to advance constructive results on the ground, and we don’t believe they should be adopted,” State Department deputy spokesman Mark Toner said.

The status of Jerusalem is the thorniest issue of the decades-long Palestinian conflict.

The al-Aqsa compound is the third-holiest site in Islam. It is located in East Jerusalem, which Israel annexed in 1967 – in a move never recognised by the international community – as part of its occupation of the West Bank.

Jewish settlers and hardline right-wing Zionist organisations have called for control over the mosque compound.

Jewish groups refer to the site as the Temple Mount and their increased incursions into the mosque compound have triggered Palestinian protests across the occupied West Bank, including East Jerusalem, and the Gaza Strip.