Iraq: Thousands displaced as battle for Mosul rages on 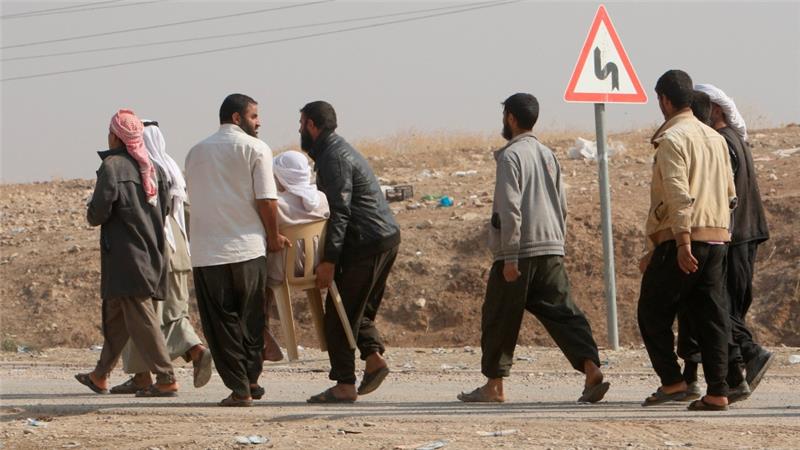 Iraqi civilians have had to make the dangerous journey fleeing the violence on foot [Reuters]
More than 10,000 Iraqis have fled their homes since the start of an offensive to retake Mosul from ISIL this month, according to the UN.

That figure is just a fraction of the displacement that aid groups expect to see when Iraqi forces reach the city limits and some of the million-plus people thought to be inside attempt to flee.

“At least 1,000 people were evacuated by [Iraqi] counterterrorism forces from their villages,” Dekker added. “These are terrifying times for those people – their houses are shaking, and they are being caught in the crossfire.”

And while those evacuated by the elite Iraqi unit were guided to nearby camps, there “are no humanitarian corridors” to manage the thousands more being displaced, Dekker said.

“Many other people are making this terrifying journey on foot.”

But, though the number of displaced Iraqis has increased rapidly over the past two days, there was no sign an exodus of larger proportions was beginning.

The aid community has been scrambling to build camps and bring equipment to areas on the edges of the Mosul battlefield, a vast area where Iraqi forces are closing in on the Islamic State of Iraq and the Levant group (ISIL, also known as ISIS) from the north, east and south.

Strong resistance from ISIL has made the battle slow and dangerous, but Iraqi and Kurdish Peshmerga forces have retaken 90 villages and Iraqi government troops have gotten within six kilometres of Mosul on the eastern front.

Iraqi forces on Thursday retook the town of Rutba in western Iraq, where Shia militias reportedly forcibly displaced 60 families who they accused of collaborating with ISIL.

Meanwhile, the Peshmerga have concentrated their attack in the northeast, on the town of Bashiqa.

US-led coalition forces have been supporting them by hitting parts of the town with air strikes.

The US Secretary of Defense, Ash Carter, said on Wednesday that despite the slow progress, there were no plans to add more troops to the battle.