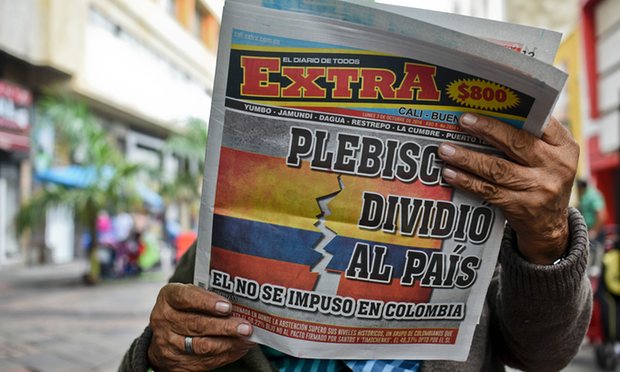 Colombia has begun grappling with the astonishing rejection by voters of a peace deal to end 52 years of war with Farc guerrillas, after a referendum on Sunday which has thrown the country into a state of confusion and uncertainty.

Reeling from the stunning defeat for the deal that took four years of arduous negotiations to conclude, both the government and the Farc have said they will persist in seeking peace for the country after 50.2% of voters rejected the agreement, to 49.7% who approved it.

“Peace is here to stay,” Rodrigo Londoño, the Farc commander-in-chief known by the nom de guerre Timochenko, said in a video statement from Havana on Monday, adding that the rebel group’s members would not return to hostilities in a war that has cost more than 220,000 lives and displaced more than 6 million from their homes.

His comments echoed a speech after the results were released on Sunday night by Colombia’s president, Juan Manuel Santos, who has staked his presidency on the peace deal. “I will not give up.”

The no campaign, led by Santos’s arch-rival and former president Álvaro Uribe – who has been the most stringent critic of the president and the peace deal – has said the plebiscite results give the government a mandate to renegotiate the accord with the Farc.

But in a hint of the difficulties to come, Timochenko indicated that the guerrilla group would insist on the peace deal that has already been signed. “We remain faithful to what has been agreed to,” he said.

While those who voted no continued to celebrate the outcome, those who had been sure of a yes win could not hide their sorrow, disbelief and concern.

“The plebiscite was magnificent because this means that the president can’t hand over the country to the Farc on a silver platter like he wanted to,” said Luis Bernal, 47, a doorman at a residential building in Bogotá, echoing a common refrain of those who felt the government had been too soft with the guerrillas in negotiations.

But César Ramos, who voted yes, said he was staggered by the outcome of the vote. “I woke up depressed. I was so hopeful that today Colombia would be different,” said the 19-year-old university student. “Things are going to get very difficult now.”

Things have always been difficult in Corinto, a small town in Cauca province that has lived for decades in the crossfire between the Farc and the military. People there, as in many of the areas hardest hit by the conflict, voted overwhelmingly for yes.

Gustavo Manrique said few people in Corinto could understand how the rest of the country rejected the peace deal. “This shows just how divided we are as a nation,” he said in a telephone interview from his home. “Now we are filled with uncertainty. Will the bombs start falling on us again? Are we going back to the bad old days?”

Both the Farc and Santos have said they will maintain a bilateral ceasefire that has been in place since 29 August. But it is unclear how long the truce can last in the current political atmosphere.

The government’s top two negotiators flew to Havana to take stock of the political landscape in emergency talks with the Farc leadership, while Santos named three negotiators for bilateral talks with Uribe’s Democratic Centre party to try to salvage the peace process.

“With a willingness for peace I’m sure we can find solutions that are satisfactory for all,” Santos said. “We will have to act quickly and set deadlines because the uncertainty and the lack of clarity about what comes next puts at risk everything that has been built.”

Uribe, speaking in the Senate, said the Democratic Centre “has the will for dialogue” but wondered if the government commission would “have the will not just to listen but to introduce modifications” to the text of the accord with the Farc.

On Monday he proposed that Congress seek to grant an amnesty to the majority of Farc members not involved in serious crimes within the current legal framework and to offer “effective protection” for Farc fighters, though it was unclear if those measure were part of his plan to fix the agreement.

Andrew Reiter, a professor at Mount Holyoke College who studies why peace treaties fall apart, said the result of the plebiscite was a “significant blow to that country’s prospects for peace”.

“Right now there is still a lot of rhetoric about peace but no one has any concrete plans about a way forward,” he said.