Turkey asks US to arrest Gulen for ‘ordering’ coup bid 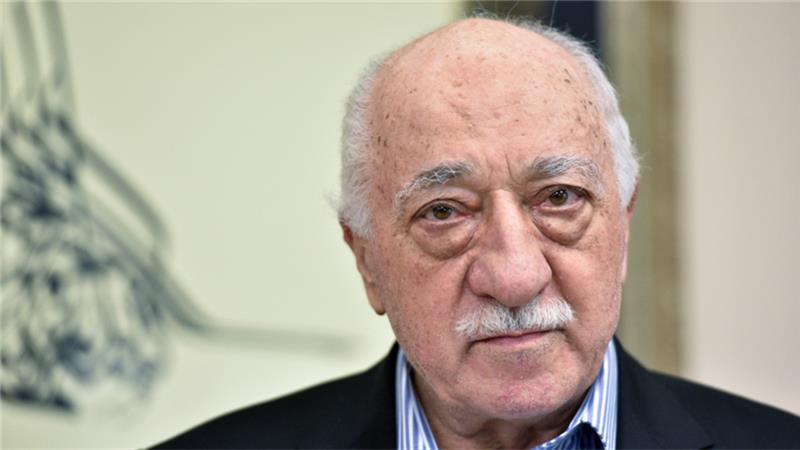 A delegation of US officials visited Ankara late last month to hold talks over Gulen’s extradition [Reuters]
Turkey has asked Washington to arrest a US-based religious leader and businessman for allegedly masterminding a failed attempt to overthrow the government, according to state media.

The Turkish justice ministry formally demanded that US authorities arrest Fethullah Gulen on charges of “ordering and commanding the attempted coup”, the state-run Anadolu news agency reported on Tuesday.

President Recep Tayyip Erdogan and other top Turkish officials have repeatedly appealed to the US government to extradite Gulen, sending them documents which allegedly show evidence of his involvement in the failed coup attempt on July 15.

Gulen has denied any involvement in the coup bid.

A delegation of US officials visited Ankara late last month to hold talks over Turkey’s request for Gulen’s extradition.

The development marked the first concrete and public sign of progress in Turkey’s efforts to get him returned to the country.

When US Vice President Joe Biden visited Ankara several weeks later, he said he understood the “intense feeling” in Turkey over Gulen.

The US has “no interest whatsoever in protecting anyone who has done harm to an ally. None,” he said.

“But we need to meet the legal standard requirement under our law,” he added.

Turkey says that supporters of Gulen within the army carried out the failed coup attempt, claiming that they had been running “a parallel state” within the civilian and military bureaucracy that followed the US-based cleric’s orders. Gulen denies the claims.

The US has previously asked the Turkish government for evidence of Gulen’s involvement, saying that the extradition process must be allowed to take its course.

In a statement to Al Jazeera in late August, Yasin Aktay, the deputy chairman of the ruling Justice and Development Party, said that Washington’s reluctance to return Gulen to Turkey, or arrest him, was unacceptable.

“It is bizarre for us that they [the US] have not been convinced, considering the scope of evidence we presented to them,” Aktay said.

“The testimony of the suspects who were arrested red-handed and documents we gave them are clear. If you add the statements of Gulen regarding the goal of his organisational movement, we believe there is nothing to question. Strong American intelligence should be well aware of who he really is.”

Gulen has had court cases pending against him for several years and Turkey has been demanding his extradition well before the failed coup attempt.

Following the July 15 events, more court cases have been opened against him.