There is no hijab emoji. This 15-year-old student is trying to change that. 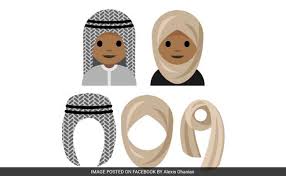 When Rayouf Alhumedhi’s friends wanted to identify themselves to one another in a WhatsApp group chat, they didn’t rely on their names. Instead, each friend used an emoji. “My friends, who don’t wear the headscarf, they found something.” Alhumedhi said. “For me? I had to opt to not use an image of a woman wearing a headscarf. Because there isn’t one.”

And that is something the 15-year-old high school student decided to change. The teenager, who lives in Berlin and is originally from Saudi Arabia, is the lead author on a new proposal for a hijab emoji to the Unicode Consortium, the nonprofit that governs the creation and approval of emoji.

“I wanted something to represent me, alongside the millions of women who wear the headscarf every day, and pride themselves on wearing the headscarf,” she told me Tuesday morning by Skype.

Her proposal, which now has the support of one of Reddit’s co-founders, was promoted Tuesday afternoon in an “Ask me Anything” on the platform.

Particularly for teenagers like Alhumedhi, emoji now are way more than just a fun decoration for digital conversations among friends. They are, increasingly, the conversation themselves. “It’s the new language,” Alhumedhi said.

[Meet the guy trying to turn emoji into a legitimate, usable language]

As emoji-fluent teenagers become young adults, a new visual literacy is weaving itself into the way we communicate with one another online. Oxford Dictionaries argued as much in 2015, when it made the “Face with Tears of Joy” emoji its “word” of the year for 2015.

“Emojis are no longer the preserve of texting teens,” Oxford said at the time. “Instead, they have been embraced as a nuanced form of expression, and one which can cross language barriers.”

Emoji have slowly started to diversify, in response to calls to make the symbols more representative of the people who use them. For instance, human emoji are now widely available with the ability to modify skin tone. And Unicode said in the summer that it would support about a dozen new “professional” emoji that show men and women working in a variety of careers.

“We applaud Unicode for the diversification of emojis in recent years,” Alhumedhi wrote in her proposal draft. “However, this does not mean it should stop now. With the amount of difference in this world, we must be represented.”

The process of proposing a new emoji is a complicated slog of written proposal, revision and committee meetings. It takes a lot of time to get all the way through it, and it’s not exactly intuitive. And that’s not even the end of an emoji’s journey from idea to reality: The individual companies that allow emoji in their operating systems then have to actually design and support them — which is why the same emoji appears differently when sent from an Android phone to an iPhone.

Alhumedhi, having no clue where to start with her idea, wrote a short note to Apple asking for a hijab emoji earlier in the summer. Although Apple has long advocated expanding the diversity of emoji, her request to their customer service department, unsurprisingly, went nowhere. She got on the right track after watching a Mashable story on Snapchat that included instructions on how to propose an emoji.

“I never open Mashable’s stories,” she said. “But one day I was like, ‘Hey, why not.’ So I opened it.” When the story explained that anyone can propose a new emoji to the Unicode Consortium — and gave a couple quick hints on how to get started — she was delighted. “It was like destiny! Really.”

She fired off two quick paragraphs to the consortium on her idea — quite short of the pages and pages of details, designs and considerations that normally go into an emoji proposal. But a member of one of the consortium’s subcommittees reached out anyway about three weeks ago to help Alhumedhi get her idea shaped up for formal consideration.

Her proposal is now nearly seven pages long and has the backing of Alexis Ohanian, a co-founder of Reddit. A graphic artist contributed a proposed design to show what the hijab emoji could look like if adopted and supported, and the subcommittee member is helping with some of the technical considerations that come with any new emoji idea.

Her proposal would create a new emoji — the hijab or headscarf — that could then be paired with a variety of existing human emoji, to display that character in hijab. It works kind of like putting an outfit on a paper doll. This ability to create compound emoji is the same procedure Unicode is using to allow use of the gender-diverse “professional” emoji set.

The headscarf proposal is in its final revisions, and it’s aiming for formal consideration in November. If that happens, and the emoji is approved all the way through the process, it could be announced as a new emoji as early as mid-2017. Different operating systems could begin supporting it later that year.

Intersect newsletter
The corner of the Internet and interesting.
Sign up
While Alhumedhi’s proposal focuses on the potentially massive demand for a headscarf emoji among Muslim women and in Muslim-majority countries, she hopes that, if successful, the emoji would find uses beyond its specific religious meaning. In one section of her proposal, Alhumedhi outlines those different possible meanings:

“•Women wear headscarves across many religions as a sign of modesty, including parts of Christianity and Judaism.

“• This emoji can convey religious feelings.

“• This emoji can represent Ramadan, Eid and any religious celebrations.

“• Women with cancer sometimes like to wear a headscarf; this emoji could come to hand.

“• Or simply a woman that enjoys wearing a headscarf.”

Still, Alhumedhi is anticipating that not everyone will be on board with her idea. “I know for sure that there will be people against this,” she said. “There will be people like, ‘It’s such a trivial topic, why are you worrying about this?’ But once you wrap your head around how influential and how impactful emoji are to today’s modern society, you’ll understand.”