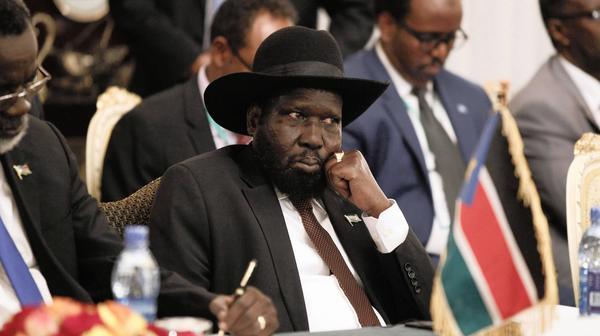 Editor of the Nation Mirror newspaper Simon Aurelious said the publication’s management was accused by the country’s national security officials of “indulging in activities incompatible with its status.”

He added that no other reason was given for the paper’s closure. “When we reached the office of the national security service, they showed us an order which was instructing us to close down,” he said.

The Sentry’s report, the outcome of two year of investigations, revealed how South Sudanese leaders transferred millions of dollars of ill-gotten wealth outside the country while a civil war that has left nearly half the country’s people homeless or in need rages on.

The 66-page document says President Kiir and some of his top associates, along with former vice-president Riek Machar have invested millions of dollars in real estate in Kenya, Uganda and Australia.

“The leaders of South Sudan’s warring parties manipulate and exploit ethnic divisions in order to drum up support for a conflict that serves the interests only of the top leaders of these two kleptocratic networks and, ultimately, the international facilitators whose services the networks utilise and on which they rely,” partly reads the report.

The South Sudanese government dismissed the reports and threatened legal action against the authors of the damning report.

The paper’s closure comes barely a week after the United States ambassador to the United Nations Samantha Power expressed concern over alleged threats by government against activists who met a UN Security Council team that visited South Sudan last week.

In recent months, however, increasing reports of harassment of journalists in South Sudan have raised concern that Africa’s newest nation is reneging on the basic freedoms its authorities promised the population when the country seceded from Sudan in July 2011.

Also, South Sudan government’s failure to pass legislation protecting the media has increased concerns about the state of press freedom.

Since December 2013, more than eight journalists have been killed in the world’s youngest nation, with the Committee to Protect Journalists (CPJ) recently ranking South Sudan as the second worst country in Africa and fifth globally in the impunity index, highlighting the failure to bring persons who kill or attack journalists to justice.

South Sudan was ranked 140th out of 180 countries in Reporters Without Borders 2016 World Press Freedom Index, falling 26 places since the start of the country’s civil war in mid-December 2013.