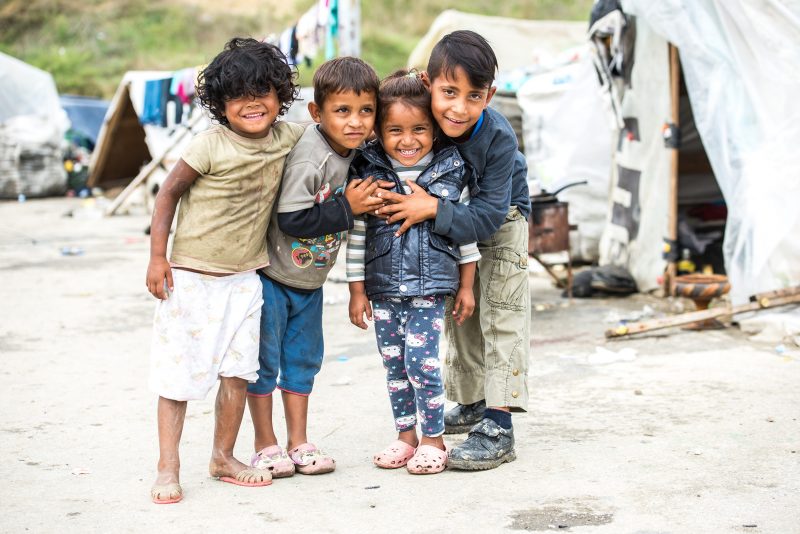 Roma kids left homeless after Skopje city government bulldozed their homes. Photo by Vančo Džambaski, CC BY-NC-SA.
The government of Macedonia’s capital city Skopje evicted 31 Roma families with children from a settlement under the historic Kale fortress over the summer. Authorities not only razed their home for the last nine years, but also reportedly left the families without any realistic support.

Photo-activist Vančo Džambaski published a photo album on Flickr to try to draw attention to their plight. In it, he described the families’ situation:

Without any help from the state institutions, they now reside in an improvised dwelling by the Vardar river. Without electricity, water supply or sewage, with high risk from infectious diseases due to the floods and lack of minimal hygiene conditions, they dread the coming of winter.
In 2011, the state sold the land, which is a prime piece of real-estate, to a private company, the Amadeus Group, for about 100 dollars per square meter. The location is a few minutes walk from the center of Skopje, and the new owners say they intend to build a hotel.

Authorities so far haven’t been moved by the protests of those affected. They have offered to move the homeless group to the dilapidated camp Čičino Selo outside of the city, which the families have refused because it does not have space to house all of them, and the living conditions are worse than living in the open. Most of these people make a living by collecting discarded plastic bottles and food from garbage containers, which then they transport on bicycles. Distance-wise, relocation outside of city limits would severely impede their ability to gather enough plastic bottles to sell to recycling plants to make it through the day. 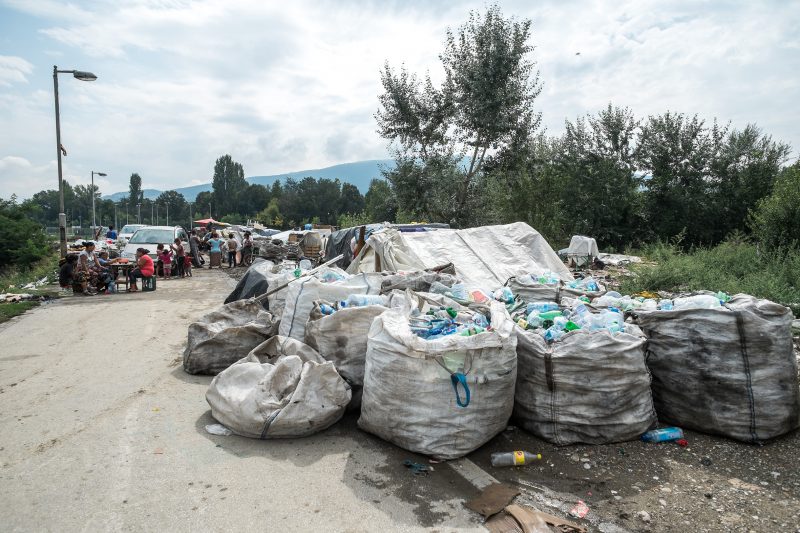 The City of Skopje metropolitan local government tore down the huts on August 1, just a few days before the heavy downpour that caused the recent deadly floods. The authorities made no provisions to temporarily shelter the 121 affected persons, including 64 children. The youngest child at the time was a 2-month-old baby. The homeless people survived the worst storm in recent memory under an open sky, and unfortunately they still have no roof over their heads.
These Roma have received aid from NGOs in the meantime. Foundation Open Society – Macedonia (FOSM) donated around 4,500 dollars worth of supplies.

This urgent measure includes donation of food and drinking water, hygiene products, children’s diapers and other basic products for around 30 Roma families (nearly 130 people) who are now homeless. Among them, there are people without ID, pregnant women, ill persons and children. The objective of this action, which is implemented by FOSM in cooperation the Association for Health, Social and Educational Support “Initiative for Development and Inclusion of Communities” (IDIC), is to meet the current needs of these citizens while they are waiting for the institutions to find a permanent solution for their problem.
Civil society organizations continue to demand that authorities, primarily the Ministry of Labor and Social Policy and the City of Skopje, provide shelter for the homeless before the cold months add exposure to their already rudimentary living conditions. Life in the improvised camp resembles a post-apocalyptic setting characteristic of major natural disaster, such as a devastating earthquake. 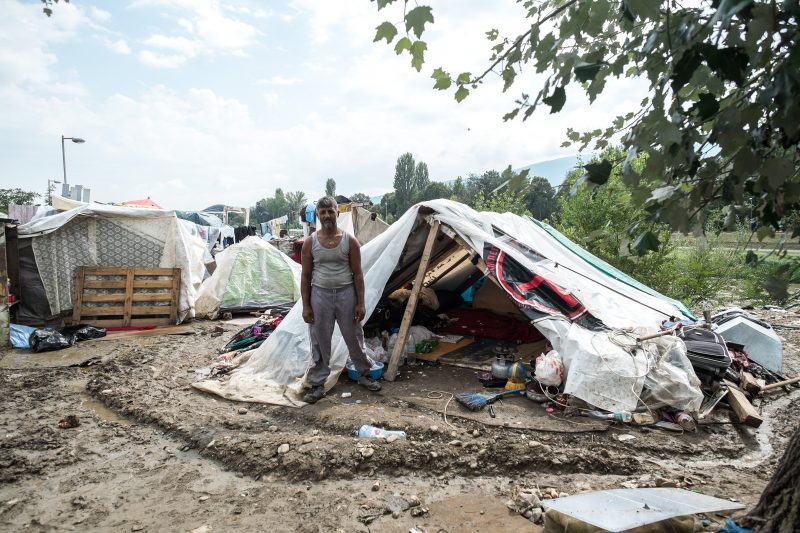 Man stands in front of his tent, located 3 km from the main square in Skopje. Photo Vančo Džambaski, CC BY-NC-SA.