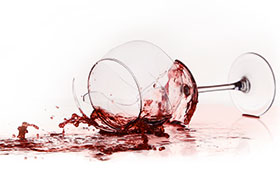 For the first time, trends in alcohol consumption and related mortality have been examined systematically for all countries in the WHO European Region for an extended period. WHO/Europe’s new report “Public health successes and missed opportunities. Trends in alcohol consumption and attributable mortality in the WHO European Region, 1990–2014” shows that over the past 25 years alcohol-attributable deaths increased by 4%.
The European Region ranks highest globally in terms of adult per capita alcohol consumption, and the level and patterns of drinking have contributed substantially to mortality from cardiovascular diseases (CVD), cancer, liver cirrhosis, and unintentional and intentional injury.

There is considerable variability in both alcohol consumption and related harm between Member States. The overall trend in Europe conceals some progress in parts of the Region, where reductions in consumption have been accompanied by lowered mortality. The report presents data at country, regional and subregional levels (country clusters based on drinking patterns and geography).

“Alcohol consumption has fallen in some Member States over the last decade, and resulted in fewer alcohol-attributable deaths in these countries, which shows that it is possible to change drinking patterns. However, relevant data must be available to decision-makers to initiate the most effective policies. In addition, there is still a knowledge gap among the general population about the impact of alcohol, especially on cancer. Closing this gap is important, but there is a need to go beyond passive approaches and push for preventive policies and actions”, says Dr Jürgen Rehm, co-author of the report.

Currently, in some parts of the Region, alcohol consumption accounts for up to 25% of all mortality from liver cirrhosis, cancer, CVD and injury. The report stresses the urgency of reducing the overall level of alcohol consumption and heavy episodic drinking occasions in particular, which are especially detrimental to health.

If countries in the highest-consuming parts of the Region further increase their consumption, the global noncommunicable disease target of a 10% reduction in the harmful use of alcohol by 2025 could be threatened.

The report’s findings reveal the need for action at a policy level. Reducing availability, increasing taxation and enforcing bans on alcohol marketing and sponsorship are evidence-based and cost-effective policy options known as the WHO-recommended “best buys”.

Reducing alcohol consumption can yield gains in many areas of public health. For instance, drink–driving policies and countermeasures such as lowering the legal limit for blood alcohol concentration can reduce deaths from injury. Policy-makers could examine positive examples from Member States and explore the potential of applying good practices in other parts of the Region.