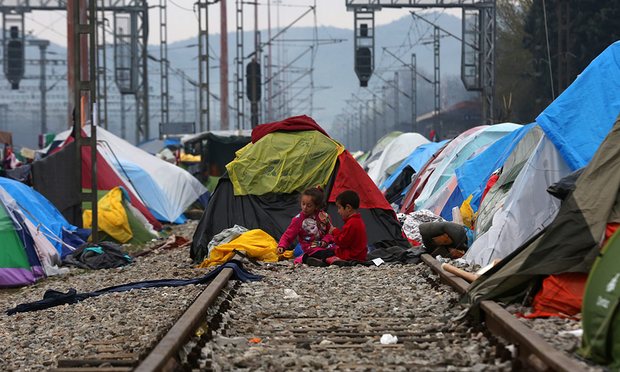 Refugee children from Syria play in a makeshift camp in Idomeni, Greece. Only 5% of humanitarian funding goes on child protection and education, according to War Child. Photograph: Orestis Panagiotou/EPA

Chronic underfunding of aid programmes is having a devastating impact on child refugees around the world, the charity War Child warns, with vulnerable children being “systematically denied” fundamental rights such as access to education or protection from forced marriage.

War Child’s report, I’ve Moved but My Rights Haven’t, says the enormous and growing number of children who are forcibly displaced is making it more urgent than ever to set out a global plan of action for children forced to flee.

Recent research by Unicef says the next 10 years could see an enormous rise in the number of displaced children, with 63 million forced to leave their homes by 2025, more than double the current figure of 28 million.

Hannah Stoddart, director of advocacy and communications for War Child, says the shortage of funding is hitting children particularly hard.

“I’ve just come back from Za’atari [camp] in Jordan where many Syrian refugees have no source of income and often pull their children out of school to engage in illegal forms of child labour. There are zero opportunities for higher education and it’s really sad to see when the young girls have so much ambition.”

Stoddart says the needs of displaced children go beyond the basics of food and water. “Children who have fled violence are suffering extreme trauma … There is acute long-term damage when children are not supported through trauma, or are out of school.” She says there is also a risk of sexual violence, as girls may be married off at the age of 12 because their parents believe it will give them protection.

The global picture for funding all humanitarian response work is one of persistent and chronic underfunding, with appeals for Syria, Afghanistan and Somalia underfunded by around 60%.

But the report notes that children’s services are particularly poorly resourced. Only 5% of humanitarian funding is dedicated to child protection and education. Schooling was the least funded sector in almost a third of countries affected by conflict in 2015, with 73% and 85% of funding needs unmet in Iraq and the Democratic Republic of the Congo respectively in 2015.

Adding to the complex picture of need faced by humanitarian groups working with children is the fact that more young people than ever before are travelling without their families. In 2015, nearly 100,000 unaccompanied minors applied for asylum in 78 countries (pdf), almost triple the number seen the year before. The report warns that in the next 10 years on current trends at least 300,000 child refugees will end up separated from their families.

Stoddart says the projected increase is related to the changing nature of hostilities. “The intensity and the protracted nature of the conflict means there are higher concentrations of people fleeing conflicts that seem to know no end. Syria is an illustration. It is intense, brutal and has been ongoing for six years. If there isn’t a dramatic change then people will flee, children will flee and families will be separated as they seize any opportunity for a better life.”

World leaders are due to meet in New York on 19 September for a high-level summit on refugees and migrants. In a pre-summit statement completed in August, negotiators removed an earlier promise to move one in 10 refugees to the developed world.

Emily Garin, Unicef’s policy specialist, says there will be a concerted effort to put the rights of children at the heart of discussions in New York. “We believe children should be the primary focus. The real tragedy is that children have been suffering because of conflicts not of their making, and that this is not new. There are children born into refugee camps in northern Kenya who are second- and third-generation Somali refugees. We hope we can turn outrage over individual child cases into care for the bigger issue.”