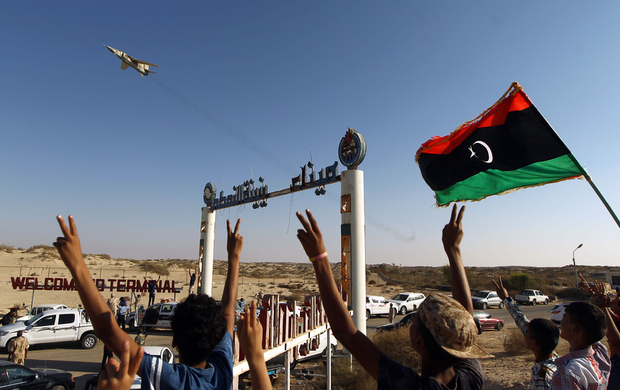 People gesture and wave a Libyan flag as fighter jet flies by at the Zueitina oil terminal on 14 September, 2016. Forces opposed to Libya’s unity government handed management of four vital oil ports to the National Oil Company on 14 September, after seizing them in a blow to fragile peace efforts (AFP)

Across Libya, residents took to the streets this weekend protesting against the UN-backed Government of National Accord (GNA) and the UN’s Libya mission.

Hundreds turned out in Benghazi on Friday in a protest calling for the dismissal of the head of the UN’s Libya mission Martin Kobler and GNA head Fayez al-Seraj. A bomb which exploded near the protest merely increased the numbers of protesters.

Despite a helicopter and low-flying aircraft securing the protest, someone still managed to place a bomb beside an ambulance, although he was arrested shortly after it exploded, Salem said.

“Hundreds more people came and joined the protest after the explosion,” he said. “They were saying, ‘We are going to die today or tomorrow anyway, so we are not afraid and we are not going to leave’.”

Smaller protests against the GNA took place in other towns across Libya, some of which condemned the international community for its stance on the recent takeover of four of Libya’s central oil ports by forces loyal to the eastern government.

The UK, US, Spain, Germany, Italy and France last week released a joint statement condemning the largely peaceful takeover of the oil ports, saying the GNA’s Presidential Council was “the sole steward” of the country’s oil. “Oil infrastructure, production, and export must remain under the exclusive control of the National Oil Corporation (NOC) acting under the GNA’s authority,” the statement said.

“We call for all military forces that have moved into the oil crescent to withdraw immediately, without preconditions.”

The ill-thought-out statement provoked a wave of anger across Libya, and at some protests photocopies of the flags of the countries that made the statement were burned.

The military takeover, followed within days of an official handover to Libya’s National Oil Corporation, had been welcomed by many Libyans, who saw the move as a much-awaited chance for Libya’s oil exports, the country’s main source of income, to resume.

For two and a half years, a single individual – Ibrahim Jadhran, backed by brigades tasked with protecting Libya’s hydrocarbon infrastructure – had kept the oil ports blockaded, costing Libya more than $50bn in lost revenue. Millions of dinars were reportedly paid to Jadhran by successive governments attempting to lift the blockade.

“The success of the oil port takeover is really a disaster for the GNA,” said one former Libyan diplomat, Ibrahim. “They negotiated with Jadhran and gave him LYD34 million to reopen the ports, and then the Libyan Army solved the problem in a week without giving him a single dinar.”

The failures of the GNA to achieve solutions on the ground was also at the heart of protests in the capital Tripoli on Saturday. After a miserable Eid holiday marred by financial hardship and 12-hour daily power cuts in 40-degree heat, frustrated Tripoli residents blocked the capital’s main highway on Saturday, gridlocking the road and causing traffic chaos.

“Eid should be a time of celebration but it was very difficult this year,” complained Tripoli housewife Salma. “Because of the money problems, many families could not afford to buy a sheep and, because of the long power cuts, the meat went bad very quickly.”

For months, Libya has been suffering from an extreme cash crisis, with people forced to queue outside banks for days at a time, just to be able to withdraw a maximum of LYD400. “I work in a bank, so I could get money for myself, so we are luckier than many people, but I couldn’t get it for all my family members,” said Tripoli bank clerk Mohammed.

“Our family had a very modest Eid this year because we just can’t afford our usual celebrations.”

As temperatures soared to over 40-degrees during the Eid holiday, Tripoli’s daily nine-hour power cuts lengthened to 12 hours in many areas. Some families complained they had only five hours of power in between outages, others suffered 16 hour cuts. Libya has struggled with electricity shortages since the 2011 uprising but these have worsened in the last two years.

“This new government has already failed,” said businessmen Hamed, 59. “If they can’t even provide electricity, cash and basic services to people in the capital, how can they hope to provide peace and security?”

He said that problems like the electricity shortages should be easy to fix and speculated that the shortages were deliberate.

“There is something bigger behind all this. There are people in power now who want the Libyan people to suffer and not think about anything except the electricity and lack of money in the banks,” he said.

“I believe all of this is a plan to make the people forget about high-level corruption and to conceal the fact that all of these politicians really just want to get their hands on Gaddafi’s money that is still frozen in accounts abroad.”

Education company manager Taher, 30, described the situation as “difficult but liveable,” and said many people had high expectations of institutions but made little effort to help the situation themselves.

“It’s easy to blame the government or come up with some conspiracy theory but, in all fairness, we have all had a hand in this mess,” he said. “The self-employed don’t pay taxes, most Libyans don’t pay electricity bills, we routinely waste food, electricity and fuel, and we throw garbage in the street.”

Taher insisted that at least some degree of responsibility should start with the individual rather than only the state.

“Public properties are vandalised and electricity cables are stolen, and somehow we expect there to be electricity and fast internet to be fast,” he said. “We have to be more responsible with how we use our resources and how we treat our own country.”

University students have been forced to study for their final exams in sweltering daytime heat and by candlelight at night. Medical student Sara, 22, said campaigning groups of students had managed to get some of the end-of-year exams postponed because of the current living and studying conditions in the capital, but admitted that the problems were only getting worse.

“Life has become so hard here and everybody is looking for a way to leave,” she said. “It is very sad because, for us, family is everything, but we want the chance to study properly and build a future, and it feels as though that has to be somewhere other than Libya.”

This article is available in French on Middle East Eye French edition.