Dying for dollars in Yemen: ‘I can hide from shelling, but I cannot flee from cancer’

Foreign currency reserves in Yemen have been cut to a third of their pre-war levels. Cancer sufferers are among those paying a heavy price. 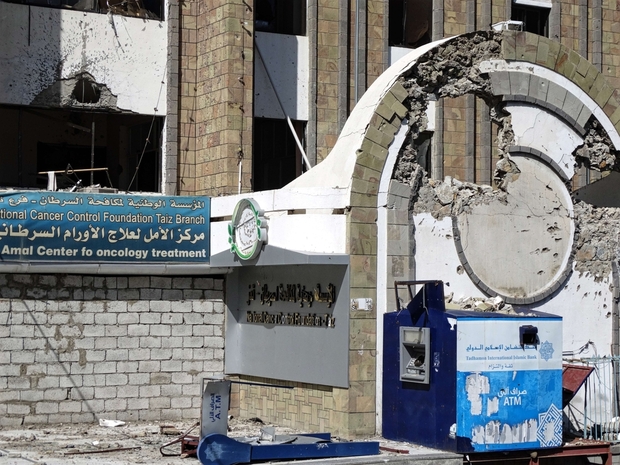 Teacher Abdulatif al-Sanani has for two years suffered from throat cancer, for which he used to receive an injection every fortnight. Then war came to Yemen and with it a sharp reduction in his medication.

Usually the state would fund his treatment at the al-Amal Center for Oncology Treatment in Taiz. But, as Sanani explained, “one year ago, the main centre of al-Amal was damaged by the war, and the new temporary centre cannot provide me with an injection every two weeks”.

Now he receives an injection once a month, sometimes less frequently. It’s hindering his recovery. “Some patients have left Yemen for other countries,” he told MEE, “but I am a teacher and breadwinner for seven family members, so I cannot go abroad. I wait for the injections to come to the centre.”

– Abdulatif al-Sanani, cancer patient
Sanani has to rely on his teaching salary of YR84000 ($336), which is hardly enough to provide his family with basic commodities. He prefers not to ask people to help him pay for his medicine.

Mokhtar al-Mikhlafi, the manager of the facility, confirmed to Middle East Eye that the Yemeni government has stopped providing it with many medicines. It is now reliant on aid organisations instead.

“Since the beginning of the war, cancer patients have not received the required medicines. There is a dire need for several kinds of injections and solutions for radiography. We are working hard to get them from aid groups.”

He added that the lack of treatment had hindered the recovery of patients: some had died as a result.

In August, Jamie McGoldrick, the UN Humanitarian Coordinator in Yemen, said that 40,000 cancer patients across the country have had their medication cut for one reason: the country no longer has the foreign currency to buy essential drugs.

“Humanitarians have been called on, once again, to fill the gap in the provision of basic social services, increasing the need for greater resources from the international community,” he said.

When the fuel exports stopped, so did the dollars

The economic stability of any country depends on its foreign currency reserves: when most of its national income grinds to a halt because of war, then a monetary crisis usually follows.

Yemen used to depend on fuel exports to supply it with cash from abroad; some foreign currency also came through embassies. When conflict broke out, the full-time production of fuel stopped. Most embassies in the capital Sanaa closed their doors.

Now Yemen is dependent on money transfers from overseas, donations from international aid organizations and foreign currency reserves to import food and other basic commodities. 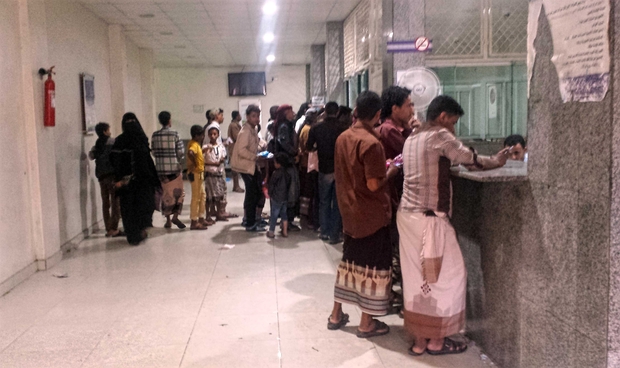 Customers wait in line patiently at a Yemeni money exchange (Nasser al-Sakkaf/AFP)
McGoldrick said in mid-August that the “depletion of foreign currency reserves in the Central Bank has resulted in the difficulty for importers to obtain lines of credit, making it nearly impossible for government entities to maintain basic social services”.

That Central Bank, based in Sanaa, is currently under the control of the Houthis, who captured the capital in September 2014. Its governor, Mohammed bin Humam, was appointed before the current conflict erupted and has not sided with any group in public.

An anonymous source within the bank, who is not authorized to speak to the media, told Middle East Eye that the country could not provide the necessary social services.

“Yemen’s national income has stopped since the beginning of the war in March 2015,” he said. “If the international organizations and other countries will not help us, then Yemen will go to economic ruin soon.”

Public projects have been scrapped

In April 2016, Prime Minister Ahmed Obaid bin Dagher said that foreign currency reserves had dropped from $4.2bn before the Houthi takeover to $1.3bn, less than a third of their previous value.

The source at the bank told MEE that the Central Bank spent its foreign currency reserves during the last 16 months on basic commodities, including wheat, rice and sugar, as well as to service its foreign debt.

Yemen imports more than 90% of its food: around 21 million of its estimated 25 million population are now in need of humanitarian aid, and more than half the people suffer from malnutrition, according to UN reports. 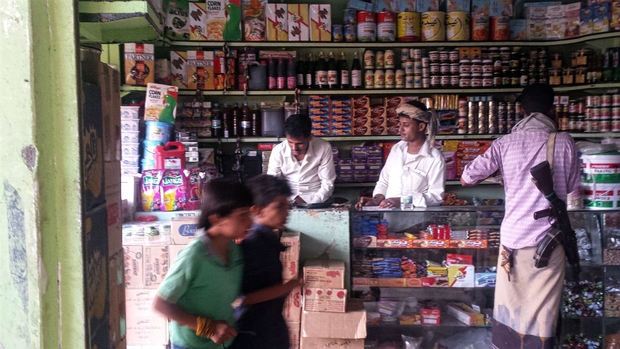 Stores are among those which have been hit by currency fluctuations (Nasser al-Sakkaf/AFP)
The source added that the situation was worsening daily: the Central Bank stopped supporting medication and fuel last year and cannot support the basic commodities for next year.

The Houthis were not to blame for the economic crisis, the source said, as they alone cannot solve the crisis, although they run much of the country and are currently responsible for paying public sector salaries. Most public projects, such as the building of offices, roads and schools, have been halted. There has been no annual budget set for 2015 and 2016.

“Saudi Arabia helped the Central Bank in 2012 by supporting it with a $1bn deposit,” the source said. “Now we need another deposit from any country to revive the economy as an urgent solution. Then the warring sides have to stop fighting to resume production and exportation of fuel.”

Conflict between PM and Central Bank

But the office of Prime Minister bin Dagher takes a different view.

On 6 August, an official for the prime minister told the Saba News Agency: “The prime minister has certain information from local and international sources that the leadership of the Central Bank resorted to using the foreign currency reserves in the international banks in America and Europe. This was after it depleted the foreign currency reserves in the Central Bank of Sanaa and al-Hodeida for fighters.

And on 30 July, bin Dagher asked the International Monetary Fund (IMF) to stop dealing with the Central Bank, to freeze its funds until further notice and to stop accepting the signatures of bin Humam. “Yemen’s Central Bank is using the country’s foreign currency reserves in an irresponsible manner,” the letter read. The IMF continues to work with the Central Bank of Yemen.

The government said that bin Humam could not be neutral as the bank is under the control of the Houthis. On 8 August, bin Humam dismissed the charges in a letter to Yemeni President Abd Rabbuh Mansour Hadi. He described the allegations as “baseless” and said that the bank, while independent of the prime minister, followed IMF protocol, and used its reserves responsibly. He requested the president talk to the IMF about appointing an independent auditor.

How the black market is flourishing 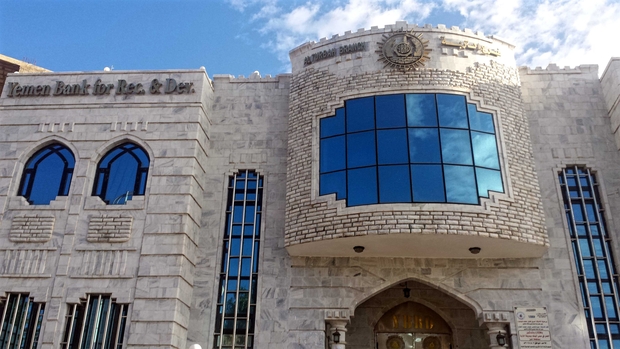 The Yemen Bank for Reconstruction and Development (Nasser al-Sakkaf/AFP)
The impact of currency has also been felt on the streets of Yemen. In March 2016, the Central Bank reduced the value of the Yemeni rial against the dollar from YR215 to 250, after the country’s foreign currency reserves decreased. The Central Bank of Yemen reported that the Yemeni rial depreciated by 16.3 percent in April.

As the Central Bank cannot provide Yemeni banks with dollars, so traders and importers of basic essentials have resorted to the black market to buy the US currency. There, one dollar will cost around YR300.

Tamer Ahmed Said, the deputy of the Yemen Bank for Reconstruction and Development in Taiz, said his bank buys dollars for only YR251, but the bank does not have enough dollars to sell: customers now withdraw their foreign currency from the bank and instead sell it on the black market.

– Tamer Ahmed Said, banker
The Central Bank tried to fight back against the black market, but it proved hopeless. “The Central Bank directed us to pay the transfers from abroad only in Yemeni rials last year” said Ahmed Said. “But then people resorted to sending their money via money exchange companies.

“In April 2016, the Central Bank allowed the banks to pay in dollars in order to encourage immigrants to send money to Yemen. But the problem will continue until the Central Bank provides us with dollars.”

The black market has now replaced the banks when it comes to changing dollars, said Ahmed Said, adding that one sure sign of an economic crisis is when the Central Bank cannot manage the economy.

Lack of currency is a matter of life and death

Abdulhadi al-Samei, a trader of foodstuffs such as tomato sauce, said the rise in the dollar was the main reason for the increase in prices, with nervous traders increasing their prices because they cannot rely on the value of the US currency on the black market.

We cannot trust the value of the black market, so we are forced to increase the prices of what we sell

– Abdulhadi al-Samei, trader
“Nowadays, I am buying the dollar for YR310,” he explained. “Sometimes it increases to YR320, sometimes it drops. This means we cannot trust the value of the black market, so we are forced to increase the prices of what we sell, as if the dollar was at YR350.”

He added that some businessmen had been bankrupted, buying goods cheaply prices, only then to find out they could not import new goods because of the rise in the dollar on the black market.

But for the likes of Sanani, that lack of currency has become a matter of life and death.

“I hope war will end soon and then I will get enough injections again. I can hide from shelling, but I cannot flee from cancer, as it is in my throat.”